Rhys Ryan from the Human Rights Law Centre fills us in on the current counter terrorism reforms.

Mohamad Tabbaa discusses the recent terror raids and their impact on the Muslim community.

Despite the fear of racism and intolerance, Mariam Issa shares her story of deciding to open up her garden to encourage tolerance & resilience within her new community.

Since September 11, 61 new national security laws have been introduced in Australia. A climate of fear spurned on by political rhetoric & sensationalistic journalism has seen new counter terrorism laws pushed through parliament, highly publicised police raids and a visible surge in racist sentiment and incidents towards Muslims. With this backdrop in mind, the Right Now Radio team and guests attempt to navigate and analyse the frenzied political & social climate in which Australia finds itself currently in.

The government is currently undergoing the most significant changes to Australia’s national security in more that a decade. Rhys Ryan & Emily Howie unpack what these reforms mean & how they could infringe on the basic liberties of journalists & individuals travelling to declared “no go” zones.

In the midst of a heightened terror alert, controversial powers that were due to expire have been extended to ASIO, alongside the newly proposed laws. The government’s expert body, The National Security Legislation Monitor recommended to repeal some of these laws as they clearly posed an unacceptable threat to personal liberties & had not proved their effectiveness. Are these laws knee jerk reactions to perceived threats or thorough safeguards for security?

To find out more you can read The HRLC’s report here: “Human Rights Impacts of the Foreign Fighters Bill.”

NOTHING TO HIDE? NOTHING TO FEAR? NOTHING IS THAT SIMPLE – MOHAMAD TABBAA

Mohamad Tabbaa begs to differ, “I think with our track record, there is plenty to fear if you have nothing to hide.” Tabbaa argues that it is not as simple as saying, if you are not a criminal, you won’t be harassed. He points to a number of reasons, including the recent police blunder where a plastic sword was wrongly identified as a terrorist weapon; or to the fact that the majority of those arrested in recent raids where shortly released without being charged. The conversation must be more nuanced and address the broader issues at play of racism & islamophobia prevalent within the police force & in the wider community.

Tabbaa has heard personal stories of police misconduct during raids on families. He spoke to a family forced to sit on their couch for eight hours without food of toilet breaks. “Another family told me, police would just be tearing things apart, a simple house lamp would be torn apart, all the perfumes just thrown to floor, breaking. Things like that, really you give the sense that it’s more about intimidation and harassment than about finding evidence, or perhaps in tandem with finding evidence.”

Why don’t these people speak up about police misconduct? Speaking out is hard when you no longer have faith in the systems that protect you & also when you simply want the attention on your family to be gone.

Tabbaa explains, A split has emerged in the Muslim community between the “good moderate Muslim” & “bad radical Muslims.” These two polarised Muslim voices have been pitted against each other to become an effective way of curtailing dissent. Tabbaa discusses how this rift has amplified one voice, where you can only speak as a “good Muslim.” Being a “good moderate Muslim” is dependent on you being “uncritical towards government & being supportive of police action.”

Recent police raids have heavily impacted on re-enforcing this rift, effectively limiting dissent & infringing on Muslims being able to freely enter into the debate & speak out. 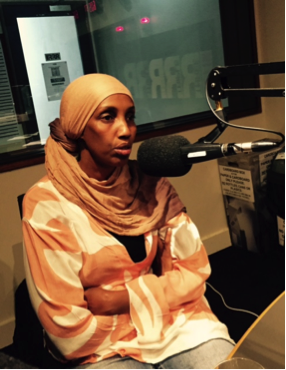 Mariam arrived in Brighton about 15 years ago from Somalia as a refugee.

Despite the fear of racism and difference, she decided to open up her garden and let the community in, it was her way to build community & acceptance. With the stories that can be shared & the people that can be joined together through the garden, Mariam affirms “our diversity is what makes us, us, it is what makes us unique.”

Mariam has since written a book and started an organisation called Resilient Aspiring Women, she has also won an award from the Universal Peace Federation.

Mariam came into the studio today to share her incredible story and how she encourages diversity and empowerment of women through her work & garden.