With the “age of entitlement” declared over, Right Now Radio looks into how the budget balances this view with government’s responsibility to protect the right to social security and equality. Marie Coleman from NFAW & Justin Mohammed from NACCHO help unpack the budget from a human rights perspective. The team also speak to Emily Howie on Australia’s complicity in US drone strike assassinations.

For more than 30 years, the government has included a womens budget statement in it’s budget papers. In 2014, this did not happen, so the community was left to conduct their own budget analysis. The NFAW’s “Women’s Budget Analysis,” contends women are disproportionately disadvantaged. Changes to housing affordability, increased childcare costs, lower income benefit changes, indexation & the proposed increased pension age are all factors in the budget which disproportionately affect women.

Marie Coleman says, “If we look at all those cuts against women, particularly low income women, and then say, but we can afford 5 billion a year to massively increase the level of payment for women who are taking paid parental leave…It really worries me as an equity issue.” 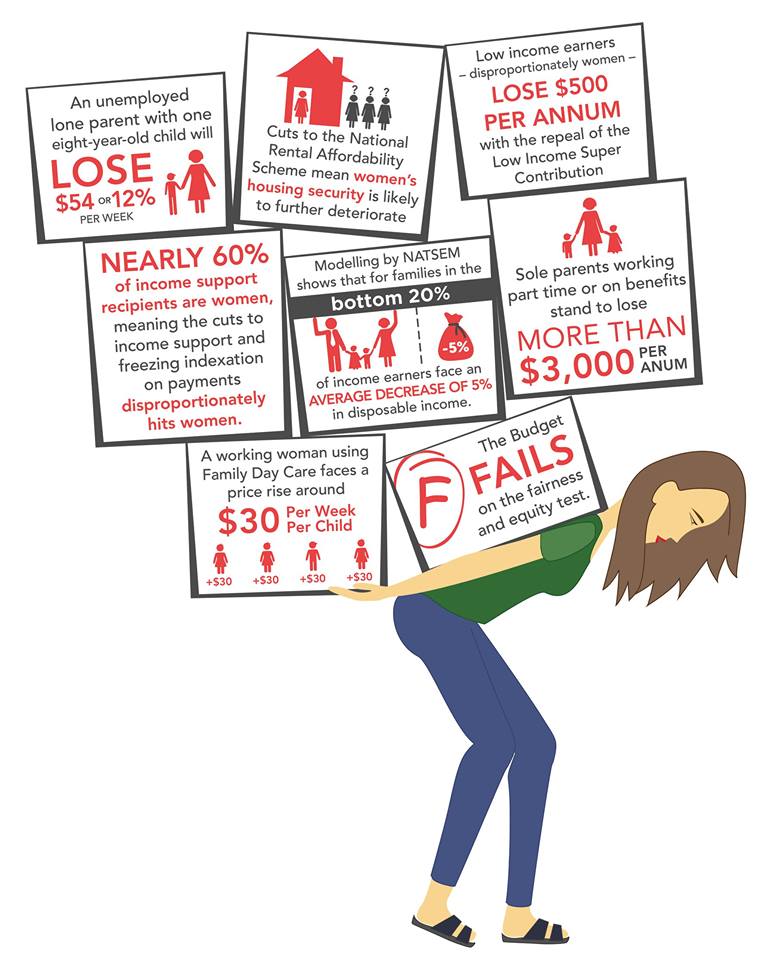 The analysis draws attention to inconsistencies in the government’s budget policy surrounding support for women in the workforce. In particular the prioritizing of the paid parental leave scheme over the support of childcare costs, single parents & women on low incomes. Coleman says, “If what you where trying to do was increase productivity by increasing female workforce participation, you would put your dollars into making childcare more available, more flexible, more affordable.” Paid parental leave is not the significant influence, the availability of affordable childcare is.

Justin Mohamed from NACCHO explains how the budget will impact efforts to improve indigenous health. Australia’s indigenous population face higher rates of chronic disease & have shorter life expectancies than the rest of the Australian population.

Efforts to increase doctor visitations, a major strategy adopted to improve indigenous health will be directly impacted by the introduction of the $7 co-payment. Justin explains that the $7 co-payment scheme is “going to have a severe impact on the
most vulnerable, the nation of people that
have the worst health conditions.”

Is Australia complicit in US drone strike killings? Emily Howie speaks to Right Now Radio, “Australia has the right to know this very basic fact.” Howie urges the government to come clean in it’s involvement with the US’s drone strike program. Questions to the government concerning allegations that Pine Gap’s facility is being used to locate drone targets has been met with deafening silence. The Australian government is yet to provide any information into if or why Australia plays a role in the US’s assassination program. Thousands of civilian lives, including 2 Australians have been claimed by US drone strikes outside of declared war zones.

Ev, Ben & Rach chat about human rights news & what events to keep an eye out for in June. Find out more about this months online issue, Human Rights & History in the Right Now Wrap.

Want to know more about something you heard in the podcast? Follow the links:

To subscribe to the podcast, paste this link into your Itunes or Podcast App browser.