On a hot night last December, my friends and I visited a popular frozen yogurt joint in inner-city Melbourne.

The store is another example of high-end interior design and architecture well-known to Melburnians. A large neon sign flickers from the wall in multiple colours, spouting the kind of pop-poetry that gets people in the mood to eat yoghurt.

Each of us collected our frozen yoghurt in a small cup made from a paper-plastic hybrid. Printed on the side of each cup were the words, “Please dispose of this correctly”. Something really bugged me about this statement.

At first glance the message sounds “environmentally friendly” but in reality it only pays lip-service to encouraging proper rubbish disposal. The real problem is this: by placing these five words on a cup, the store removes their responsibility for the rubbish and places it into the hands of the consumer.

Surely businesses should be required to take more responsibility than this. It’s not uncommon to see similar cups discarded on the streets near other yoghurt or ice-cream stores. Asking consumers to dispose of rubbish correctly is one thing, making sure they do it is another.

Staring into my freshly poured yoghurt, I felt incredibly frustrated. I didn’t want to support a business that contributes to an ever expanding amount of landfill. While this yoghurt store might not be around in 20 years’ time, it’s very likely their waste will. 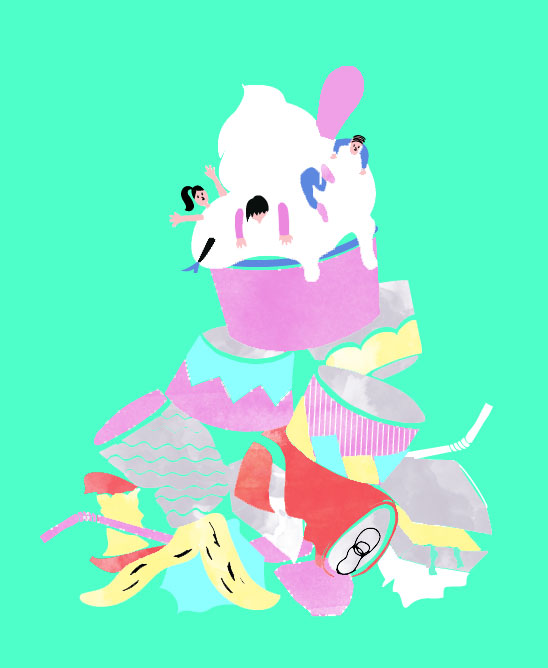 According to environmentalist Tim Silverwood, when a paper cup lined with plastic breaks down we are left with a little plastic sack. While the paper is highly recyclable, the plastic lining isn’t. Silverwood notes that these cups don’t always end up in landfill either, they also end up in our waterways as an environmental hazard.

According to the National Waste Report, 21.5 per cent of commercial and industrial waste is food – that’s equivalent to 1.388 million tonnes every year. With so much food and packaging entering the waste stream year after year, food companies need to step up and be leaders to stop waste from ending its life in landfill, or as Silverwood notes, in our waterways.

Joost Bakker, a designer and architect from Melbourne, shares this idea. In 2012 he opened a zero waste cafe in the Melbourne CBD named Brothl. In six months it saved close to 2.6 tonnes of waste from landfill.

Joost told the New York Times, “The hospitality industry is shockingly wasteful and I wanted to show that it could be done differently.”

But in February 2015, after a dispute with the local council about their composting machine, Brothl closed its doors. Melbourne wasn’t quite ready for a sustainable restaurant with a zero waste policy. It seemed that although the company wanted to take a position of leadership, the broader system wasn’t going to support it.

Local councils, and state and federal governments, need to be supportive of businesses like Joost’s so that sustainability measures can become the norm.

Starting a new relationship with food – and food waste – is going to take more than buying less and cooking more.

Australians discard up to twenty per cent of the food they purchase. That adds up to about 2.675 million tonnes of household waste each year. Most of the time it’s because we either cook too much food, or buy take-away at the last minute, instead of using what’s in the fridge to eat. While businesses, councils and governments should take more responsibility for sustainability, we’re not exempt from doing our bit, as much as we’d like to be.

I recently participated in TOME, a food and design project that explores the concept of the “subnatural” in food and challenges our ideas about the food we’d usually throw away.

The project is inspired by Calvin Schwabe’s 1979 book Unmentionable Cuisine, in which he promotes the use of “unmentionable” ingredients such as offal, insects and animal semen. Schwabe describes his mission as “to help us and our children prepare for the not too distant day when the world’s growing food-population problem presses closer upon us”.

TOME creators, Jonny Kirk and Emily Wong, tell me, “We’re not purporting to be chefs or cooks. The menu of offal is intended as provocation – a catalyst for conversation and discussion about our selective and restrictive eating practices and its consequences and impact, now and into the future.”

For dinner, I was served a soup made with weeds from the garden, an ox tongue, a lamb’s heart and chocolate pudding soaked in blood. The very idea of eating these offcuts made me nervous, and yet the reality was exhilarating.

Francis Bacon, the 16th century philosopher, argued that all nature exists only for us to use. He said science would make nature a slave to man in a way that does “not merely exert gentle guidance over nature’s course but her foundations”. We’ve come a long way from Bacon’s era. But sometimes you wouldn’t be able to tell.

The effects of environmental neglect have become a fact of life and Australia is feeling the effects of climate change. We need to think harder about what we eat, instead of rushing to get a takeaway coffee or purchasing frozen yogurt in disposable cups.

But maintaining the environment shouldn’t only be in the hands of concerned individuals. Companies need to take more leadership over waste disposal. Councils should support companies finding innovative ways to reduce and dispose of waste. Consumers should reimagine their relationship with food.

We need to put the environment before the bottom line.

Shares
Comments Off on Who’s going to take responsibility for all this waste?

This article has been funded by the Australian Government through the Australia Council, its arts funding and advisory body.