Australia’s Operation Sovereign Borders fiercely demarcates the coastline of Australia as a closed border to any outsiders – boasted loudly and clearly through “NO WAY YOU WILL MAKE AUSTRALIA HOME” campaign posters. Such hostility unashamedly communicates the limits of the Australian Government’s care for those seeking refuge.

What is most puzzling about such vehement exclusion is that Australia is a nation created by colonisers who have perpetually asserted that they have a privileged right to exclusively claim it as their own. Borders are designed and constructed by a privileged few to exclude and disadvantage many. Through the enactment of borders, they define people, place and activity.

By walking the restricted and declared zones of Brisbane during G20 and placing paper boats along these borders, a plea for Australia’s abhorrent treatment of asylum seekers to cease was made perpetually visible throughout the G20 summit. The relationality of walking and the poetic symbolism of the fragility of the paper boat provoked many to respond and support the plea to international delegates and media.

Art can define complex ideas and relationships between very different agents, and can also articulate creative responses to common concerns. The Walking Borders project responds to those concerns about human rights shared by our community, but also explores and critically examines dominant contemporary views that reinforce exclusion, with the purpose of contesting them in creative ways and subverting processes of exclusion.

Some of those core exclusionary ideas are articulated in clear-cut, powerful images in the Coalition Operation Sovereign Borders Policy document brief, published in July 2013 and developed in governmental communication spread across the media through images and narratives.

The image of the boat breaking down a border, like a tiny virus or parasite that enters a healthy body to prey on it, is a powerful one, and one that has taken a hold in the public imagination. The image of the sea itself, surrounding a big insular country such as Australia, also explains some of the confrontational rhetoric of the Sovereign Borders Policy, and is one with symbolic potential: if uncontrolled, the sea can rise and engulf the shores, flood our existence and wash away our little haven.

Walking Borders is a creative way of reinterpreting borders not as a tool for oppression and segregation, but rather as a way of drawing common lines that define what communities decide to do together, and in what direction.

In other words, instead of thinking of the boat as a foreign point that cuts through the border, we could see a line of boats as a community of people driven by a common goal, and prepared to walk that way together.

Instead of breaking the borders, the boats can define our borders, but we need to define those borders with an open mind: they are the common lines that we as a community want to use with a positive outlook.

Where do we stand up, and where do we stop? We stand up protecting human rights, protecting the vulnerable, the weak, and those persecuted by war and famine, and empowering them to do meaningful work and help others through it.

“The boats were chosen to symbolise a reminder of the fragility of those who
attempt to cross our country’s arbitrary borders seeking asylum.”

For six weeks prior to the G20, supporters of refugee rights and arts activism gathered at parks located near the declared zone borders of Brisbane (as determined under the G20 (Safety and Security) Act 2013) to fold thousands of paper boats. The boats were chosen “to symbolise a reminder of the fragility of those who attempt to cross our country’s arbitrary borders seeking asylum”, explained Scotia.

Thousands of paper boats were folded and gathered in bags to line the declared zone border, as activists walked the border continuously from 13 November to 16 November marking the duration of the G20 summit.

The public gatherings in parks to fold boats were conceptualised to welcome participation of those for whom walking activism was not possible, be it for mobility reasons, personal choice or fear of police intervention. The boat-folding gatherings brought together people of all age groups, interests and professions wanting to do something to support the humane treatment of refugees. They provided space for a rich exchange of dialogue pertaining to human rights.

From 1 to 12 November, the restricted areas surrounding hotels and sites for the G20 Summit (where guests resided and met) were surrounded by lines of paper boats. Each boat was labelled Walking Borders and weighted with a handful of gravel. The gravel grounded the boats at the borders—a farcical play on Tony Abbott’s declaration that he has “stopped the boats”. 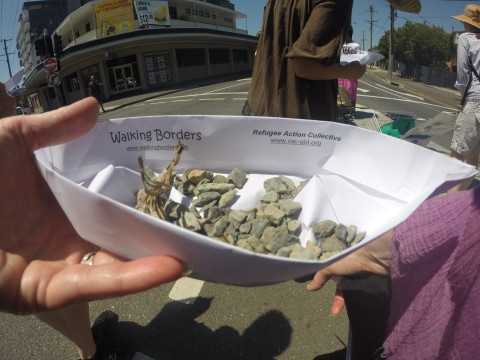 From 13 to 16 November, activists walked the declared area border (approximately 30 kilometres in circumference), lining it with pebble-weighted paper boats along footpaths. Scotia walked 96 hours continuously and many companions joined her at various intervals throughout the walking protest.

The walking of this arbitrary border designated as a declared security area under the G20 (Safety and Security) Act 2013 responded to the removal of democratic access to public space, while symbolically mirroring a not-uncommon refugee experience of fleeing war and conflict by walking long distances across national borders. The persistent visibility of Walking Borders sparked widespread discussion and a declaration of disgust at Australia’s inhumane treatment of asylum seekers.

On 15 November, about 100 Walking Borders supporters gathered at Musgrave Park to sing, dance and launch large paper boats into the Brisbane River. While most moved to the river’s edge at South Bank to sing Catherine Mundy and Jay Turner’s “Refugee – Have Mercy” and perform the actions choreographed by Angela Christine Jasmine, a group of ten, which included three families, local artists and a local politician, strode across the walk bridge to launch a thousand boats into the Brisbane river.

The imagery of the boats as they flowed off the jetty into the river and floated upstream, accompanied by the evocative plea of more than a hundred voices singing:

spoke to many who so happened to be in the vicinity at the time.

One man (a refugee himself) who was swimming in the adjacent pool leapt out and joined the choir. And the image of the thousand boats was captured on television news and screened live to air ahead of Barack Obama’s motorcade on his way to deliver his speech at the University of Queensland.

Through arts activism, Walking Borders brought to the fore the inequities of spatial politics when borders are enforced. The provocation of physically enduring the walking of borders enabled relational, corporeal and sensory experiences that spoke to the plea for refugee and asylum seeker rights, whilst cultivating possibilities of civic engagement across diverse sectors of society with deep care and respect for one another.

Dr Louise Phillips is a human rights activist and lecturer in the School of Education at The University of Queensland, who researches walking as arts practice and civic engagement.

Dr Carles Gutierrez-Sanfeliu is a Lecturer in Spanish in the School of Languages and Comparative Cultural Studies at The University of Queensland.