The list is a made-in-Melaka Malacca-Portuguese specialty. At the bottom of his card are his contact details and home address. Theseira’s home in Ujong Pasir is now the last bastion of the Portuguese Settlement in Melaka since the forced relocation of the community from their historical settlements of Tranquerah, Kubu, Bunga Raya and Bandar Hilir to support the development of large-scale projects.

Melaka is a one-and-a-half-hour drive from Malaysia’s capital Kuala Lumpur and the birthplace of Malaysia’s nationhood. Melaka and another Malaysian city, George Town in Penang, are listed as UNESCO World Heritage sites. Traffic in the centre of town is a one-way affair and it’s easy to get caught in a bottleneck during peak hour, fighting off other cars, motorcycles and Melaka’s infamous pedicab or becak drivers.

On the slow drive out of the town centre towards the highway to Ujong Pasir, Theseira mentions the names of places where land has been reclaimed, and points them out as he drives. “The first lorry road that dumped sand into the sea was in 1974. That was at Wisdom Drive [located at Bandar Hilir]. Then in ’76 the reclamation started at Tranquerah and the other part of Bandar Hilir.”

According to Theseira, the reclamation of land was a joint venture between the Melaka state government and a private developer. Affected residents were resettled in housing estates located three to five kilometres away in Ujung Pasir, Sri Duyung and Telok Mas.

“[The reclamation] stopped in 1984 temporarily because we fishermen protested as it was affecting us terribly. Finally they sat down in a meeting and said, ‘Don’t worry, we’ll provide you with a canal.’ So, I said, OK lah, being fishermen, OK lah not to be an obstruction to the so-called development, OK, if we can still survive and we can go fishing, OK.”

Unfortunately, the canal promised to the fishermen turned out to be a monsoon drain, and at low tide would hold only eight centimetres of water.

The Portuguese colonised Melaka in 1511 until the Dutch defeated them in 1641. In 1933, the Portuguese Settlement was established off the Strait of Melaka by two Catholic priests, Father Alvaro Manuel Coroado and Father Jules Pierre Francois. The 11 hectares of coastal land supported an impoverished community that consisted mainly of fishermen.

Over five hundred years, the Malacca-Portuguese community developed a unique heritage, resulting in a language called Papia Kristang, a Malaccan-Portuguese creole. The largest numbers of speakers are located among the Portuguese Settlement’s population of about 1200 residents. The language is also classified as a severely endangered language in the UNESCO Atlas of the World’s Languages in Danger.

When we arrive in Ujong Pasir, Martin Theseira walks me to the coast, stopping occasionally to greet or shake the hand of a local. The seafront view is like a postcard, and a property developer’s dream. From where we stand, looming up high against the skyline is Silverscape Luxury Residences, a block of 731 luxury apartments above a shopping mall that is part of the Hatten City Project. When completed the project will consist of residential areas, retail outlets, hotels, office spaces and a resort.

However, where we stand, there is the stench of rotten fish.

“It was not like this before. The water was alive, it was moving with the currents”.

In 2014, Malaysia’s Prime Minister Najib Razak launched Melaka Gateway, a 40 billion ringgit ($A12.5 billion) development project that involves the creation of 246 hectares over three man-made islands off the Strait of Melaka. In his launch speech, Prime Minister Najib states that the plans are for Melaka Gateway to be the “largest marina in Asia”. Upon completion in 2025, Melaka Gateway will include luxury apartments, villas with private jetties, hotels, a first-class monorail and entertainment venues.

The onset of another ambitious development project encroaching on the Portuguese Settlement, despite the Hatten City Project not being completed, is another blow to the community. According to Theseira, there are 80 full-time fishermen in the area. On top of that there are part-time fishermen who would go out to sea to supplement their income. But since the surrounding developments and land reclamation projects, the fishermen have had to work longer hours just to earn 50 or 60 ringgit ($16-$18) a day, where previously they could earn approximately 300 ringgit ($94) a day.

In January 2015, a group of 80 fishermen, staged a protest carrying mock coffins to demonstrate the devastation on their livelihood. Due to the protest, the project was put on hold for a short period of time. However, the protest resulted in cuts to some of the protesters’ diesel subsidies and living allowance. When Theseira introduced me to other Portuguese Settlement residents, no one wanted to provide a name, be recorded, or   identified by name in this article. The fear of repercussions from speaking out was very real. 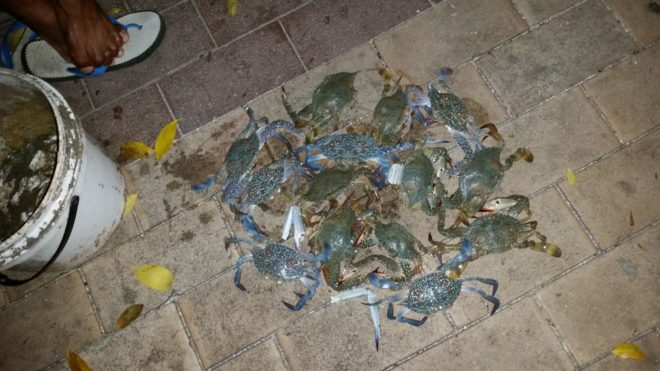 A fisherman displays his catch of crabs after a day’s fishing.

However, all the fishermen Theseira knows have contrary experiences. As dusk settles, a fisherman pulls in. Theseira greets him, introduces me, and asks him to report his day’s catch.

A whole day’s work had yielded fewer than 20 small crabs. According to the fisherman, and acknowledged by Martin and other residents, not only were the catches smaller, but the marine animals themselves were also shrinking and were now two-thirds the size they were a decade or so ago.

In June this year, Theseira together with Portuguese Settlement community representatives including Michael Singho, president of the Malacca Portuguese-Eurasian Association (MPEA), finally had a meeting with State Government representatives and KAJ Development Sdn Bhd (KAJD), the master developer of Melaka Gateway.  While they were given the opportunity to highlight their concerns, they did not expect the signing of a memorandum of agreement (MoA) in September between KAJD and a Chinese property developer, Powerchina International, for a 30 billion ringgit ($9.4 billion) joint investment.  Now not only will the project include three reclaimed islands, there will also be a fourth island designated to be a terminal for containers, shipbuilding and repair facilities, including a projected maritime industrial park.

For Theseira, his exasperation arises from the lack of consultation, and the fact there had not been any environmental or social assessments about the impact of the development on the 500-year-old Portuguese-Malaccan community.

“The most important is the Social Impact Assessment (SIA) for the people: how is this community going to sustain itself for the next 500 years, in terms of its language and in terms of its cultural heritage? You cannot just leave us like this, we will just disappear,” cautions Theseira.

Before his pickle-making business, Theseira worked as a fisherman for 20 years. However, he gave up fishing because it was too difficult – his life was often in danger when he had to go further out to sea just to earn a day’s living. Furthermore, at Bandar Hilir and land reclamation developments, boats were often left at the sea’s edge exposed to the vagaries of the elements as well as to human thievery. His boat’s engine was stolen three or four times.

“Luckily I love cooking, I went into pickle making. So, I live on making pickles, that’s my livelihood now. For me I thank God because I’m so-called versatile. If I want to survive I can even cook in a restaurant, I can even earn a living as a singer if I wanted to. I give my talent to God, I am still serving the church. I teach catechism.

“For me when the Portuguese came here they came for the 3Gs – for God, for gold and for glory. I have the three Cs before me. First it’s my church, my community and my country. That is my driving force.

The Save Portuguese Community Action Committee has an ongoing petition to highlight why the Portuguese Settlement in Melaka needs to be protected and preserved via Change.org.

Lian Low is a writer, editor and spoken word artist.