Whenever a discussion occurs regarding Australia’s refugee policies, there’s a response I repeatedly hear in some circles of the general public: “We should look after our own first”. It’s argued that because there are other humanitarian issues that need to be addressed in Australia – such as those facing the Indigenous population and the high rate of homelessness – we are unable to help refugees. A more extreme example of this was observed last year when former Prime Minister Tony Abbott criticised Europe’s high refugee intake expressing that, “right now, this wholesome instinct [to ‘love your neighbour as you love yourself’] is leading much of Europe into catastrophic error.”

Such an attitude appears to emerge from two main sources. One, is prejudice and paranoia. As outsiders, refugees are perceived by some to be threatening on the basis of their difference and thus, undeserving of assistance. The other, however, is an expression – albeit a misinformed one – of pragmatism, rather than a desire to condemn. With such large-scale humanitarian crises worldwide, and the media bringing them to the forefront of our attention, it’s natural to feel overwhelmed.

At this point, continuing to empathise continuously and unconditionally feels impossible. Hence the other option, which many take, is to start caring less: to limit our compassion. From this, the mindset can emerge that domestic lives in Australia should be inherently prioritised over refugees’.

It seems logical to hold on to the idea that we don’t have the capacity to support everyone who is in need due to resource scarcity, and hence must limit our compassion. But there are several flaws with this idea, particularly when used in Australia to argue against the humanitarian aid of refugees.

1. The idea that we have to choose between helping “our own” and helping refugees is a false dichotomy

While the media may use exaggerated rhetoric to describe refugees as “swarming to” or “flooding” Australia, the reality is that refugees make up a minor proportion of Australia’s population and its migrant intake. In 2014, refugees made up 8 per cent of permanent immigration, and 3.6 per cent of the total population growth. This only amounts to 0.43 per cent of the total number of refugees recognised or resettled globally. It is illogical to suggest that the assistance of refugees is a threat to domestic humanitarian assistance to the point where we must choose only the latter.

Australia is an advanced economy with far greater capacity for resettlement than the developing countries that currently host 86 per cent of the world’s refugees. Australia is also signatory to the Refugee Convention (as well as several other treaties, relating to the human rights of refugees), which states that Australia is forbidden from punishing refugees for entering a country without permission, or sending refugees back to places where they may be persecuted. It is unreasonable to dismiss these legal and moral obligations to refugees’ rights on the basis of domestic humanitarian support when the two differ in scale and are not mutually exclusive.

2. The Australian government’s current refugee policies are costing us more.

The emphasis Australia currently places on refugee detention, especially offshore detention, has resulted in substantial economic and human costs. Detaining one person in offshore detention costs $400,000 a year: ten times more than if they were living in community detention. Evidently, this is not simply driven by resource scarcity factors. It appears that a lack of compassion on the part of the policy makers is also a motivating factor.

The commitment to secrecy of Australia’s border protection policies has also affected other areas of society. For example, under the Border Force Act 2015, workers risk up to two years’ imprisonment if they reveal information to outsiders on conditions in detention. Through this, the focus has shifted to prosecuting journalists and preventing the leakage of information, rather than addressing humanitarian issues. Not only do these policies hinder actual assistance to any party, they also have far-reaching implications for professionals and the Australian public, ranging from freedom of speech to freedom of information. 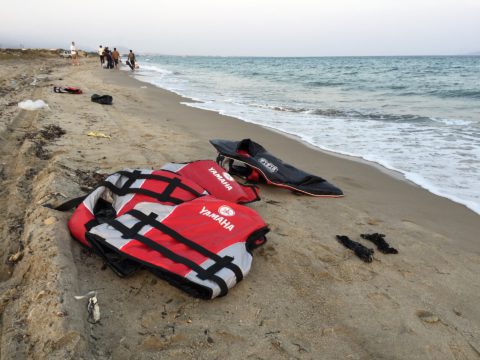 Life jackets for refugees on the coast in Greece.

3. Greater compassion is a bridge towards humanitarian justice, not away from it

While it’s true that Australia’s refugee intake could be higher based on current statistics, this is only part of the worldwide forced migration issue. By limiting its compassion for refugees, the Australian Government has made choices that reflect a refusal to consider alternatives, rather than working towards addressing the issue holistically. Examples include Australia refusing to settle refugees in New Zealand, the policy of turning back the boats, and resettling small numbers of refugees at great expense in developing countries such as Cambodia.

All of these choices were made due to an emphasis on deterrence – an illogical motivation because no amount of deterrence in Australia will end the conflicts occurring worldwide or extinguish the reasons refugees are forced to leave their countries.

What we need is for the Australian government to empathise, understand and holistically address the root causes of this issue. Rather than turning back boats and implementing offshore detention centres with conditions akin to torture, Australia should be working to enable accessibility to safe routes for refugees to seek asylum.

Rather than punishing asylum seekers who have often been tricked by people smugglers, or making illegal payments to people smugglers, Australia should place refugees’ safety first and prosecute the actual traffickers.

Rather than being paranoid about the arrival of asylum seekers and using legislation and the media to spread and cover up lies, Australia should emphasise to the general public that seeking asylum is a human right, that refugees have left their countries due to well-founded fears of war and persecution, and that they have much to contribute to Australia after joining our society.

It is greater empathy, which leads to holistic understanding, that will enable us to work towards sustainable solutions that support people in all areas of need, not the narrow argument that “we should look after our own first”. A belief that every life is of equal worth is what underlies all human rights principles. Humanitarian justice cannot be achieved if this is forgotten.

Shares
Comments Off on The problems with limiting compassion for refugees

Wendy Chen is a writer and student from New South Wales with a particular interest in fiction, review writing, and advocacy.