By Claire Varley. This piece is part of our September focus on Women’s Rights. See all of this month’s articles here.

For almost two years I lived in a small village on a remote island in the middle of the Pacific. Here I worked with some of the most inspiring women in the world.

Women like the Honourable Rhoda Sikilabu – the first female Deputy Premier in the Solomon Islands – who is one of the only women to ever be appointed to her district’s House of Chiefs. And Loretta Soaki, the hard-working young Women’s Desk Officer who is the sole government employee responsible for women’s development for the entire Isabel Province.

These women work tirelessly with limited resources and little support. The Ministry of Community Affairs – their office in the tiny provincial capital Buala – suggests grandeur far surpassing the fact that it is a pokey, falling down building with missing floorboards, five staff and one shared computer that is riddled with trojans and only fires up intermittently when the diesel generator that powers the ramshackle government buildings has enough fuel. Isabel Province is a long, rugged island of 30,000 people, with a single hospital that takes many people more than a day to reach. Child birth claims the lives of far too many women, infants and sometimes both. Family violence is the norm. This is the reality of rural life in the Solomon Islands. And, in a country where 80 per cent of the population live in rural areas, it is the rural people who most want development.

As part of my work I supported a small alliance of government, health, police and church workers to form an integrated response to the almost endemic rate of family violence – “The Isabel United to Stop Family Violence Team”. The team worked long hours outside of their normal work days, took on additional work and received no remuneration for all their extra commitment. The group consisted almost exclusively of women, some of whom were simultaneously educating others about family violence whilst experiencing it at home. I have never seen a group of women more passionate about achieving change. 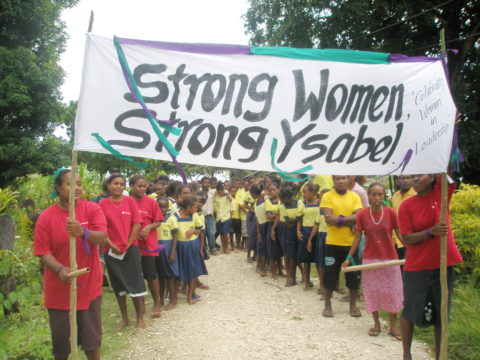 Australian Prime Minister Julia Gillard used the recent Pacific Islands Forum to announce a $320 million aid initiative called “Pacific Women Sharing Pacific Development.” Delivered over ten years, this fund will expand women’s leadership and economic and social opportunities, provide support for practical change at national and local levels, and partner with government and civil society groups. In her speech Prime Minister Gillard said that not only is gender equality “the right thing to do; it’s also the clever thing to do” because by all accounts we know that when you empower women, the whole community benefits.

To put this into context, the Pacific has the lowest representation of women parliamentarians in the world (five per cent compared to a global average of 18 per cent). In the Solomons there is currently only one female national Member of Parliament.

The Pacific also has one of the highest rates of gender-based violence in the world with as many as 69 per cent of women experiencing it. The Solomon Islands Family Health and Safety Survey found that nearly two in three Solomon women had experienced intimate partner violence.

Australia provides half of all global overseas development aid to the Pacific. This amount makes up 25 per cent of Australia’s total overseas aid budget (the Pacific is set to receive 1.2 billion in the 2012-13 cycle). AusAID considers gender a cross-cutting theme across all sectors and the recent Gillard initiative is an impressive commitment, particularly as the ten-year lifespan of the initiative bucks the trend of the short-term development project cycle. But some development workers have met the announcement with measured caution.

Kate Higgins is the Pacific Program Manager for Anglican Overseas Aid (AOA, formerly Anglicord). She has been working in the Pacific for the past five years and currently oversees all development programs in Vanuatu and the Solomon Islands. Kate is impressed by the Gillard initiative, especially its long-term outlook and its commitment to women. However she is apprehensive about the flow on effect to civil society and grassroots organisations that often see little trickle down from such large-scale funding initiatives. Her major concern is that when rural and grassroots women’s organisations get overlooked, development projects are less likely to achieve their goals. One of the chief reasons behind this is a clash of cultural ideas about development. In the Solomon context this often happens around the idea of “human rights”, which many locals see as an imposed Western ideal. 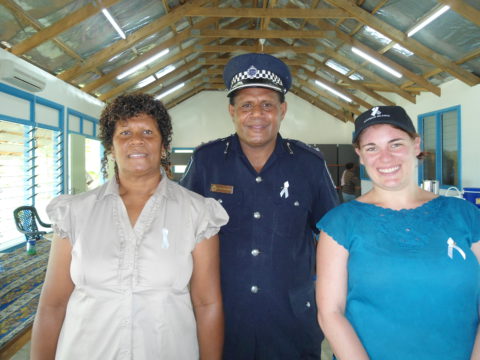 Kate says: “I’ve heard people talk that human rights is against our culture because we have a more tribal set up and it goes ‘against our kastom – it goes against our culture.’ And I think that’s because people are used to seeing it written up on a piece of paper and there hasn’t been a space that’s allowed people to think about this in broader terms. Or how individual rights or human rights could be applicable in a more communal environment.”

Kate finds that as an outsider working to support change there are real tensions between ideals and practice. “One is this absolute fundamental universal ideal around equality of women and striving towards that, and on the other hand you’re … trying to work in a way that you know will be effective and that will spend aid money effectively.”

And when it comes to development, all the money in the world means nothing if it is not being used effectively.

Edith Mary Koete (OBE) is currently serving her second term as President of the Mothers Union (MU), the women’s arm of the Church of Melanesia. With over 16,000 members it is the largest women’s organisation in the Solomon Islands. The MU have extensive membership across the country and their volunteers are one of the driving forces behind grassroots community development in rural Solomon Islands.

Edith is excited by the prospect of targeted gender funding which will combat what she describes as a “male dominated society where women are being looked down upon or seen as second place in leadership responsibilities or decision-making.” She agrees with Kate that effectiveness and sustainability rely on adequately engaging with locals on a real level.

“Talking about rights in Solomon Islands is still not clear and still confusing to people,” she says. Edith gives the example of the fact that despite Solomon Islands being home to a handful of matrilineal tribes where rights of land ownership rest with women, this is not the case in practice where men make the majority of the decisions to do with land use. In her experience, aid effectiveness in rural areas is challenged when people do not understand the intersections of human rights with their traditional values and kastoms. She says rights need to be explained in a way that is relevant to the village life. “So that we don’t think rights is something coming from outside … They are relevant but they need to be clarified using [our] language and giving examples of where they fit in in our context.”

A majority of Solomon Island’s development programs are based in the nation’s capital Honiara, which is worlds away from the rest of the country. Education and training levels are much higher and it is common for city-based development workers to overestimate the resource, finance and skill capacity of the villages. From Edith’s experience, too often well-intentioned aid money fails to reach those who really need it in the villages.

Money, in the forms of grants and funding, is often readily available but accessing this requires submitting detailed proposals and, if successful, sending in reports and acquittals. For many grassroots and civil society organisations, especially those in rural areas where literacy is low, this makes accessing this money almost impossible. “Rural women find it hard, and even organisations like the Mothers Union find it hard, to get the proposal to get the money,” Edith says, pointing out that they have missed out on lots of funding opportunities for this reason.

Fellow Solomon Islander Lanieta Leo agrees. Lanieta grew up in a village in Choiseul province and has worked for a range of international organisations such as Commonwealth Bank and New Zealand High Commission. She is a former General Secretary of the National Council of Women and currently devotes much of her time to volunteering at Honiara’s Christian Care Centre, the only family violence safe house in the Solomons.

Lanieta gets frustrated with the complexity of applying for development partnership proposals. “Who are you aiming to be able to read this Queen’s English and draw up the proposal to get the funding? … I mean, 80 per cent of our women are in the rural setting and are quite illiterate so let’s stop this going on saying we are going to lift up the grassroots women here … because they can’t read and apply.” Lanieta argues that applications would be better written in Pijin, a language more rural women understand.

In Honiara, where there are many more formally educated women, Lanieta believes that more focus needs to go into building better networks between the various NGOs and civil organisations. “There are many Solomon Island women who have the expertise and the skills and the brains … but I think the networking is failing us … People are going to awareness [trainings] on many things. We’re doing human trafficking, we’re doing domestic violence. If we can more or less gather these groups together and uniform them and then make it a bigger group where it becomes stronger and wider … [But] if we continue to put them in little groups … there’s no strength.”

For Lanieta this involves strengthening the national Ministry of Women where misappropriation of money is a big problem. A good use of AusAID money, she argues, is ensuring that bilateral aid money – money given by one government to another – is used for the purpose it is intended. This is a pertinent point because at this stage it looks like a great deal of the Australian Government initiative will go to bilateral agreements. It is no secret that in the Solomons, as well as in other Pacific countries, there is an aid money black hole when it comes to government; often funding goes in and never comes out.

Kate, Edith and Lanieta are hopeful for the potential the Gillard initiative offers to empowering women in the Pacific. All three agree that empowering rural women is central to developing the country and that men need to be involved at all stages of this. The empowerment of women is crucial to the development of the Solomon Islands and there is a great deal of momentum to be harnessed right now. And all three hope to see real dialogue and partnership with rural women. And we can start by having those conversations with the inspiring women who live in the small villages on the remote islands in the middle of the Pacific.

Claire Varley is a writer and community development worker who spent almost two years working in communications for development in rural Solomon Islands.

Shares
Comments Off on The Importance of Women: International development and equality