Dr Melissa Crouch. This article is part of our February 2013 focus on Religion and Human Rights.

In September 2012, Indonesian President Susilo Bambang Yudhoyono (known as “SBY”) made an announcement to the United Nations to urge the international community to adopt an international instrument banning blasphemy and protecting religion. This came as a surprise to many because, throughout his term as president, SBY has failed to take a strong public stance on any issue related to the right to religious freedom. His statement before the UN was rejected and criticised by many advocates in support of freedom of religion and human rights in Indonesia.

SBY’s provocative statement is part of a much larger trend towards the legal regulation of religion in Indonesia. This has been a matter of public contention throughout Indonesia’s history, and has continued into the democratic transition since 1998. This debate is significant because it is taking place in the world’s largest Muslim-majority country, with a population of over 240 million people. The position of Indonesia’s government on religious freedom therefore matters not only because it represents a large portion of the Muslim world, but also because it is the world’s third largest democracy.

In his two terms as president, SBY has remained largely unresponsive to acts of vigilante violence against religious minorities and the increase in regional laws by local authorities to restrict minority groups. Yet since 2004, there has been a significant increase in the number of incidents that have challenged or compromised religious freedom. The government has largely pursued a policy of non-interference in incidents of religious intolerance. Perpetrators of violence against religious communities have rarely been prosecuted. When they have been taken to court, those found guilty have often escaped with light sentences.

While these incidents have occurred in the shadow of the constitutional right to freedom of religion in Indonesia, this right is essentially qualified by many government regulations. Most policies on religious affairs have been issued in the form of Ministerial Regulations and have therefore escaped the need for legislative approval. Other laws have been promulgated at the regional rather than national level. This is despite the fact that the national government retains the power to regulate on matters of “religion”.

There have, however, been heated debates over three key laws, or draft laws, on different aspects of religious freedom that have occurred during SBY’s presidency. These are the Ministerial Regulation on Places of Worship, the Blasphemy Law and the Draft Law on Inter-religious Harmony.

First, there was the introduction of the new Joint Ministerial Regulation on Places of Worship in 2006. This was in response to the sharp increase in the number of churches, as well as Ahmadiyah mosques, that faced intimidation from radical Islamic groups and were forced to close. The regulation established a new body known as the Inter-religious Harmony Forum, which is group of local religious leaders given the responsibility of determining applications for building permits. As Paramadina Institute has concluded, however, this Forum has at times obstructed, rather than facilitated, the resolution of disputes over permits for places of worship. 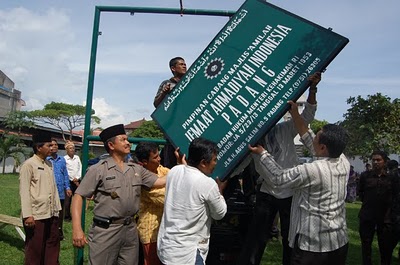 Religious minorities have continued to face difficulties concerning permits for buildings. In 2012, a local government continued to defy the court decision of the Administrative Court in relation to a church that had challenged the legality of a government decision to cancel its permit in Bogor. In 2012, several Christian churches and Buddhist temples in majority-Muslim Aceh were forced to close because they did not have a permit for the building. The regulation has therefore failed to adequately address the disputes that arise over permits for religious buildings.

Second, there have been proposals to revise or repeal the Blasphemy Law. These suggestions were in response to the dramatic increase in the use of the Blasphemy Law to criminalise religious minorities and ban their activities. This has corresponded with a high level of violence by radical Islamic groups against individuals or communities accused of being “deviant”. For example, in 2008, supporters of religious tolerance who demonstrated at the National Monument in Jakarta were attacked in broad daylight by members of radical Islamic groups such as the Islamic Defenders Front. Several days later, in reaction to this incident and based on its powers under the Blasphemy Law, the government issued a Joint Ministerial Decision “warning” the followers of Ahmadiyah.

The affirmation of the Blasphemy Law has meant that attacks against Ahmadiyah, as well as other religious minorities, have continued

The affirmation of the Blasphemy Law has meant that attacks against Ahmadiyah, as well as other religious minorities, have continued since then. In 2011, three Ahmadi men were brutally bashed to death in Cikeusik. As a result, many local governments in Indonesia responded by issuing regulations banning the activities of Ahmadiyah. In 2012, violence against the Shia community in Madura led to the death of one man and displacement of the community. A Shia leader, Tajul Muluk, was also put on trial in the Sampang District Court and found guilty of blasphemy.

Other religious minorities continue to be brought to court, and, in 2012, there was also the first ever trial of an atheist for blasphemy. The accused, Alexander An, was found not guilty of blasphemy but of a similar offence under the Law on Information and Electronic Transactions for inciting public unrest for his comments on Islam via a Facebook page. He was sentenced to a prison term of two and a half years. There have been several attempts to reform the Blasphemy Law, by reformulating the provisions in a revised draft of the Criminal Code, or in a Draft Law on Inter-religious Harmony.

The Draft Law on Inter-religious Harmony is the third key issue, and is linked to long-standing debates on regulating religion in Indonesia. In 2011, these discussions on the possibility of a national Draft Law on Inter-religious Harmony were resurrected again. One of the legislative Commissions proposed a Draft Law that would incorporate many of the Ministry of Religion’s existing policies on places of worship, religious education, burial practices, and religious celebrations.

This proposal was again vigorously debated and rejected by many human rights organisations that instead suggested the need for a law protecting religious freedom. Although this law has not been passed, the legislature did approve Law 7/2012 on Social Conflict, which allows the government at the regional or national level to declare a state of emergency in the event of a religious conflict. This was widely condemned by activists as opening the door for greater involvement of the military in such disputes. This is concerning because of the military’s track record in human rights abuses and conflict.

These three key debates – on regulating places of worship, blasphemy and a law regulating religious affairs generally – remain ongoing. They are in part evidence of the dynamic and robust nature of public debates on religion in democratic Indonesia. On the other hand, it is also a reflection of the failure of the SBY government to deal with religious vigilantism and uphold religious freedom for all of Indonesia’s diverse religions and local beliefs. SBY’s statement to the UN on blasphemy appears to suggest that he is willing to address this issue at the international level at the expense of dealing with the need to protect religious freedom in his own backyard. This will remain one of the biggest challenges that his successor will face when SBY steps down in the upcoming 2014 national elections.

Melissa Crouch is a Postdoctoral Fellow at the Law Faculty, the National University of Singapore. melissacrouch@nus.edu.sg