The images and multimedia included in this article are republished from the South Eastern Centre Against Sexual Assault’s (SECASA’s) art group blog. The art group blog was established as part of SECASA’s of our ‘year of less text’ initiative, with funding from the Victorian Women’s Trust.  The ‘year of less text’ aims to do more with SECASA’s online presence that is not purely text based.

Anne Riggs is an artist at the SECASA art group. Through the art group, Anne uses the creative process to assist victims of assault to express themselves creatively by communicating through art. Each group also has a SECASA counsellor present in case one of the participants needs emotional support.

RN: How was the art group established and how did you get involved?

Anne Riggs: It goes back quite a few years. I started doing my PhD dealing with art and trauma and was looking to understand better the benefits that art could bring to recovery after trauma and sexual abuse. We established two groups as part of my research. The first was a mosaic group, which was followed by a clay group. The clay group was looking at how art could help people acknowledge and work with their grief and loss, and at the same time build up a sense of community, build up relationships with other people. 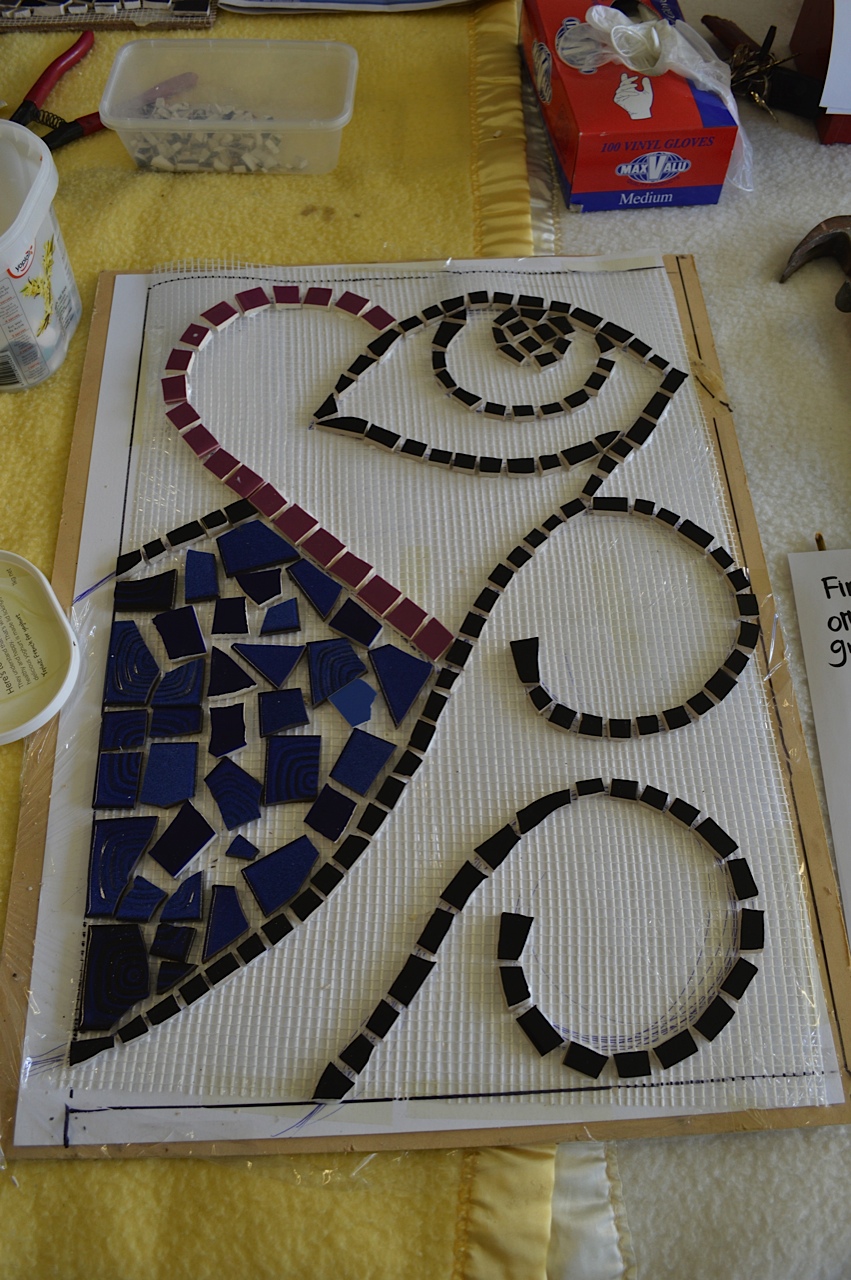 Have the groups evolved?

They tend to run for 15 weeks each. Ideally we do a cycle of mosaics followed by a clay group and the same group of people will go through both. They tend to like doing either so we try to move people through.

We try not to keep people attached to the group because the idea is for them to then participate in community life, not to be attached to SECASA indefinitely. However, some people come back to another group. The thing about sexual trauma is that it has an ongoing effect on people’s lives. Sometimes they will have another dip and they need to come back and be part of the SECASA community again. So we make space for people to do that but generally speaking people just come for a year.

What is different about the way you run the art group?

I don’t think it’s the only one, I know other people who run other [similar] groups. I think the crucial thing about this way of working is that it’s about arts practice. I’m a visual artist and my training is in arts practice – I’m a painter. So the idea is to bring the elements of arts practice to the group – the skills and techniques, how artists think and express themselves and using materials to express. We look at artworks, artists and design so that women develop a visual language, a mature way of expressing themselves through art.

That’s very different to an art therapy group where the focus is very much on therapy and very little on the arts practice. The SECASA art group is always coming from an arts practice basis, the thinking is about developing techniques in a particular medium. Those skills are ongoing in as much as they create skills and people can go on creating art once they leave the group.

Mosaic making teaches transferable and practical skills so participants can learn to apply this skills using tools around the house. That gives people confidence.

Mosaics also give them an appreciation of art and beauty. Not only are they practicing art but they can also go out in the world and look with different eyes, have an interest in different things, and those things all contribute to recovery and participating in community life. 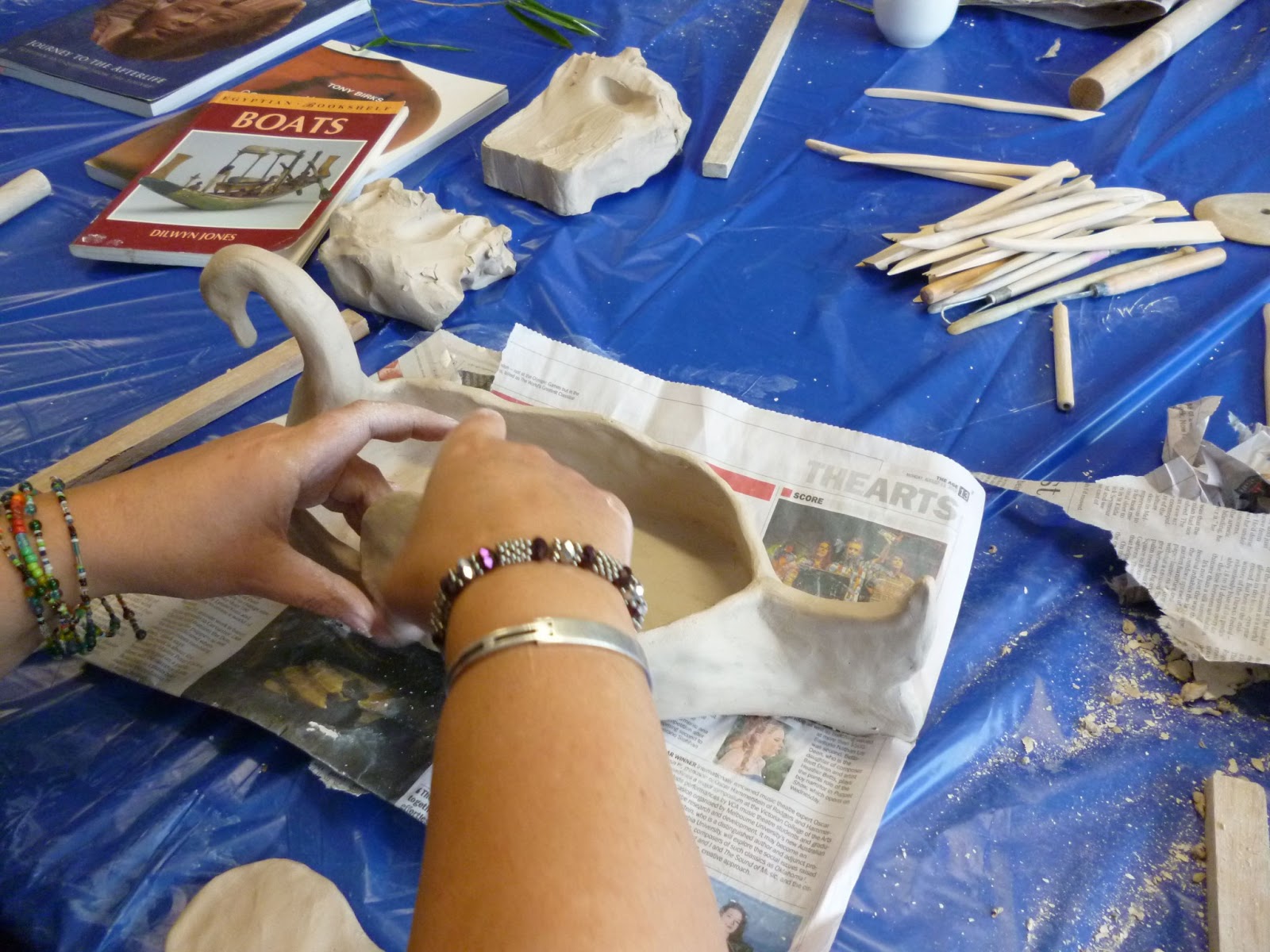 How did you develop the idea to create the art blog?

To tell you truth I can’t remember the exact start, but I always try to put the women’s work out into the public arena as much as I can because that gives them confidence, it gives them a purpose to create the best work that they possibly can. It gives them a forum to be heard about their sexual abuse and their trauma and for a lot of women that’s a way of identifying; of saying this actually did happen to me. We put lots of their photographs up on the SECASA site and we also publish a calendar of their work.

…where they could express what they wanted to express in their own way, without being moderated by other people

I think the blog was more Juliet’s idea [Juliet Summers, Online Project Worker at SECASA]. It was about being able to continue that place where people have a voice. And where they could express what they wanted to express in their own way, without being moderated by other people. It was one of those things that we kind of dreamed about, and all of a sudden we got the money to do it which was great.

What has been the response from participants?

The classes are transformative for most people because they do a lot of things, they provide the space for them to do something that most have always wanted to do – to create, be artistic. Lots of people have that hidden desire; they would like to be more creative. The classes are also transformative because through them participants see that they are not the failures and the hopeless human beings that, through their abusive past, they have been led to believe. They learn they’ve got talent. It really boosts participants’ self esteem and skills and that enables them to say “well if I can do well at this then maybe I can also succeed in other areas of my life” which they do.

Then we put the work out in public spaces – that involves putting it up on the walls at SECASA, in exhibitions and on the blog. One participant even had her mosaic artwork published onto the cover of a book to which I contributed a chapter about the impact of trauma and art of another participant. That kind of thing just catapults people into a world that they’ve never ever imagined for themselves and gives them a little bit of glory and fame. It’s something to be proud of and usually gives a boost to their ego and self esteem. Many participants feel that until now, they have had little in their lives which have made them feel proud of themselves.

Participants seem to love looking at other women’s video blogs but they are still a little bit nervous about doing their own, and about having their face in public. They are interested in the story part of it and the stories of other women but it’s a different step to actually do one themselves.  Showing their face is the difficult part but that is not necessary – we have made a number where we use a voice over with the women’s work, however, I think as they see other women’s video’s a little bit of confidence grows and with that so the interest in participating grows too. I work very collaboratively with each participant when we make a video, so they always have the final say on how it looks. They are never put in the position where their work, voice or images goes on the web without their consent and importantly ensuring each person feels the work reflects them in the way they wish to be presented. 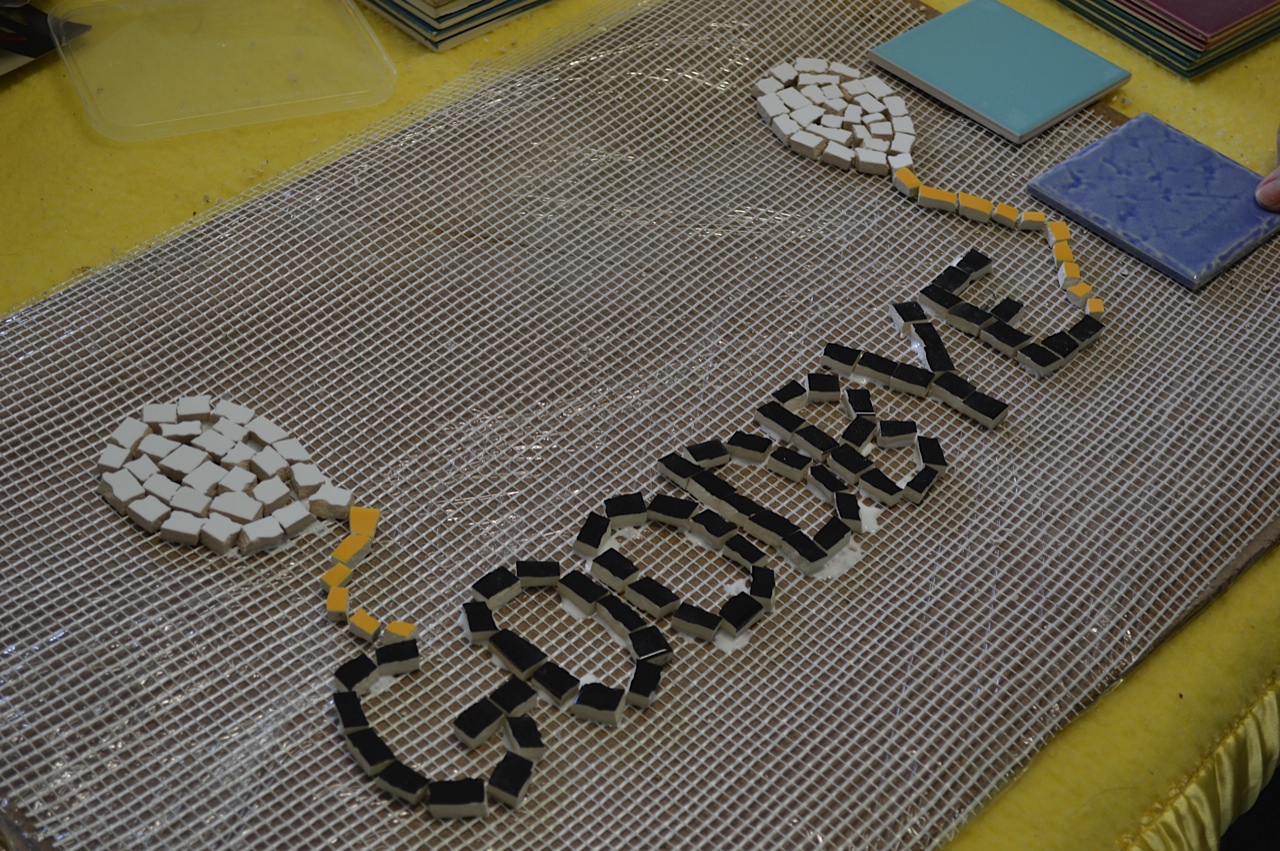 What do you see in the future for the art group?

I feel very optimistic about it; I have worked a lot in art and community and I always had to persuade people about the value of art. And I’ve seen over time, not just through my work but just generally speaking, that people are beginning to see that art has a real place in healing and recovery. I teach a community mental health course where I include art as part of the program and as they create students are beginning to see, their own transformations as well as understand the benefits it offers to others. I anticipate that when they become community mental health workers art is going to be part of their practice as well. The students will be going into all sorts of community settings: mental health, trauma, drug, alcohol and addictions recovery.

The counsellors at SECASA comment they also see the transformations that happen when their clients participate in the art groups. So I feel that art is just going to gain ground in this area.

Handwritten notes from participants – week three of the art group 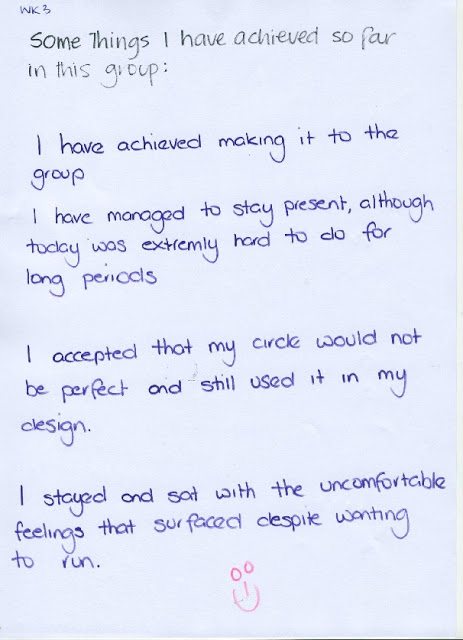 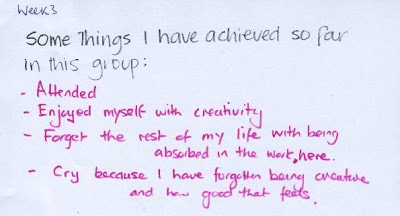 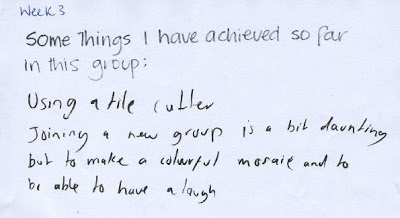