In early May, a fiery group of protestors lined the front of Serco’s headquarters in central Melbourne.

The rally was the latest in a series of protests spearheaded by the Refugee Action Collective (RAC-VIC) to combat the government’s mandatory detention policy. Under this system, refugees arriving by boat are detained indefinitely while their applications for asylum are processed. The chanting protesters ranged from students, middle-aged professionals and pensioners, all united in their opposition to mandatory detention:

“Lock up Serco! Throw away the key! We won’t stop until we free the refugees!”

Reports of Serco’s inadequate treatment of the asylum-seekers under their care have further fuelled the anger of the opposition.

“Lock up Serco! Throw away the key! We won’t stop until we free the refugees!”

Benjamin Solah from RAC-VIC highlights the case of Tamer Al-Ketab, a 33-year-old Palestinian man whose leg was amputated after a year in mandatory detention. Al-Ketab was injured while escaping from Indonesian authorities. On arrival, he was treated for six months at a Darwin hospital before being moved in July 2010 to Maribyrnong Detention Centre. The infection in his leg steadily worsened until it was amputated in January.

One of Mr Al-Ketab’s supporters reports that he suffered immense pain and that Maribyrnong facilities were ill-equipped: “I don’t think they gave him morphine. I just don’t believe people get adequate care in detention.”

Mr Solah, a regular visitor to Victorian refugee centres in Broadmeadows and Maribyrnong, notes that “there is a massive level of despair and desperation amongst the [detainees].”

“The majority of refugees in the centres suffer from depression,” according to Nicole Mousley from RAC-VIC, “two-thirds to three-quarters are on anti-depressants.” Ms Mousley also points to the example of a suicidal Broadmeadows detainee who climbed a tree in protest in March. “A Serco officer taunted him to jump,” she reports.

There have been five suicides in the detention centres since October with Serco facing heightened public scrutiny over their inefficient response.

In May, the ABC reported that detainees at Sydney’s Villawood detention centre were forced to use a cigarette lighter to burn through the rope when 41-year-old Ahmed Al-Akabi tried take his own life. They say that the guards did not know how to respond and did not have a sharp instrument for cutting him down. Al-Akabi was pronounced dead a short time later. The detainees involved had not received any counselling.

Serco released a statement responding to these allegations: “Serco is committed to doing everything we can to prevent those in our care from coming to harm. Our staff take this commitment extremely seriously and work hard to keep those in our care safe and secure.”

In an anonymous interview with Crikey in February, three whistleblower guards exposed Serco’s occupational infringements at the Villawood detention centre. The employees from MSS Security, contracted by Serco for duties that involve “non-client contact”, have highlighted problems with understaffing, incompetence, and poor health and safety standards.

“Serco has problems with absenteeism, so MSS sometimes fills the gaps inside the centre, which we aren’t qualified to do,” said one of the whistleblowers. They claim that MSS is routinely blamed for Serco failures. “During the last protest at Villawood when a refugee climbed onto the roof, Serco didn’t respond for five hours by which time 11 had got onto the roof. Serco just didn’t want to confront the situation, hence inaction for so long.”

Another MSS guard disparages Serco’s lack of adherence to health and safety requirements. “As perimeter guards we have to wait sometimes 20-30 minutes for a toilet break due to how busy our supervisor is and we do not get lunch breaks.”

“During the last protest at Villawood when a refugee climbed onto the roof, Serco didn’t respond for five hours by which time 11 had got onto the roof. Serco just didn’t want to confront the situation, hence inaction for so long.”

MSS did not answer repeated requests for comment. Serco told Crikey that the company “values health and safety and adopts a policy of zero-harm to all of its employees, including subcontractors.” Serco has since replaced MSS with Wilson Security in late February. Serco did not respond to requests for comment on this article, claiming to be contractually prohibited from speaking with members of the press.

Serco’s company policy reads: “Serco recognizes the United Nations Declaration for Human Rights. Respect for human rights is a fundamental part of how we do business and our Governing Principles.”

This lack of transparency and accountability is an issue constantly highlighted by activists. Liz Walsh from RAC-VIC reports that rules of entry fluctuate weekly at each of Serco’s Victorian detention centres. She also reports that anyone who is a friend of RAC-VIC on Facebook will be blacklisted by Serco.

In early May, Serco released a document stating that any “unauthorised” media presence at their detention centres was considered of “critical” threat level. Immigration Minister Chris Bowen argues that this is to ensure refugees’ asylum claims would not be compromised, the ABC reported. Opposition immigration spokesman, Scott Morrison, however, says that this merely demonstrates Serco’s and Labor’s concern for bad headlines.

Evan McHugh of political podcast programme, Left and Correct, decries the privatisation of refugee detention. “Serco itself is a company that’s made to make money,” he says, “They’re going to make money as long as people are locked up in detention centres. So straight away, there’s a conflict of interest. You can’t properly look after someone while watching a bottom line.”

John Menadue from the Centre for Policy Development says that in 2011, “government will spend $702 million in asylum seeker detention and related costs. [This is] about $90,000 for every asylum-seeker that comes to Australia. The abolition of mandatory detention of asylum seekers could save between $150 and $425 million per annum.”

A version of this article has also appeared in Farrago. 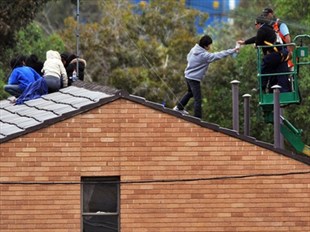