“Ondru” is a Tamil word meaning one, equality or to “become one with”. On its website, the organisation totes itself as a rising movement of arts and literature. Desh Balasubramaniam, the founder and director of Ondru, speaks frankly about how Ondru describes itself. “I had to prove myself,” he says, with a level of self-awareness that comes through often during our interview. While Ondru certainly appears to be a movement of its own, Desh seems to think it need no longer self-consciously portray itself as such – no matter how Ondru describes itself in the future, it seems it has grown to a stage where its work speaks for itself.

I met with Desh to speak about Ondru, and its current project entitled Voiceless Journeys.

Voiceless Journeys is a project that depicts the stories of 101 people who left their countries as a result of conflict or internal problems to come to Australia. Voiceless Journeys is a series of black and white photographic portraits. The portraits are beautiful, stark and moving. Each individual who chose to become involved in the project was asked to express themselves with their hands. The result is, variously, thoughtful and heartrending and joyful. The portraits are intimate – each captured expression is thrown into sharp relief in shades between black and white.

As an organisation, Ondru is apolitical. However, a key part of its manifesto is to challenge society. To that end, I asked Desh how Voiceless Journeys would reach beyond an audience of those already keenly aware of issues surround migration and forced migration – in particular, to an audience larger than the groundswell of Australians who already strongly object to our government’s asylum seeker policies. How would Ondru avoid the pitfall of preaching to the converted?

Desh explained how Voiceless Journeys seeks to engage people in multiple ways. Firstly, the project engages the migrant community. Initially, members of various migrant communities were sceptical of the project. However, when Desh showed community leaders and other migrant organisations the portrait of his father – the first portrait shown on the Voiceless Journeys website – he began to build trust within these disparate community groups, and soon had many people volunteering to participate.

Secondly, the project engages the individuals in the portraits. The project began to have an almost transformative effect on its participants. 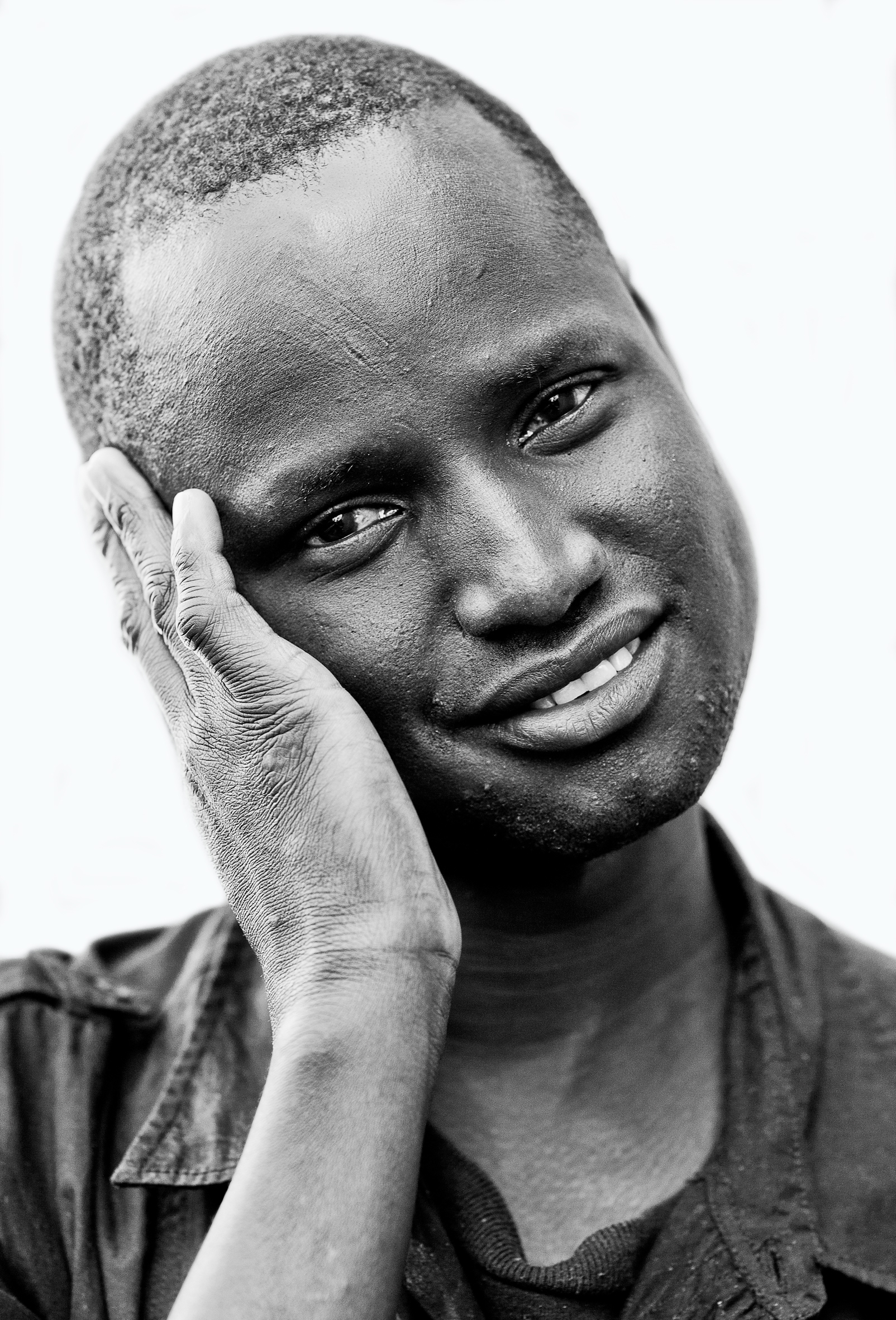 Desh tells a story about an older Afghan woman photographed for the project. When they arrived at her house, they thought they had come to the wrong address. Unlike the housing situations for many migrants who have been forced to come to Australia in difficult circumstances, she lived in a palatial house with a very expensive car parked in the driveway.

When they began speaking with her in her kitchen, her teenage son walked through with rap leaking out of his iPod headphones with a  “Hey, what’s up,” before leaving again. Finally, she began to talk about the Soviet war in Afghanistan and broke down in tears. She gestured to her son and said that he wouldn’t have a clue about what she had been through, because all of her efforts had become concentrated on her children, and on making a new life in Australia.

This is when Desh realised that, while Voiceless Journeys was intended to be a selection of photographic portraits only, the stories of the people photographed needed to be told as well. It was clear that the project needed to have both visual and verbal component.

Thirdly, the project engages the people directly involved in its exhibition. Voiceless Journeys may be commissioned by any organisation. Representatives of these organisations must then be directly involved in exhibiting the work. An exhibition of Voiceless Journeys involves a workshop between the commissioning organisation and Ondru, where the ethos of the project is explored and discussed as part of the process of physically exhibiting the portraits.

Finally, the project engages the broader public through its street exhibitions. The images are projected, or painted or displayed in large murals in public spaces all over Melbourne. The images are arresting. You lock eyes with each individual. For me, the portraits are each tangibly familiar but also indelibly unique – the emotion expressed is relatable, yet I know each individual has experienced conflict or civil unrest unlike anything I’ve ever known. It’s hard to see how anyone could walk by these portraits without absorbing something from them – and I understand why Ondru’s vision is to have these portraits flung tall and wide across the city. Yet I hope that in a world flooded with visual stimulation, it continues to have the impact it deserves.

Voiceless Journeys is also exhibited to smaller groups. For example, all delegates to the Global Ideas Forum in 2014 will be able to view a series of these portraits in closer context and hear from Desh, who will speak about the project. The Global Ideas Forum is about collaboration and development amongst bright and engaged global citizens from different sectors, to turn health and development solutions into action. It is an annual forum, and this year’s theme is “Health in the post-2015 development agenda”.

The relationship between Voiceless Journeys and Global Ideas Forum sends a clear message about the human issues which underlie every broad policy or development project. It is a reminder that broad considerations like justice, or equity or accessibility should be steeped in human reality – lest they become objectives that are too grandiose or aspirational to engage with on an individual, organisational or political level. This relationship provokes us to think that changing our world for the better necessarily involves collaboration between many sectors – which involves abandoning our labels, whether it be ‘artist’ or ‘lawyer’ or ‘engineer’ or ‘teacher’, even if temporarily, to work together.

The subject of labels and of breaking down barriers takes me back to Desh. Like the subjects in Voiceless Journeys, Desh also left his home country as a result of conflict. A Sri Lankan Tamil from the North, he and his family moved to New Zealand as refugees when he was thirteen years old. When I asked him what it was like for him, moving to New Zealand at that age and in those circumstances, he was matter-of-fact.

“I left it behind,” he said, referring to his thirteen-year-old self, suddenly transplanted into a country town in New Zealand. At that time, he said he was more concerned about becoming completely comfortable in English and fitting in at school. He speaks of being the oldest sibling, and it’s clear this was another factor in his adjustment to his new life being the primary focus.

Desh’s description of feeling caught between worlds, and of being unable to fully identify as ‘Tamil’ or ‘Sri Lankan’ or ‘Kiwi’ resonated with me, as it would with any other first generation migrant to Australia as a child or teenager. His experience is example of how, while the trope of the culturally conflicted migrant is very much typical, the way each person resolves (or does not resolve) this conflict is often far from uniform.

Initially, it seemed Desh had a desire to be wholly self-sufficient: “I had a list of five things. I wanted to learn how to build a house, fix a car, learn the law because I thought that would give me a voice, I wanted to understand business and I also wanted to become a doctor so I could make people feel better.” He laughs as he tells me this, batting this list away from him because he thinks it makes him sound insufferable – “Don’t write this down!”, he grins. However, it seems to reflect a man who had a strong desire to be independent – and who was also somewhat undecided as to how.

It’s probably worth noting here that Desh: has experience in building work, can manage many repairs to a car, worked as a lawyer in several large commercial firms and completed a business degree. But while four out of five isn’t bad, Desh has moved far away from his list and the kind of cerebral vagrancy that comes from being part of many worlds; of being and feeling, simultaneous and insufficiently Tamil, Sri Lankan or Kiwi.

For Desh, it would seem that his experiences while travelling were revelatory. When I ask him about how he came to found Ondru, he comes back to his experience as a traveller. He said he worked multiple jobs, slept on the rough at times and often skated by on the kindness of strangers. He has now been back to Sri Lanka twice – once during the civil war, and once since it ended. He speaks about witnessing the effects of violence in Sri Lanka, but also of violence in Alice Springs where he saw a police officer assault an Aboriginal woman.

After settling into Melbourne, Desh shed the beard and traveller garb and went to work in an office, after some time labouring. He started spending time writing poetry, and surrounding himself with artists who challenged his allegiance to the written word alone. He started exploring other forms of expression, and finally founded Ondru, which is a continuation of that exploration.

Desh is modest. He describes himself as having surrounded himself with others who are smart and competent. However, he has the following to say to those who also seek to provoke change in society.Passion is crucial and hard work is essential. You must be resilient and believe in your project. It may not be your day job, and it probably will raise eyebrows and scepticism from the people closest to you. You must surround yourself with people who can guide you. Finally, you must always be reflective. You must continually consider whether your project or idea needs to be refined, abandoned or changed.

I leave my conversation with Desh somewhat reluctantly, as his energy is that happy combination of being captivating and yet vaguely intimidating – with a smile, he forces you to reconsider your place in the world. His current focus is to continue to grow Ondru and develop new and unrelated new project ideas. As he points out, Ondru is not about migration or refugees or diversity – it is about finding the spaces to challenge society and to enable us to connect with many and varied human experiences, whether it be an exploration of internal displacement or autism, the possibilities seem endless. Voiceless Journeys is a remarkable project, but also a precursor to many more.

Sayomi Ariyawansa is a Melbourne lawyer. She has volunteered with the Asylum Seeker Resource Centre, interned in the New York Office of Human Rights First and previously worked for the Victorian Department of Justice. She is currently on the committee for the Global Ideas Forum.

Right Now will have exclusive access to the Global Ideas Forum 2014. Stay tuned for further updates about the Forum in this month’s issue.