This article was first published on the Castan Centre’s blog. You can access the blog here for more great articles on human rights law. A shorter form of this article was also published in The Conversation. You can also read Blink, a short story inspired by the Occupy Melbourne eviction.

I received a text message on Friday morning from a friend at the Occupy Melbourne protest at City Square, saying that the protesters were about to be forcibly evicted. I had previously been down to City Square the previous Saturday as the protesters were setting up, and my impression of the movement was a largely positive one. Sure, the array of banners and pamphlets attested to the diversity of views and politics present. But to say that the movement was incoherent – and it is tempting to do so – is misleading. From what I saw that first Saturday, the Occupiers were united by a belief that an economic system that favours big corporations is damaging to real democracy. The expectation that the Occupiers would be able to articulate concrete solutions or a ten-step plan was somewhat beside the point. I spoke to a few Occupiers in the Square, and for them the whole purpose of the Occupy movement was to create a space in which people could talk about alternatives to an economic system we normally accept as a given. Overall, the Occupiers struck me as friendly and relatively well organised. There were families with young children there, and non-protesters looked on from the surrounding cafés and bars more in curiousity than anxiety.

So when I received my friend’s text on Friday I was keen to get down to the Square just to see what was going on. I’m the new Project Officer at the Castan Centre for Human Rights Law and the Editor-in-chief of Right Now, so I was particularly interested in Occupy Melbourne from a freedom of expression and freedom of assembly point of view. I also knew – or at least thought I knew – that the best way to keep the police accountable in these sorts of situations is to have as many non-involved observers there as possible. Surely, I thought, the larger the crowd watching, the less likely the police would be to use violent tactics. 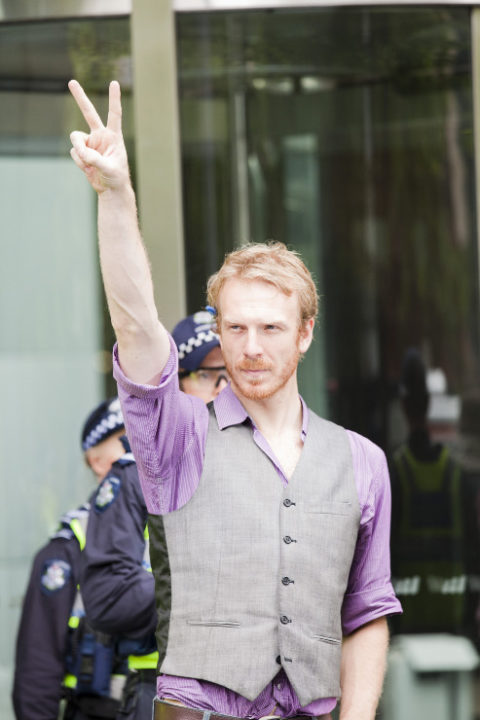 Photo Courtesy of Fred Hugo. A protester out the front of BHP Billiton

With all this in mind, I arrived at the corner of Swanston and Collins Sts around noon. By this time, the majority of protesters had been moved out of the Square and were gathered in the intersection, or lining the fences that had been erected to “kettle” the remaining hard core of Occupiers. As the onlookers pointed every conceivable type of recording device towards the knot of interlinked Occupiers, groups of up to four or five police officers in blue boiler suits picked out a single protester and wrestled them from the group, visibly choking male and female arrestees alike. Making my way around the perimeter I passed a man with a broken nose and bloody face, talking excitedly at an array of television cameras. Near him another man was slumped on the ground, in visible distress as his friend looked for the paramedics.

Generally though, there seemed to be more onlookers than there were active protesters. The mood ebbed between anger and bemusement. One Taiwanese tourist asked me what all the commotion was about, while an elderly man had an involved conversation with a senior police officer about the right to assembly. By the time all the Occupiers had been dragged out of the Square, the people on the street had lost their point of focus. The rain began to fall a little heavier, and despite the appearance of a box of ponchos, it seemed that the crowd was beginning to thin out.

I suddenly found myself within touching distance of a great mass of muscle and sinew with which I could not reason.

It was inexplicably at this point that the police decided to forcibly disperse the crowd. I was standing with a small group of friends some ten to fifteen metres from the frontline that had formed along the southern end of the intersection when the mounted police got involved. They formed a wedge and the leading police officer either lost control of his horse or else drove it into the crowd as people yelled and tried to jump out of the way. From a position of relative distance, I suddenly found myself within touching distance of a great mass of muscle and sinew with which I could not reason. Instead I found myself backing away, frantically pulling at those around me as we tried to avoid being trampled. Just as I got clear of the crush a friend blundered past, his hands clutching his eyes. He’d just been pepper-sprayed directly in his left eye as a horse bore down on him. It was only the quick thinking of another friend who managed to pull him out of the crowd that saved him from much worse injury.

Washing his eye out with water on the steps of the Town Hall, I realised for the first time just how much pepper spray hurts. He told me that he’d only shown up to the protest twenty minutes earlier, and, like me, had found himself unexpectedly on the frontline. The next day when I returned as a legal observer, I had the opportunity to talk to people whose experiences sounded very similar. People were picked out at random from the crowd and dragged along the ground to processing vans where some waited for up to two hours without water. Others were driven to police stations as far away as Heidelberg and Altona, and, after being held for a few hours, were released without charge. A first-aid volunteer had been trampled by a horse and taken to hospital, and a student on his way home from uni was pulled out of the crowd and arrested. 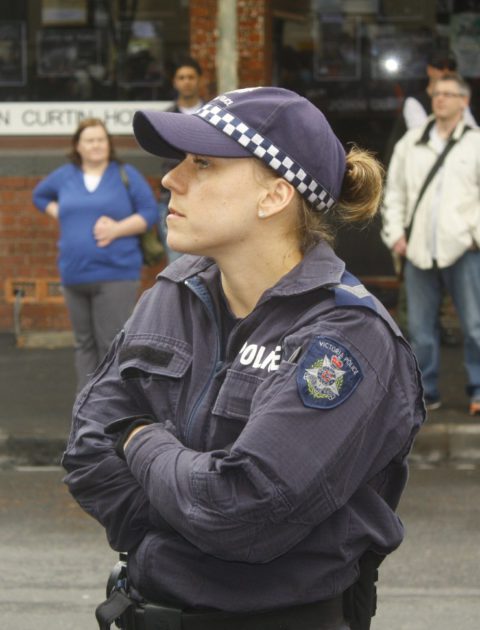 Photo courtesy of Sienna Merope. A police officer without her name badge.

From what I saw on Friday, and from what people told me on Saturday, it seemed that the police’s tactic comprised of the systematic intimidation not of trouble-makers but of anyone who had the impudence to show up. The attitude was summed up by the number of police officers who’d removed their name badges. Accountability seemed to be suspended. One police officer told me to “get a job”. When I told him I had one he told me to “get a life”.

It seems that he and Robert Doyle have a very peculiar idea of what “a life” might entail. Exercising democratic rights of expression and assembly don’t seem to rate a mention. Instead, they offered us   the spectacle of City Square ‘given back to the people’, closed in by wire fencing, patrolled by private security guards and two police officers holding attack dogs on leashes. And yet a forlorn sign in the middle of the barren compacted sand assures us: “City Square businesses are open for trading”.

Photo courtesy of Occupy Melbourne. City Square on Day 1 of the protest. 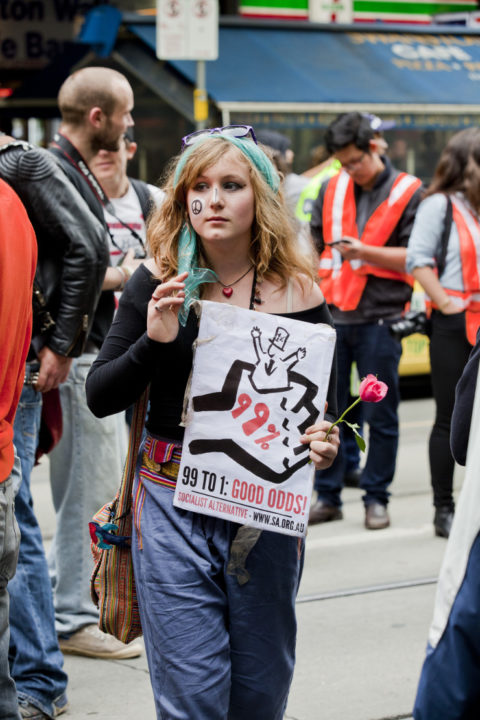 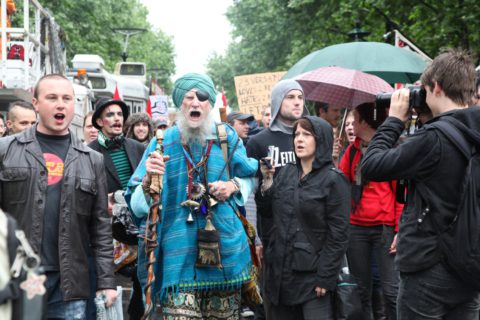