East Timor and Australia will sign a maritime boundary agreement at the UN headquarters in New York tomorrow, putting their long-running border dispute to rest.

Although the finer details of the treaty remain under wraps, all reports suggest that the Timorese will secure their permanent maritime boundaries and a fairer share of government revenues from the Greater Sunrise gas field.

Such an outcome will be testament to the determination of the Timorese people and their governments to stand firm in the face of a neighbouring bully and claim their sovereign rights. This debate has never been about charity, it’s always been about justice and what the Timorese are legally entitled to.

Successive Australian Governments, wanting to keep the riches of the Timor Sea to themselves, have deliberately and persistently frustrated East Timor’s attempts to establish permanent boundaries.

Even though all of the oil and gas fields contested over the years are located closer to Timor than to Australia, our Government has doggedly tried to short-change the Timorese at every opportunity.

After Australia had unilaterally tapped the Laminaria Corallina fields – without the Timorese receiving a single cent, it jostled Timor into a temporary resource-sharing agreement, the Timor Sea Treaty, that allowed it to take a slice of the revenue from the Bayu-Undan fields, which were the fledgling nation’s most important source of revenue.

Australia then set its sights on the massive Greater Sunrise gas field. Its initial proposal was to allow Timor a miserly 18 per cent of the government revenue.

The prevailing legal consensus is that if permanent maritime boundaries were established in keeping with current international law, then most, if not all, of the field would be located within East Timor’s exclusive economic zone.

This debate has never been about charity, it’s always been about justice and what the Timorese are legally entitled to.

But international law was of little relevance to Australia. Just two months before East Timor became independent in 2002, the Australian Government withdrew its recognition of the maritime boundary jurisdiction of the International Court of Justice. Put simply, the Australian Government turned its back on the independent umpire signalling that it had no intention of playing by the rules.

So despite East Timor wanting to establish permanent maritime boundaries, in 2006 the Australian Government managed to walk away with another “temporary” agreement. This one, CMATS, would postpone for 50 years discussions about sovereignty – ie. which nation actually owns the area – and would see the government revenue from Greater Sunrise split 50/50. 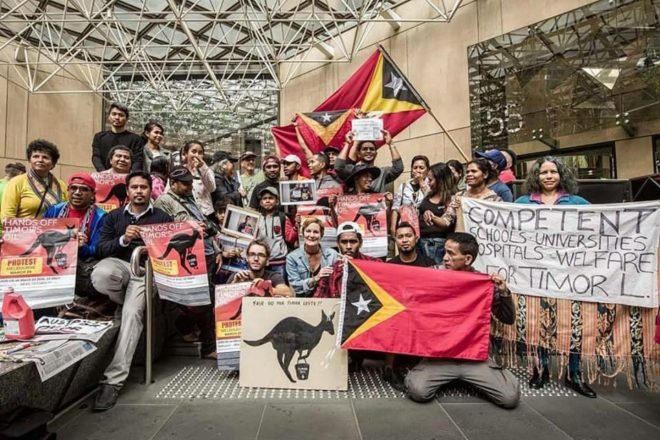 Exactly how Australia managed to get such a deal was exposed in 2013 when a senior intelligence officer revealed that an AusAid project was used as a cover to bug the Timorese cabinet room during the negotiations.

The Timorese Government was understandably upset and triggered a conflict resolution mechanism set out in the Timor Sea Treaty, to prompt mediation in The Hague. But just days before the meeting was to take place, an ASIO raid was ordered on the Canberra offices of Timor’s legal team and the passport of “Witness K” was seized preventing him from travelling to The Hague to present evidence.

This allowed Timor to take legal action against Australia and in a provisional judgement, the International Court of Justice slammed the heavy-handed actions and issued an unprecedented order for the Australian Government to stop interfering with Timor’s communications.

With the upper hand in what would have been a long and embarrassing legal battle for Australia, Timor finally had some bargaining power. But in an extraordinary act of good faith, Timor traded that away – it withdrew its case in return for Australia agreeing to return to the negotiating table to discuss permanent boundaries. But true to form, Australia soon reverted to its belligerent tactics and the talks were on a road to nowhere.

Eventually in 2016 with no where else to turn, the Timorese launched a “compulsory conciliation” procedure at the UN. This is a mechanism that had never been used before and exists specifically for when one country refuses to recognise the jurisdiction of the independent umpire that would normally settle such disputes.

The Australian Government’s long held stonewalling tactics began to crumble after its undignified attempt to wriggle out of the process was soundly rejected by the UN-constituted commission.

The resulting treaty will set a permanent boundary along the median line halfway between the two coastlines. This is great news, but the exact placement of the all-important lateral, or side, boundaries which will determine the scope of Timor’s exclusive economic zone, is still unknown.

Even if the new treaty turns out to be less than ideal in regards to the size of Timor’s sovereign territory, it gets the job done in that it delivers what the Timorese have always wanted – permanent maritime boundaries – and it appears that the revenue share reflects the likely outcome had the maritime boundaries been set in keeping with contemporary international law. It seems that it has also managed to do so without Australia having to concede territory it hadn’t already conceded to Indonesia in 1972. So the politicians on both sides of the Timor Sea have saved face.

Whatever devils might be in the detail, there is little doubt that this new treaty will be a far better deal for East Timor.

This is a big win for the Timorese and also a reminder of the importance of the UN’s peaceful arbitration processes. It’s also a win for the Australian citizens who stood up in solidarity with the Timorese people to demand that our Government do the right thing. It’s been a long time coming.

Tom Clarke is a spokesperson for the Timor Sea Justice Campaign.