Despite being geographically on Australia’s doorstep, Indonesia is in many ways a very distant place. Australians have a tendency to associate the world’s fourth most populous country with Bali, Bintang and bombs, meaning there are big gaps in Australians’ knowledge of our rising neighbour. For all the numerous, striking differences between the two countries, there are a remarkable number of things the countries have in common; unacceptable rates of violence against women is one of them.

The deaths of Laa Chol and Eurydice Dixon in Melbourne, Australia brought the nation’s problems with violence against women straight back to the surface of the public’s consciousness, with social and mass media platforms filled with public outrage and calls to action. While the issue often fades from media headlines, gender-based violence remains a constant reality in Australia and Indonesia.

In 2012, the Australian Bureau of Statistics (ABS) released a report saying that 40.8 per cent of women have experienced violence since the age of 15[1]. Similarly, across the Timor Sea at the Indonesian Body of Statistics, a study released in 2017 showed that one in three women from the ages of 15–64 have experienced violence[2]. The similarity of these statistics, taken from two very different countries, demonstrates that this problem defies national borders.

Yuni Asriyanti, an Indonesian women’s rights activist currently living in Melbourne, Australia shared her insight about violence against women in reference to her experience of living in the two countries, “Violence against women is a global issue. Worldwide, women face numerous kinds of violence and discrimination, this includes both women in Indonesia and in Australia. Women are still experiencing domestic violence, sexual violence and discrimination in the workplace as well as stereotyping and stigmatisation all over, it is only the different cultures that make the manifestation of violence different.”

The diversity and richness of Indonesian cultures is a remarkable asset and what makes the country extraordinary. With more than 260,000,000 inhabitants, hundreds of ethnic groups speaking hundreds of distinct languages and varying belief systems, the cultural diversity contained within the expansive archipelago is astounding. The forms of gender-based violence in Indonesia are numerous, and they’re all interlinked with culture, religion, politics and law.

A clause of the law provides that courts may – on request from parents – grant exceptions for girls younger than 16 to marry. Komnas Perempuan recorded 11,819 such expectations granted by the courts in 2017.

The practices of child marriage, polygamy, female genital mutilation and other forms of gender-based discrimination are often legitimised by religious interpretations in Indonesia. Child marriage is rampant across the country and BPS data shows that 23 per cent of women surveyed in the 20–24 age range were married before the age of 18[3]. The root of the problem lies in age-old cultural practices, but the 1974 Marriage Law, which sets the legal minimum age for girls to marry at 16, means that child marriage is often state sanctioned. A clause of the law provides that courts may – on request from parents – grant exceptions for girls younger than 16 to marry. Komnas Perempuan recorded 11,819 such expectations granted by the courts in 2017. This legalisation of child marriage conflicts with Indonesia’s human rights obligations as child marriage contravenes a number of treaties to which Indonesia is a party to, and is also contradictory to Indonesia’s own child protection laws. Child marriage results in bad education outcomes for girls, creates extreme vulnerabilities in experiencing reproductive health complications and data demonstrates that child marriages are more likely to result in domestic violence.

Another issue with this Marriage Law is the permissibility of polygamy that is written into it, whereby, upon fulfilling a number of requirements Muslim men may marry up to four women. State-sanctioned polygamy is infrequent but polygamous nikah siri marriages – which are performed in accordance with religious requirements but not registered by the state – are more common.

Komnas Perempuan has documented 421 discriminatory policies operating across the archipelago – 333 of these policies directly infringe on women’s human rights regulating women’s expression and freedom including by enforcing gender-specific curfews and mandating the compulsory wearing of head scarfs. 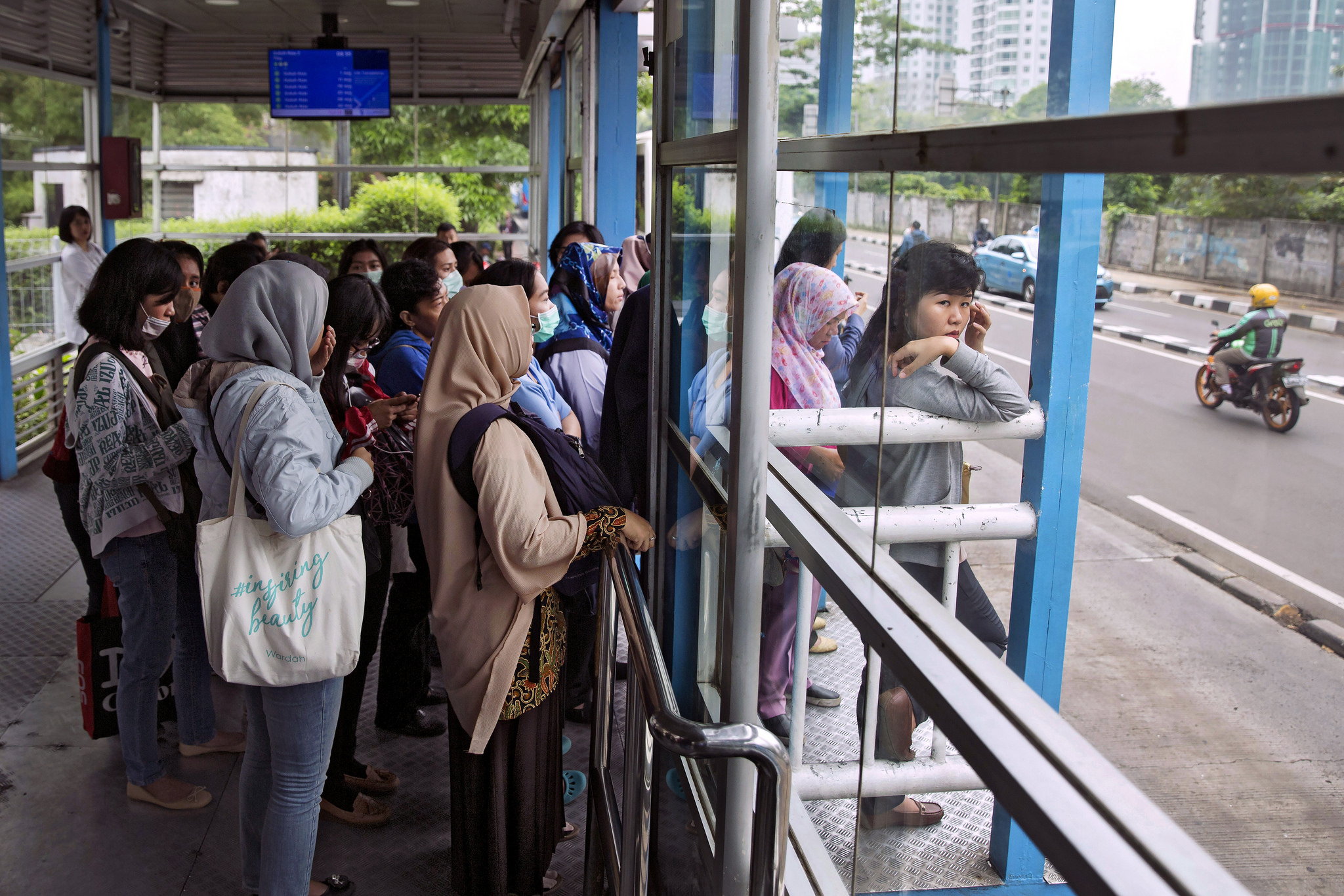 UN Women has established partnership with TransJakarta, a government-owned transportation provider in Jakarta. Through this partnership a number of activities will be conducted including training on gender based violence (GBV) prevention and handling for bus operators, and raising awareness on GBV prevention in public transportation through campaign activities. Photo: UN Women/Ryan Brown

Increasingly in Indonesia, women’s bodies and freedoms are targeted for regulation by discriminatory policies and practices that operate in the name of morality and religion. Komnas Perempuan has documented 421 discriminatory policies operating across the archipelago – 333 of these policies directly infringe on women’s human rights regulating women’s expression and freedom including by enforcing gender-specific curfews and mandating the compulsory wearing of head scarfs.

Whilst violations of women’s human rights occur in the name of religion, religious individuals and groups are also on the frontline fighting violence and discrimination through a lens of progressive religion. These groups use religious interpretations to seek social justice, gender equality and preach messages of anti-violence. 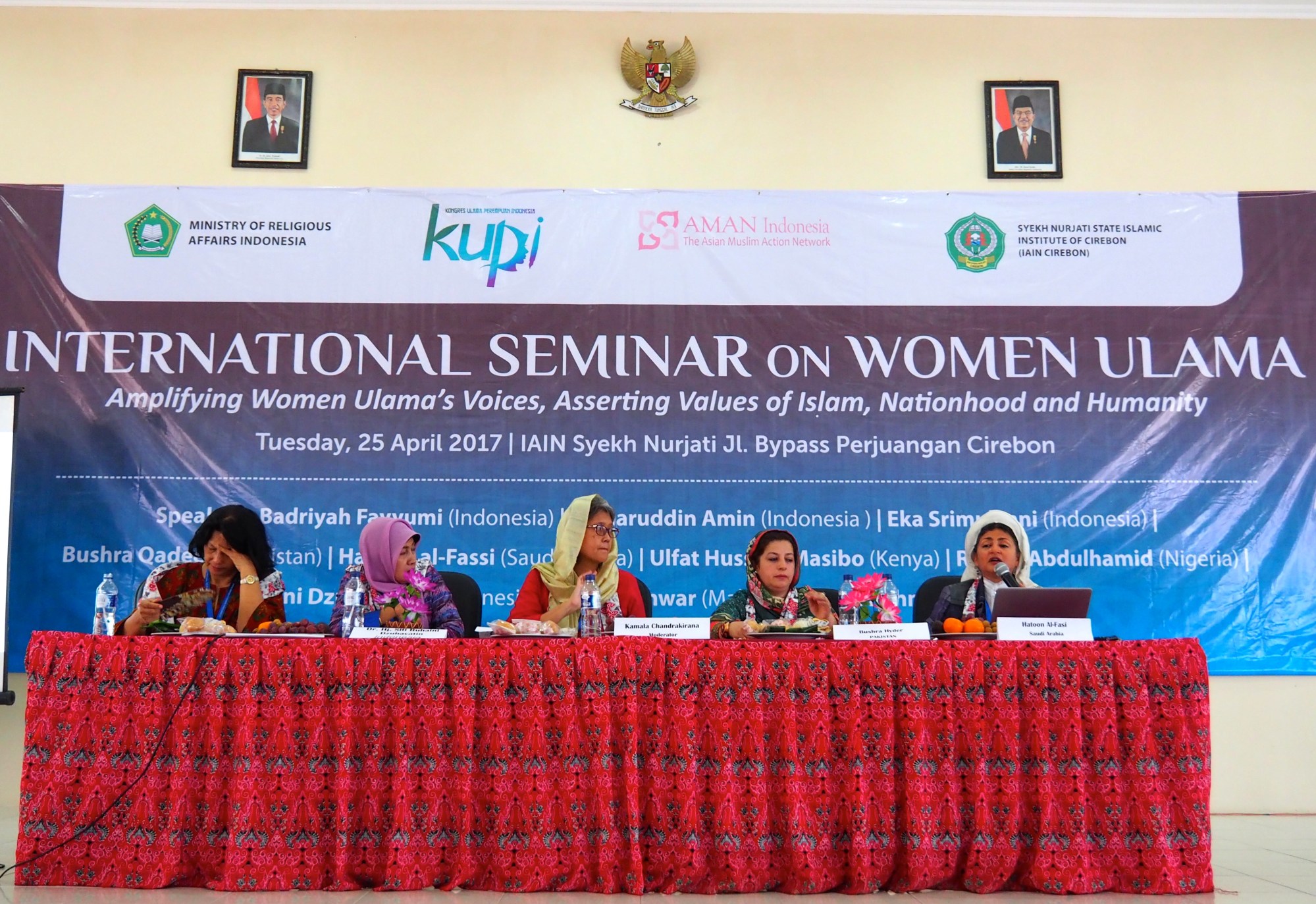 The world-first Women’s Ulama Congress (KUPI), held in Indonesia in early 2017, is a pertinent example of progressive Islam fighting against gender-based violence and discrimination. At this congress, more than 500 women Islamic scholars came together to deliberate on pressing issues, including sexual violence, religious extremism and child marriage. In a groundbreaking moment during the proceedings, the women ulama issued a religious ruling against child marriage, a practice that has historically been justified through religion.

This focal role that religion plays in society is a major difference between Indonesia and Australia but not a difference that means the two countries should not be working closer together to combat the global scourge of violence against women.

Nina Nurmila, Commissioner of Komnas Perempuan and Professor of Gender and Islamic Studies at the State Islamic University (UIN) Bandung, Indonesia, talking about the importance of KUPI explains: “Unfortunately patriarchal readings of the Qur’an are dominant and religion is often used and abused to justify women’s subordination and violence against women. Therefore, KUPI is very important in providing alternative interpretations to religious texts so that this texts are read from a perspective of gender equality to eliminate the use and abuse of religion to justify violence against women”.

This focal role that religion plays in society is a major difference between Indonesia and Australia but not a difference that means the two countries should not be working closer together to combat the global scourge of violence against women. When asked how bilateral efforts can be increased to combat the problem, Asriyanti explains, “Until now, Australia has given a lot of support to Indonesia in its efforts to eliminate violence against women but this support has generally materialised through government-to-government programs. Aside from these government initiatives, what we need to do is to reinforce the people-to-people connections, cooperation and solidarity between societies, to overcome this problem and bring our countries closer”.

There are striking differences between Australia and Indonesia but also a multitude of commonalties. What’s needed is more avenues for exchanges between individual people and between communities and spaces for collaboration where Australians and Indonesians can work together at fighting against the problem of violence against women, doing practical things to increase the fulfilment of women’s human rights.

Let’s not forget the power of transnational movements and international collaboration in helping to break down cultural barriers and increase solidarity.