In his 1999 essay on Reconsidering “Islamophobia”, the late academic Fred Halliday argued that “no subject confuses us” more than that of the relationship between Islam and the West.

Ignorance, fear and shallow stereotypes dominate a discussion of caricatures about a clash of civilisations. We typically have a limited vocabulary when describing Muslims living in the West, and Halliday went on to concede that many bigots mistakenly target everyday innocent Muslims as a result.

Halliday is, however, critical of the term “Islamophobia”.

He argues that the word makes no distinction between idea and person – between Islam and Muslim. It compels us to see conformity where there is none and implies that there is a single Islam.

The word Islamophobia is then a self-fulfilling prophecy that produces the Islamophobic tendency of constructing an essential “Muslim” into a single Islamic figure. It blurs the necessary division that should be made between a person’s choice to follow a faith and their inalterable “fate” in belonging to a race.

It has become a common argument that we cannot be racist to Muslims because Islam is not a race.

Unlike conventional assumptions of discrimination, Islamophobia rests upon a Muslim identity that is not given to us by “nature” – that is, not biological – unlike, for example, anti-Semitism, sexism or homophobia, which are dependent on a subject that is biologically determined.

It has become a common argument in today’s ideologically charged world of homeland security to say, in response to the backlash that Muslims face, that we cannot be racist to Muslims because Islam is not a race.

In this argument, critics reject the awkward term Islamophobia because they argue that it simply curtails the rights to criticise a religion of bad and illiberal ideas. We cannot be racist for attacking Islam and its undemocratic sharia or its patriarchal imposition of garbs like hijabs, niqabs and burqas.

British Journalist Polly Toynbee articulated the position in its most brutish simplicity in her column, “Does being an Islamophobe make me a racist?” She starts her piece with a provocative challenge to the politically correct and brashly declares, “I am an Islamophobe!” Toynbee concludes in her column that we, as liberals, must properly recognise that Muslims suffer “discrimination on the grounds of race, rather than religion”. It is our right, she imputes, to attack the latter.

But this argument fails to understand how racism works. It is a position that, I feel, is linked to a historical confusion about the Muslim as an identity of the West. Are Muslims religious, racial, ideological or biological? To rephrase Halliday’s initial words, the denial that Islamophobia is racism perhaps occurs because nothing “confuses us more” than the Muslim of the West.

Racism is not, therefore, the result of mere ignorance or intolerance. It is about power, not “races”.

“Muslim” as enemy of the West

The “Muslim” as an enemy has a long evolving history in Western and Christian folklore. By the 17th century, Europe began to invent a more complex and carefully constructed view of the figure. The Muslim as an oppositional identity evolved from its first archetypical image of a warring prophet Muhammad: enemy of the church, symbolic of all Muslims and a lustful example of a sinner. Eventually, the Orient as an imagined geography – its people, beliefs, and cultures – came to be something of a historical terra nullius. As a blank slate to be rewritten, it came to serve Europe’s colonial and worldly appetite for describing their capture of spice, their marvel, dominance and seafaring adventures.

The Thousand and One Arabian Nights tales was a colourful, suspenseful, page-turner that brimmed with dangerous intrigue and invitation to explore the Islamicate world of arches and rolling dunes. By the late 18th century, the book appeared in French and English and illustrated for its European reader a bawdy, misogynous, virtuous, adventurous imagery of the East.

Colonised by European guns and Western history, the Orient was the place to script out fantasies of racial dominance. In the late 19th century, Europe’s relentless, violent and scientific march towards modernity combined with its colonial project to justify a biological and anthropological ranking of world “races”.

The work of French scholar Ernest Renan was typical of the self-gratifying role of profiling non-white Others. Renan’s Christianity was naturally the leading religion and a product of the higher Aryan race. Islam, in lagging comparison, came of a lower, Semitic origin and represented an inhibiting “iron circle” around the heads of believers that kept them from progressing.

Today’s contemporary image of the stereotypical Muslim emerges partly from a reading and encounter with history, but also from tales such as a Thousand and One Arabian Nights. And like most mythical creatures in those tales, the Muslim is half figment and anthropology. It is what all “racial” subjects are: a biological and artistic description of the Other’s culture.

There is a telling example of this figure in our literary stock, when Shakespeare’s Iago described Othello as “an old black ram” and “the devil.” Othello was a cocktail of East and West, with a “sooty bosom” and “thick lips”. A “lascivious Moor” who held the “sword of Spain”, he is for our contemporary Islamophobic times the ideal figure to describe Halliday’s confusion over the Muslim as an identity. He is West and East, neither here nor there – not quite race nor religion, and a bit of both.

As the scholar Ani Loomba argues, there is real difficulty in deciding whether Othello’s tragedy has to do with him being a “circumcised dog” or his having a “sooty bosom”. It is also unnecessary, she continues, for us to conclude on whether Othello is more or less African or Muslim. They were both often regarded as morally and physically darker than Christians.

Take, for example, Cesare Vecellio’s sixteenth-century picture of a Moor. It shows a man with a turban, flowing robes and a sword, with thick lips and dark skin. Despite the physical difference between most Spanish Moors and most sub-Saharan Africans, the image shows how often skin colour, religion, and location were contradictorily yoked together within ideologies of “race”. 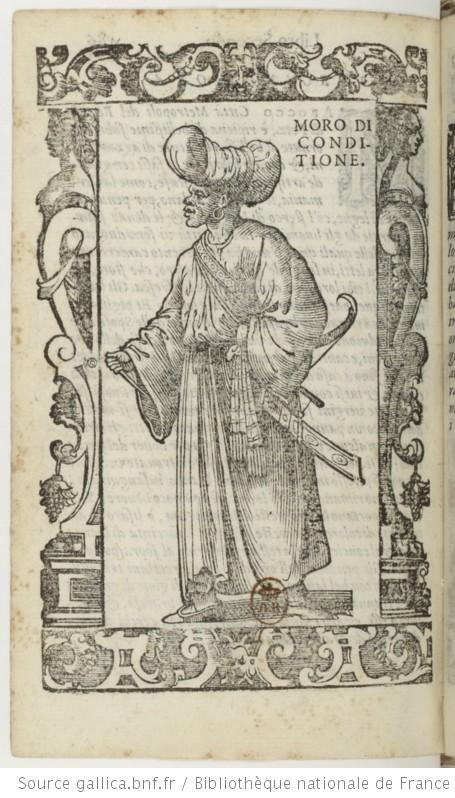 Racism forms imaginaries out of cultural fantasies, fears, symbols, caricatures, stereotypes and nightmares that stitch together, without being consistent or coherent, a threatening figure of the “Other”. In post-Reconquista Spain, centuries before modern definitions of racism existed, Jews and Muslims were forced to convert to Christianity or face expulsion.

Shortly afterward existing Christians began to suspect converted Jews and Muslims and their offspring for not being “true” Christian believers. Eventually, a doctrine developed that this was because their old religion was “in” their blood.

The folk-devil of racist imagination is commonly thus a displaced figure expressing our collective anxieties and fears.

Racism is about power, not race

In the racial imaginary, the Other is seen as a violation of the self and our body, our property, our sacred symbols and autonomy. The process very often encapsulates an internal sense of our inhuman destructiveness and our capacity for cruelty and violation, which we project onto an external figure. Every racist thinks they are compelled to act.

The folk-devil of racist imagination is commonly thus a displaced figure expressing our collective anxieties and fears, a figure which apparently forces us to respond. It is a scapegoat embodying our paranoid convictions.

Folk-devils furthermore help express one’s love for a cultural and ethnic fantasy that describes a “pure” us by allowing us to worry about the breakdown of a holistic social order that never was. The devil’s trick is that he induces a feeling of fury about the theft of that thing that we never had. The tragic tale of Othello is Shakespeare’s master class that compels us to see the violent pitfalls of such tricks.

The fantasy of a racist folk-devil gallery – blacks, Jews, Asians and Muslims – is a facade of Otherness that disguises a unitary aim. Racism’s constellation of Others is constructed to assemble the fictional idea of the purity of the nation or the moral community under threat. It is the figure of the Muslim that brings “Team Australia” into a collective reality that must be protected against an exaggerated threat.

A key feature of racist imaginaries is therefore the stringing together of the highly emotional charge of images, rhetorics and narratives of both “them” the perpetrators and “us” the victims. Think only of the semi-obsession our tabloids have in describing the contradictory, fragmentary nature of everything Islamic as a story of an anti-Western threat.

From this perspective there is only one racism, which disguises itself opportunistically beneath a variety of publicly acceptable codes and discourses about being Australian. However, there is no single expression of this racism, but a plurality of manifestations that arise contextually in response to different historical circumstances.

Those who claim that Islamophobia is not racism rely on a “Eurocentric reading” that forecloses the wide techniques of how racism operates.

It is not an exaggeration to say that the racism we define by the actions of a vulgar few on buses and trams obscures a proper reading of racism’s broad range of techniques. The public outcry against cussing drunks who use the n-word on our public transport is a catharsis that allows modern liberal societies to ignore, for the most part, that modernity was built on a systematic, institutional and material racism, which still privileges whiteness over otherness today.

Racism is about promoting and naturalising “practices” of violence, contempt, intolerance, humiliation and exploitation in constructed discourses of Other representations. It is the articulation of this violence around the stigma of their otherness – of their name, skin colour and religion.

Racism is not, therefore, the result of mere ignorance or intolerance.

It is about power, not “races”.

Scholars have already moved to argue that we should not define racism in primarily biological terms, but rather that race was the product of the process of racialisation.

That is to say, like Othello, the Muslim subject of Islamophobia is processed as mix of ingredients that includes both loudness and silence. It is as much about a loud and vocal hostility as it is about the silencing of other voices from the Muslim world.

In the debates about human values, Islam is now doomed to be relegated as simply a defensive set of speeches that aim only to exonerate it from the acts of wife-beatings and beheadings, which are loudly stated.

Critics spend too much time trying to discover Islamophobia’s true kernel through etymological discussions. But the real question is not whether Islamophobia is racism. Rather, what can Islamophobia tell us about how racism evolves? Ironically, the question brings the scrutiny back to Othello’s identity rather than that of Iago, and it is this that is most telling.

Islamophobia is not about “their” identity. It is as much about “ours”.

Dr Yassir Morsi is a researcher at the International Centre for Muslim and Non-Muslim Understanding at the University of South Australia.