This is no easy task. Only eight out of 44 attempted past referendums have succeeded. Constitutional reform presents an immense collaborative and consensus-building challenge, both within Indigenous Australia and in wider politics.

On 10-11 December 2016 the Referendum Council kicked off its First Nations Regional Dialogues in Hobart – an historic opportunity for Indigenous people around Australia to discuss the reforms they want. But Indigenous consensus on its own will not guarantee success.

Constitutional change requires a “double majority” approval: a majority of voters in a majority of states, and a majority overall, need to vote “yes”. To achieve this, any reform needs to be supported by Australians across the political spectrum. Political leaders from both the left and the right need to agree to and help champion the proposal.

While the political challenge is immense, Australians should be optimistic that majority consensus can be achieved. This is because there are significant areas of unexplored common ground evident on all sides of this complex debate. In my experience, with hard work, patience and empathy, the common ground can be uncovered and encouraged.

Take the Indigenous politics. Some people assume that constitutional recognition and a treaty are incompatible and in direct competition. Delve deeper and differences start to melt away: the perceived dichotomy between constitutional recognition and a treaty is largely superficial and false. It dissolves once you get down to the details of proposed reforms.

The perceived dichotomy between constitutional recognition and a treaty is largely superficial and false.

Observing recent treaty discussions in Melbourne, I was struck by key proposals put forward. The need for an Indigenous representative structure was central. The majority seemed to agree an Indigenous body is needed to give Indigenous peoples a formal voice in their affairs and to negotiate any treaty. Some saw this happening at the state level.

Others, including leading barrister and treaty advocate Tony McAvoy, emphasise the need for a national First Nations Assembly. The need for ongoing agreement-making mechanisms under a Truth and Reconciliation Commission, or Treaty Commission, was also a common recurring theme, as was the need for formal recognition of the First Nations of Victoria, their cultures and languages.

Representation, agreement-making, language and culture recognition. These broad themes are not new in Indigenous affairs. The history of Indigenous calls for representative structures, cultural recognition and agreements stretches back decades. Nor are the ideas unique to Victoria, though Victoria has taken important steps forward in instigating formal treaty discussions.

The same ideas have been raised around the country. At the opposite end of the continent in Far North Queensland, Noel Pearson has argued for a national First Nations representative body to be established in the Constitution. Pearson speaks about the need for an overseeing commission to mediate fairer agreement-making, and often calls for practical recognition of First Nations, their languages and cultures.

These are same key themes discussed in Victorian treaty talks, but Pearson tends to talk about such reforms under the banner of constitutional recognition. Whatever term is adopted, the substance of the proposals is remarkably similar.

This is unsurprising. Aspirations for treaties, like aspirations for constitutional recognition, carry similar, if not identical, aims. They aim for increased Indigenous empowerment, self-determination and mutual respect – a fairer relationship. 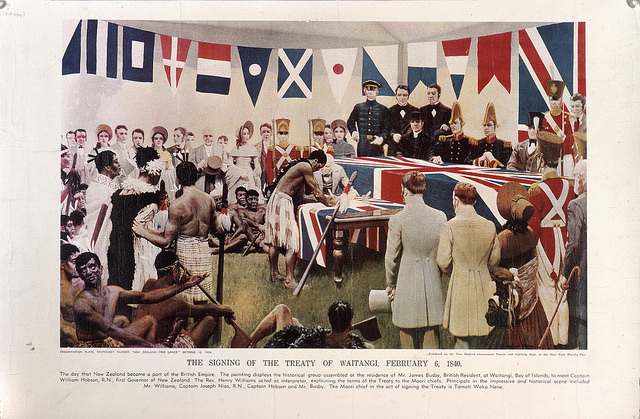 Reconstruction of the Signing of the Treaty of Waitangi (6 February 1840).

Australia has few of these mechanisms. We have no federal bill of rights or equality guarantee in the Constitution (we just have the Racial Discrimination Act 1975 (Cth) which is ordinary legislation and can be suspended or amended by the Commonwealth Parliament).

We have no unified First Nations representative structure as part of our national institutional architecture (we have the Congress of Australia’s First Peoples, but it has been severely de-funded, and Warren Mundine’s advisory body does not seem to be effectively consulted by government).

We had no founding treaty (though we have native title agreements that look much like treaties). We have no official First Nations language or cultural recognition (though New South Wales seems to be taking positive steps in giving legal recognition to Indigenous languages).

But to come to fruition both a treaty and constitutional recognition require agreement by governments and the Australian people. They both require consensus. No ambitious reform can happen unilaterally. Reform happens collaboratively, through negotiation and by building common ground. Whether it’s treaty or constitutional reform or both, any such reforms will require negotiation, compromise and good will from all sides.

What’s the difference between constitutional recognition and a treaty?

The key difference between achieving reforms through the Constitution and through a treaty is enforceability and stability. In treaty discussions people often ask, how do you stop treaty promises being breached? How do you stop any representative structure set up in legislation being thrown out by the next government, like the Aboriginal and Torres Strait Islander Commission?

The answer is that you try to put the most important reforms in the Constitution so they are guaranteed for future generations. The Constitution is where binding and enduring promises are made. That’s why Cape York Institute argues that the Indigenous representative body should be underpinned by a constitutional guarantee.

It’s also why the assumption that constitutional recognition is weak and symbolic, while treaty is strong and practical, is oversimplified and premature. It all depends what reforms are negotiated and agreed. There can be weak constitutional recognition – a purely symbolic preamble, for example, would be weak. There can also be a weak treaty, depending on its negotiated content.

The bottom line is that only the Constitution legally curtails the power of the Commonwealth Parliament. If you want the Parliament to do something, you need to put it in the Constitution. Understood in this light, constitutional recognition is actually the more ambitious endeavour.

It is also the more difficult endeavour, because it requires a referendum. Advocates therefore need to be politically savvy and clever about what they try to get in the Constitution, and what they do outside it in legislation and through agreements. Constitutional recognition can be a package of reforms. In deciding what sits where in the package, reform advocates must weigh the risks of referendum defeat against the risks of legislative reforms being undone by future Parliaments.

As the Referendum Council undertakes its First Nations Regional Dialogues around Australia, new hope is emerging that Indigenous majority consensus can be achieved on a package of constitutional and legislative reforms to ensure a fairer relationship between Indigenous peoples and the Australian state.

Whether you call it constitutional recognition or a treaty or both, the conceptual overlap between these two parallel conversations must now be further explored. The challenge will be to rise high enough above the ramparts of left–right politics and petty differences to see the common ground.

Shireen Morris is a senior policy adviser at Cape York Institute, a PhD candidate at Monash University and the co-editor of "The Forgotten People: liberal and conservative approaches to recognising indigenous peoples".