The trafficking of human beings has existed throughout the ages; in recent times transforming into an issue of global importance, touching the Asia-Pacific and indeed Australia directly. Despite widespread media coverage as well as research into this phenomenon, there are conflicting views regarding which factors contribute to the vulnerability of trafficked people. The Strategic Information Response Network notes that while some reports cite poverty and a lack of education as common factors, other reports assert that in different locales, different factors increase the susceptibility of victims being trafficked. There is a clear link in some countries between ethnic minorities and trafficking victims.

The United Nations observes that inter-ethnic and inter-racial tensions and conflict are erupting in nearly every region of the world today, with the severity of conflicts involving minorities often ending in tragic consequences. A case in point is Burma’s ethnic conflict in which the Burmese government has committed mass atrocities through explicitly targeting its ethnic minority populations. The scale and extent of forced displacement, rape and sexual violence, torture and extrajudicial killings, all of which constitute crimes against humanity and war crimes, have been reported extensively by successive United Nations Special Rapporteurs on the situation of human rights in Myanmar. Victims of the Burmese government’s discriminatory policies are subsequent targeted by traffickers.

In its military campaigns against armed ethnic opposition groups, the Tatmadaw (Myanmar Armed Forces) implements its notorious ‘Four Cuts’ Policy aimed at cutting off four crucial links between insurgents and the civilian population: food, finance, intelligence and recruits.  In addition, this policy is accompanied by a notorious ‘shoot on sight’ policy in ethnic minority areas which results in individuals who are found outside their villages being shot.

Stripped off their Burmese citizenship in 1982, the case of the Rohingya ethnic minority illustrates the extent to which ethnic minority populations in Burma have been discriminated against. Most experts agree that conditions in North Rakhine State where the Rohingya reside are among the worst in Burma if not globally, with government-sanctioned discriminatory policies directed specifically at them.  This was evident in comments made by the Myanmar Consulate in Hong Kong in 2009. Mr Ye Myint Aung sparked a public outcry when he commented that the Rohingya “are neither ‘Myanmar People’ nor Myanmar’s ethnic group” and while “their complexion is ‘dark brown’ … the complexion of Myanmar people is fair and soft, good looking”. In fact, the Rohingya face abuses that have increasingly worsened. The Irish Centre for Human Rights were provided with accounts which revealed agencies of the Burmese government’s State Peace and Development Council were responsible for the discriminate killing of the Rohingya, from deaths resulting from the use of live ammunition to torture and accounts of individuals being beaten to death while performing forced labour.

It is not surprising then that Burma has become a major source country for the trafficking of women, children and men in the Asia-Pacific Region. Although victims of trafficking are most often migrants, there is a distinction between migrants who flee due to threats to their life, as opposed to migrants who merely choose to seek better economic opportunities. The Advisory Council of Jurists observes how the former will go to great lengths, such as attempting to circumvent legal restrictions, as they have more to lose if deported back to their country of origin. For these reasons, that they end up becoming more vulnerable to the deceptive and coercive practices of traffickers.

Ethnic minorities in Burma represent the most glaring example of migrants who flee due to direct threats to their lives. In fact, the Women’s Commission for Refugee Women and Children observes how women and girls from ethnic minorities who live in fear of sexual violence in Burma are later preyed upon by traffickers and exploitative employers upon fleeing the country.  They are particularly vulnerable in camp situations as illustrated by the UNCHR, where it uncovered a trafficking ring operating from a refugee camp in Thailand targeting refugee children.

Similarly, corrupt public officials specifically prey on ethnic minority refugees. Regardless of whether they possess UNHCR identification, a US government report notes how Malaysian government officials transport these refugees to the Malaysia-Thailand border for deportation regularly where human traffickers take possession of them and issue ransom demands. Freedom is only possible once these money demands are met, if not they are turned over to human peddlers in Thailand. Women are trafficked as prostitutes, child beggars, and domestic servants while men end up working in substandard and dangerous labour conditions in textile factories, fishing or other industrial settings around the region.

The numerous bilateral, regional as well as international initiatives and mechanisms to stem human trafficking have failed to address the link between this phenomenon and ethnic minorities fleeing from discriminatory practices. This is through reasserting the notion of state sovereignty and the safeguarding of national borders against non-citizens. Article 12 of the Bangkok Declaration on Irregular Migration allows a great degree of flexibility for countries to implement their own laws regarding migration and immigration, increasing the likelihood that international laws preventing the discrimination of ethnic minorities will unlikely be translated into domestic laws.

Human trafficking initiatives have also failed to ensure that protection mechanisms are in place to address the needs of ethnic minorities who have been trafficked. At the heart of this is the principle of non-refoulement, which prevents governments from returning refugees to a State where their freedom or lives may be compromised. There remains a strong emphasis on the repatriation, reintegration and sometimes deportation of trafficked victims regardless of whether they are refugees needing protection from refoulement. Unfortunately, these decisions are rarely challenged and sometimes even supported by governments and international agencies. 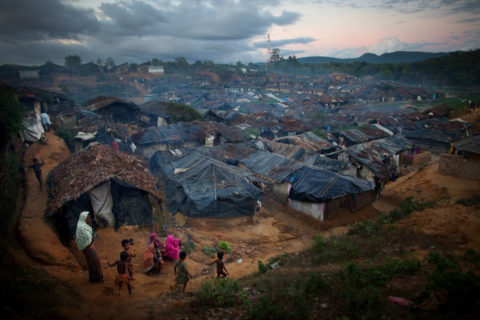 Australia as a Destination Country

As Australia has become a popular destination country for traffickers, the Australian government has initiated bilateral agreements with Burma as well as Thailand to prevent trafficking. Nevertheless, domestic legislation addressing the needs of trafficked victims has a strong focus on the repatriation and reintegration of victims in their country of origin. The Parliamentary Committee into the Trafficking of Women for Sexual Servitude recommended that the government ensure no women accepted into the victim support program be forced to return to their country and that arrangements be made to enable witnesses on Criminal Justice Stay (CJS) visas to return to their country of origin for short periods. Janet Phillips notes that the Government responded by accepting some of the Committee’s recommendations while rejecting the recommendation that trafficked women be accepted into the victim support program. The Government also rejected the recommendation that those who were granted a CJS visa be exempt from compulsory return to their country of origin.

This outcome is particularly disheartening given that Australia is party to the International Convention on The Elimination of All Forms of Racial Discrimination. It is clear that in the Burmese context, there is a strong connection between trafficked victims and discriminated ethnic minorities. Yet in denying these trafficked victims adequate protection, the Australian government is potentially reaffirming the discrimination faced by these minorities.

Ultimately, initiatives and mechanisms to combat trafficking conveniently ignore the underlying causes – whether economic or political – that motivate people to migrate. In doing so, they neglect the underlying fact that ethnic minorities flee Burma because they have been discriminated against, and this makes them increasingly vulnerable to traffickers. A sustainable solution to human trafficking should address the reasons for their predicament and subsequent flight, and in doing so rectify the long-standing injustice that ethnic minorities have had to endure.

ASEAN Chair as an Opportunity?

Given that Burma will chair the Association of Southeast Asian Nations (ASEAN) in 2014, it is essential that the connection between human trafficking and mass atrocities committed against ethnic minorities in Burma is addressed. Burma’s decision to accept the role of ASEAN chair this time around, having previously declined the opportunity in 2005, is a positive sign. While there may be numerous reasons for Burma accepting the role, it suggests that the government intends on improving relations with its regional neighbours and in doing so, improve its reputation as well.

Countries within the region, including Australia, now have greater leverage to put pressure on Burma to improve its human rights record. Member countries in ASEAN will no doubt want to ensure that Burma is qualified to chair the regional organisation, especially as Burma will be representing it at an international level. Failing to do so may tarnish the reputation of ASEAN as an organisation as well as causing embarrassment to countries associated with it.  As 2014 approaches, Burma’s action on preventing and redressing discrimination against ethnic minorities, and Australia’s own response to regional issues of racial discrimination, will come into sharper focus.  In the mean time there is much to be done to right the track record of wrongs committed against ethnic minorities in Burma and around our region.

Marie Ngiam is an Asia-Pacific Studies (Honours) and Law undergraduate at the Australian National University. This article was adapted from her research conducted at the University of Queensland’s Centre for the Responsibility to Protect where she was a summer research scholar.

Shares
Comments Off on Human Trafficking and Ethnic Minorities: the Case of Burma