By Michael Power. This article is part of our August theme, which focuses on the environment and human rights. Read more articles on this theme.

Kaylene Wilson lives in West Meadows, near Tullamarine in Melbourne’s West. She grew up in this area, and has seen it change from “a country area … surrounded by paddocks”, to the densely populated urban place it is now. She remembers when the Tullamarine Toxic Waste Landfill was opened in 1972; just a few years after the airport and the freeway were built.

Since then, millions of litres of liquid waste, including highly toxic substances, like heavy metals and polychlorinated biphenyls, have been dumped into this landfill. For decades now, residents have had to put up with intense smells and dust from the dump, bad enough to turn their sheets yellow when they hang them out to dry, and some days too bad to allow children outside to play.

The impacts of such projects are shouldered by communities who already have higher unemployment rates, enjoy less government services, and have lower health standards than the rest of Victoria.

Today, this part of Melbourne is distinguished by two things: one is a high level of socio-economic disadvantage — in 2006, the City of Hume had the fourth-lowest socio-economic index score in Melbourne. The other is an unusually high level of sickness and illness, which many residents attribute to exposure to the million of litres of toxic waste put into the dump over the years.

Kaylene explains that in this area there are a lot of suspicious cancers and illnesses that can’t be explained:

“Because I’ve lived in the area all my life … we sort of know a lot of people. So my phone was ringing off the hook then with all these people with all these sad stories about … motor neuron diseases and all these really weird funny things that you’ve never heard of before … So then we put in the paper that people could ring us if they’ve got any health concerns … and we were just inundated with people …. We’ve got a whole court in Gladstone Park [where] every house in the court, bar one, has had someone die.” 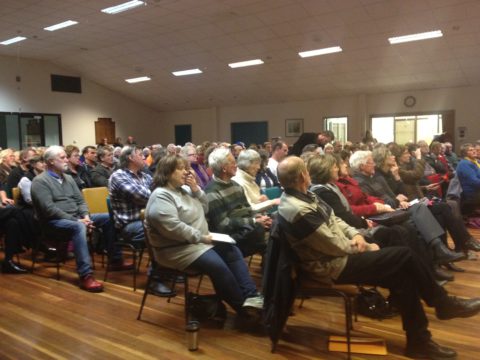 As an analytical concept, “environmental justice” has not yet gained much traction in Australia (at least, not in comparison to the United States where it is a principle formally recognised by the US Government and built into the operations of the US EPA). But stories like Kaylene’s show us that the reality of environmental in-justice — the fact that certain disadvantaged groups disproportionately bear the risks of environmental harm — has been around in Victoria for a while.

At the Environment Defenders Office (EDO) in Victoria where I work, many of our clients have been familiar with environmental justice for years; not as an idea, but as a lived experience. For many years we acted for the Terminate Tulla Toxic Dump Action Group (TTTDAG), a group of residents like Kaylene who object to themselves and their children being forced to shoulder the burden of Melbourne’s toxic waste, and who ultimately succeeded in having the dump closed in 2008.

For these people, environmental protection is not a matter of altruism; it’s a matter of survival.

Tracey Anton lives in Toongabbie, a small town in Gippsland primarily reliant on farming. In October 2011, Commonwealth Mining applied for a licence to explore for coal and coal seam gas (CSG), over an area including Tracey’s property. Like hundreds of regional Victorians who we have spoken to, Tracey does not want a coal mine or coal seam gas field in her community. But under Victorian law, she has very few rights against her property becoming an open-cut coal mine.

Coal mines create serious health risks for nearby communities because of the air pollution and potential water contamination they cause. Communities in coal mining areas have higher death rates and an increased risk of contracting lung disease, heart disease, high blood pressure and chronic kidney disease. Coal seam gas carries added risks because of the toxic chemicals often used in the extraction process, and has been linked to cancer, mutations, and brain and nervous system damage. And of course, both coal and CSG contribute to climate change: a serious health risk.

These health impacts are only ever borne by regional communities. You won’t find any coal mines or coal seam gas fields in Malvern or Toorak, just as you won’t find a toxic waste dump there. The impacts of such projects are shouldered by communities who already have higher unemployment rates, enjoy less government services, and have lower health standards than the rest of Victoria.  This provokes concerns about how decisions are made regarding these facilities and why “justice” and “fairness” considerations are not being taken in to account.

When we think of environmentalists, we often think of middle-class, tertiary-educated inner-city dwellers. It can be tempting to think that people outside this demographic (like regional or working-class communities) don’t care about the environment. This is not the experience of the EDO, which acts for very large numbers of people in outer suburban Melbourne and in regional Victoria, many of whom do not identify themselves as “greenies”, but all of whom care about protecting an environment that they can safely live in.

For these people, environmental protection is not a matter of altruism; it’s a matter of survival. They may not all have heard of “environmental justice” as an analytical concept, but all of them care about it and will fight for it if they can access the services and information necessary to do so.

The concept of “environmental justice” combines those of social justice and environmental protection. Although rarely discussed in Australia explicitly, EDO believes that environmental justice is a relevant concept here and could be a helpful lens through which to address quality of life and other human rights issues facing disadvantaged communities.

This article draws on a report published by the Environment Defenders Office (Victoria), which marks the culmination of a 12 month project generously supported by the Victoria Law Foundation. You can download the report here on the EDO website, or read the papers from the recent symposium on Environmental Justice that the EDO hosted in Melbourne.

Shares
Comments Off on Fossil Fuels, Toxic Waste, and the EDO – Environmental Justice in Action