Maurice Sendak once said, “Childhood is a very, very tricky business of surviving it.” His words take on a particular poignancy when reading The Empty Jar, a new children’s book by Pablo Browne and Jennifer Dawson, developed in collaboration with InTouch: the Multicultural Centre against Family Violence.

The Empty Jar is not just a children’s book. It’s also a therapeutic resource that aims to support children (aged between six and ten) who experience family violence.

“What we wanted to do was create a story that immigrant children were able to relate to,” says author Jennifer Dawson, who is also Senior Practitioner of the Counselling Programme at InTouch.

“We wanted them to hear this story being spoken and validated. A story about the additional issues that they face – not only in the trauma of family violence and conflict at home – but also the relationships that they have already left behind. And the many changes they’ve experienced in needing to learn a new language, arriving at a new school, and losing those relationships from their country of origin that were really important.”

The Empty Jar is a new initiative for InTouch, a Victorian not-for-profit organisation that provides services, programs and responses to issues of family violence in CALD (Culturally And Linguistically Diverse) communities. 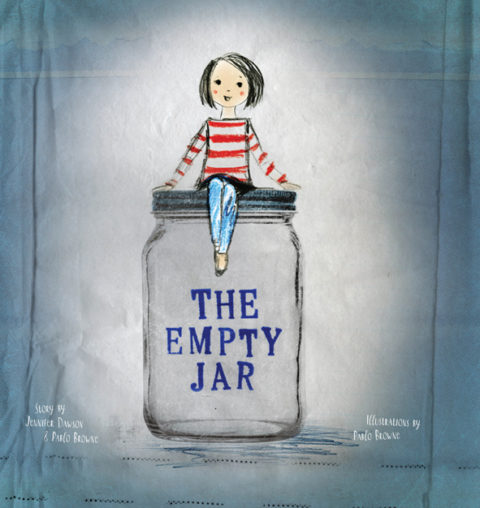 InTouch CEO Maya Avdibegovic acknowledges that “the work we do is not a message that’s easy to sell. We have been around for 30 years and there are so many people who have never heard of us or any other family violence services. Yet it is so important to raise awareness around the work that we do and the issues that we face.”

The Empty Jar is as much an awareness campaign as it is a haunting and hopeful book for children. Avdibegovic believes that this new picture-book medium will have an impact on how their message is received, “because if we just go out and say we support women who are dealing with domestic violence, nobody listens to that.”

Indeed, the results of a 2013 VicHealth survey into National Community Attitudes towards Violence against Women unfortunately prove Avdibegovic’s blind-eye belief: “Australia’s view on violence against women still poor in 2014.”

And although the report pointed to people from countries where English is not the main language spoken as a particular group who hold gender-inequality belief, Avdibegovic knows through her work at InTouch that such attitudes are not at all unique to any one cultural group, and certainly not unique to those who have recently arrived in Australia: “One in three women will experience family violence in their life – that’s globally,” she points out.

But the experiences of migrant women are unique, and part of the reason why InTouch is such a valuable organisation.

Avdibegovic says: “For all women – regardless of their cultural background – it’s really not that easy to leave the relationship. But for migrant women I think things are a bit more complicated, because there are some barriers and additional reasons why they don’t want to leave. Especially if they’re newly-arrived. If you migrate to a new country it’s really for the better future of your family and your children, and the last thing that you want to do is lose that family.”

Avdibegovic also points to “the community that those women don’t have,” acknowledging that they are, in a way, socially isolated. “The friends that they have are within their own communities, so we see quite often that once they leave the relationship there is further isolation from that community and a lack of support.”

With the release of The Empty Jar (which was launched at the 2014 Melbourne Writers Festival) comes a new way to help raise awareness for all that InTouch do and the issues being explored in Browne and Dawson’s book. The Empty Jar is a story for all children, not just those of migrant backgrounds. It’s also a way for children who have no awareness of family and domestic violence to be able to articulate what friends or family members may be going through.

Dawson explains: “Other children in the community might recognise or see children or friends at school and find a way to talk about them, or provide that support, even if it’s just on a friendship level. To play with them at school or to be able to have the words to talk with them about it.”

And with publication of The Empty Jar comes “Filling the Jar” – a crowd funding campaign to help children heal from violence. Endorsed by Nazeem Hussain – Australian comedian, actor, radio presenter and creator of SBS comedy show Legally Brown – the InTouch crowd funding campaign aims to raise $20,000 for the development of culturally sensitive therapeutic resources for children experiencing family violence, carrying on from the themes explored in the picture book.

“We want to provide tools to support professionals to listen, validate and guide children and families toward recovery past their experiences of family violence,” Ms Avdibegovic explains.

“It is our sincere hope that by increasing understanding and awareness of family violence and its impact on children from diverse backgrounds, we will improve societal responses to children affected by abuse.”

The ‘Filling the Jar’ campaign will run from 8 October – 19 November 2014, and donations can be made via: http://www.startsomegood.com/fillthejar

Danielle Binks is a regular columnist for Kill Your Darlings literary journal, and a book reviewer on her personal blog Alpha Reader. You can Tweet her: @danielle_binks

Shares
Comments Off on Filling the Jar: Helping Children Heal From Family Violence