Day and night, every day of the year, the world’s oceans are being traversed by container ships. These ships are responsible for delivering us over 90 per cent of what we use and consume – our foodstuffs, our clothes, our white goods and flat-screen TVs. These vessels are staffed by over 1.2 million seafarers worldwide, of which the Maritime Union of Australia estimates that over half experience some form of exploitation at the hands of ship owners and shipping agents.

Mindful consumers in Australia are increasingly aware of the idea of fair trade, and many make a concerted effort to direct their spending towards ethical products and companies. But the transport of these goods is a blind spot in consumer awareness. Few of us consider how our goods reach the shelves, let alone give thought to the individuals who work to get them there. The lives of seafaring men and women are invisible.

It is invisible stories such as these that are the primary focus of Australian arts and social innovation company Big hART, which for the past 24 years has run long-term arts projects with communities whose voices struggle to be heard. In 2013, Big hART began the Blue Angel Project, which reveals, acknowledges and celebrates the lives of contemporary seafarers. It seeks out and encourages best practice within the maritime industry, engaging traditionally adversarial stakeholders in an effort to secure a better future for the world’s workers of the sea.

The project’s emergence has been timely. ABC’s Four Corners recently featured an episode on the “Ship of Death”– shedding light on a series of incidents on board the Sage Sagittarius, a 2012 voyage during which three crew members lost their lives in suspicious circumstances, two of these right on Australia’s doorstep. Subsequent investigations unveiled a host of unacceptable conditions under which the crew lived, working a job in which there can be hundreds of days between one “shift” and the next. As Four Corners stated – “these are the sailors we rely on to carry out the trade that underpins our national wealth.”

Seafarers have a one in 11 chance of being injured or killed on their tour of duty, a far more alarming figure even compared to other “high risk” occupations. Mental health issues are rife. Bullying and abuse is inescapable and seafarers experience profound loneliness as well as disconnect from their families and communities at home, often missing the birth of a child, death of a loved one, or other significant life event or tragedy. In these instances they feel trapped and helpless. Even ships registered under the flag of reputable shipping nations such as Britain suffer high percentages of injury and deaths as a result of accidents, suicide and homicide. 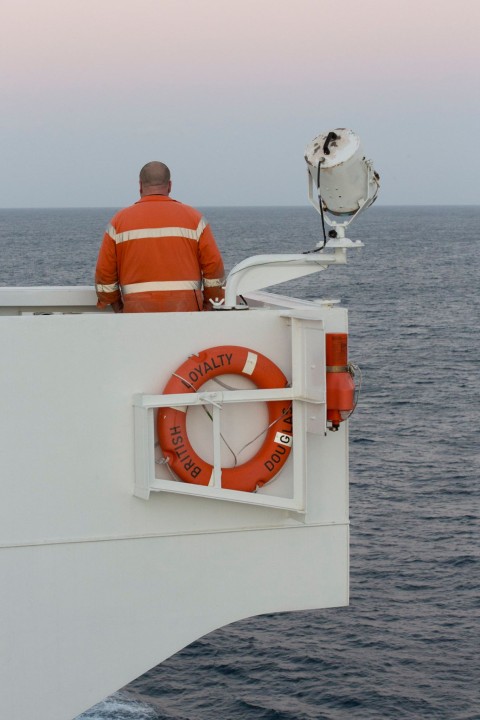 The Blue Angel Project hopes to demonstrate that these sobering realities are global issues, with much of the industry’s workforce hailing from the Philippines, India, Ukraine, Croatia and China. Crews are often comprised of multiple countries of origin, and individuals may struggle to communicate with one another, or understand cultural differences.

In Australian waters, authorities are hard pressed to maintain Australian standards on international ships frequently working under a practice called “flags of convenience”. These are vessels operating under the flag – and therefore regulations – of a country other than the one by which it is owned, leaving them open to take advantage of potentially cheaper international labour forces.

Earlier this month it was announced that the Australian crew of fuel taker British Loyalty would be made redundant, with an international crew taking their place. Battling poverty and with families to provide for, some internationals work for as little as $2 AUD an hour, in conditions akin to modern slavery. For these desperate individuals it is guaranteed work, not working conditions, that is most important. Australian seafarers work for what we as a nation consider fair conditions, but they are being pushed out of the market, unable to compete in the “race to the bottom”.

“Imagine if fair shipping became as recognised as fair trade?
Imagine if we asked at the checkout, ‘Was this fairly shipped?'”

In a sometimes faceless industry such as this, it is important to seek out the humanity within the industry, giving the seafaring community faces, voices and a platform to be heard. These are ordinary people whose lives are some of the most extraordinary; filled with tales of adventure, solidarity, danger, love, loneliness, laughter, sex, death, and the urgency of exploitation.

Big hART is using extensive interviews and consultation with current and former maritime workers and industry insiders internationally to inform the creation of theatre, exhibitions, short film and documentaries to convey the seafaring experience. These outcomes are showcased in both arts and non-arts platforms. A short film has been commissioned by the UN’s International Maritime Organisation, and Blue Angel recently premiered its theatre work as part of the Tasmanian International Arts Festival. The telling of these stories creates a vehicle for awareness, empathy, and the desire to create change in the industry.

As the shipping industry is one from which we all benefit, it is important that as a population we make the connection between our influence as consumers and our ability to improve the situation for vulnerable workers by increasing awareness and demanding best practice. Imagine if fair shipping became as recognised as fair trade? Imagine if we asked at the checkout, “Was this fairly shipped?” After all, a rising tide lifts all boats.

Yolande Norris is Media and Online Producer at Big hART. The International Maritime Organisation will be screening a short film from Big hART’s Blue Angel project for International Day of the Seafarer on Thursday 25 June.