By Katherine Grant. This article is part of our August theme, which focuses on the environment and human rights. Read more articles on this theme.

Australia has long prided itself on its oceans; images of pristine beaches with white sand, clear water and tropical reefs have become iconic representations of life down-under around the globe.

Despite the affection Australians hold for their coastline, it has not always been sufficiently protected from harm, with over-fishing, pollution and climate change playing havoc with our marine life.

From the tropical waters up north, to the sub-Antarctic condition in the south, Australia’s oceans are filled with unique and diverse marine life. As the nation’s maritime jurisdiction is larger than the continent itself, protecting our marine life has become an environmental imperative.

As environmental issues continue to grow in the public consciousness the protection of the natural world and human rights are becoming increasingly linked. With global warming a hot button political issue around the globe, it is largely accepted that the environment has an immense influence on humanity, and vice versa. It is no longer possible to defend one while ignoring the other.

In recent months, the government has announced plans to expand the nation’s marine reserves, creating the largest network of this kind in the world.

Under this scheme the number of marine reserves will be increased from 27 to 60, effectively covering one-third of Commonwealth waters with a total area of 3.1 million square kilometres.

The reserves will cover much of the Coral Sea region in Queensland, as well as much of the East coast. Areas of Western Australia and the Northern Territory will also be protected for the first time.

When announcing the expansion, Environment Minister Tony Burke said the reserves ensured “Australia can lead the world in marine protection.”

“The maps I have released today are [the] most comprehensive network of marine protected areas in the world and represent the largest addition to the conservation estate in Australia’s history,” he said.

The Margiris … has a history of devastating ecosystems and collapsing fisheries.

“This new network of marine reserves will help ensure that Australia’s diverse marine environment, and the life it supports, remain healthy, productive and resilient for future generations,” he said.

These reserves are dedicated to protecting and maintaining “biological diversity and … natural and associated cultural resources.”

The oceans surrounding Australia are among the most biodiverse in the world, with scientists estimating that around 80 per cent of marine species in Southern waters are unique to this region.

As such, pressure is increasing to ensure that these creatures, and their environment, are safeguarded in the future.

These reserves not only promote sustainability in fishing and tourism, but also protect against introduced pests and pollution that threaten the vitality of marine life.

This is achieved through not only the restriction of obvious threats to the ocean’s future such as oil drilling, but also the use of no-take zones where fishing is entirely prohibited.

Steps will also be taken to ensure that the expansion of marine reserves does not negatively impact on the fishing industry or the economy. A $100 million assistance package was simultaneously announced to assist affected individuals through the transition.

This includes not only investments in research, but payments to support necessary changes to businesses.

“Those impacted who want to change where they fish, how they fish, and what they fish, will be helped to do so,” said Agriculture Minister Joe Ludwig.

With “no-take” zones stretching along the East coast, trawling strictly limited, and mineral exploitation entirely banned in the Coral Sea, it is unsurprising many environmental groups have been highly supportive of the expansion, and what it represents – moving forward.

The Australian Marine Conservation Society (AMCS) said in a statement the plan represented a “necessary and significant step towards protecting our oceans.”

The AMCS described the move as a historic landmark in Australia’s environmental protection, praising the combination of science and public consultation that allowed the plans to be realised.

However, while these expansions have been met with warm welcomes from many environmental groups, there have also been calls that they do not go far enough to protect the oceans and marine life from exploitation.

Greenpeace for one has said that while the reserves represent a great step forward for Australia’s marine life, they have “fallen short” in some areas.

While oil drilling, trawling and mining exploration have been restricted and will be stringently monitored, some areas along the West coast are still allowing these activities to take place.

Perhaps the most concerning development since the announcement of the expansion of Australia’s marine reserves is the news that the FV Margiris super-trawler will be allowed to fish in Australian waters. This has become a source of concern for many groups, as it seemingly contradicts much of what the marine reserves are intended to protect. 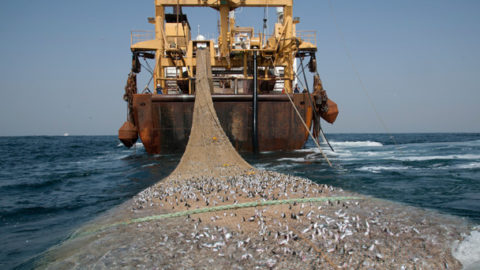 The trawler has been granted an 18,000 tonne annual quota for jack mackerel and red bait, which has drawn strong criticism and serious concerns about its sustainability.

The Margiris, currently en route to Tasmania from West Africa, has a history of devastating ecosystems and collapsing fisheries.

Groups including the AMCS, Greenpeace and World Wildlife Foundation have joined together in an attempt to prevent the trawler from beginning its Australian campaign.

Central to their argument is the potential havoc the trawler is set to wreak in our oceans, so soon after steps towards the prevention of such trawlers were announced.

Fears abound that the localised depletion of the targeted baitfish will have a flow on effect to other marine life, including dolphins, seals and larger fish, with no strategy in place to handle this issue.

“The Margiris poses an unacceptable threat to our marine wildlife, which are supposed to be protected under Australian law,” said AMCS representative Tooni Mahto.

Coming so soon after the announcement of the expanded marine areas, the Margiris, along with the risks it poses to sustainable fishing, puts not only the goodwill established by the expansion at risk, but raises questions as to how deep the commitment to our oceans really goes.

Katherine Grant is a Melbourne based writer, currently completing her Masters of International Relations, majoring in Human Rights and International Law.

Shares
Comments Off on Expanding Marine Protection in Australia