This article is part of our July 2014 issue, Human Rights and Health.

There has been renewed interest in Burma of late.  In 2012, Australia lifted its targeted travel and financial sanctions on the country; in 2013, we hosted visits from Burma’s President Thein Sein and opposition leader Aung San Suu Kyi and, earlier this year, re-established a resident Defence Attaché in the Burmese capital.  President Thein Sein has been complemented by the likes of Barack Obama and former Australian Prime Minister Julia Gillard for the ”extraordinary” progress he has made in moving Burma “down a path of both political and economic reform.”

Australia, it seems, is keen to be involved.  The 2014/2015 Budget Estimate proposed a $90 million aid contribution focusing on, among other things, improving access to health care in Burma.

The expulsion of Médecins Sans Frontières (Doctors without Borders) from Rakhine state in western Burma suggests, however, that Burma is a long way still from the universal recognition of human rights for all ethnic groups that live within Burma’s borders, particularly the Rohingya people of Rakhine state.

This raises the question: should Australia call Burma out on decisions like this, which jeopardise the healthcare of hundreds and thousands of people?  Or should Australia play the less critical role of a supportive observer while Burma struggles down the long and winding road towards democracy? 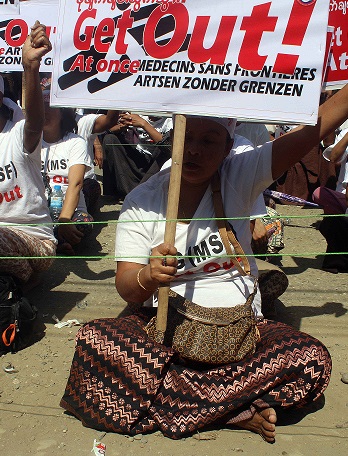 A protest against Doctors Without Borders in Sittwe, Rakhine state – AFP

The location of the camps, the inability to obtain citizenship and local regulations make it almost impossible for Rohingya people to access state-run medical clinics.

The Burmese government says it ousted Doctors without Borders because the organisation was favouring Rohingya Muslims over Rakhine Buddhists.  Doctors without Borders deny this.  It has been widely reported that the real reason the organisation was expelled was because they provided treatment to Rohingya people after the massacre of a number of Rohingya people by Rakhine Buddhists in January this year.  The Burmese government deny that any deaths occurred.

On the right side of the road?

The Australian government did not comment on the forced withdrawal of Doctors without Borders, despite the fact that the organisation was the main provider of reproductive healthcare and treatment for HIV/AIDS, tuberculosis and malaria in the region.

After the expulsion of Doctors without Borders, unrelated outbreaks of violence targeted the offices of, and homes of staff working at, the United Nations and other international NGOs.  These attacks had the flow-on effect of restricting the operations of those organisations, a number of which provided health care and related services, with almost all non-essential personnel evacuated from the region.

While the Australian and American governments expressed ”deep concern” about the violence and its flow-on effects, little has been done to address the unfolding medical crisis, with Rohingya people left with next to no access to any form of health care.

It has been suggested by the United Nations Special Rapporteur on human rights in Burma, Tomás Ojea Quintana, that ”the pattern of widespread and systematic human rights violations in Rakhine State may constitute crimes against humanity”.  It could even be said that the Burmese government’s refusal to provide, and decision to actively prevent NGOs from providing, health care services to the Rohingya people could be characterised as a form of ”slow burning genocide” within the meaning of the Convention on the Prevention and Punishment of the Crime of Genocide, by virtue of imposing conditions of life calculated to bring about the Rohingya people’s destruction.

As a country with renewed interest in Burma, and as a current member of the United Nations Security Council, Australia should hold Burma accountable for its treatment of the Rohingya people.  As Elaine Pearson, Australian Director of Human Rights Watch, has pointed out:

…what counts most is sustained public pressure that raises the costs of human rights violations.  Abusive governments will often be forced to think twice about committing abuses when international actors raise concerns with public statements or by documenting state responsibility for violations.

The Australian government should therefore be placing sustained, public pressure on the Burmese government to allow Doctors without Borders (and other NGOs) back into Rakhine state.  Further, the Australian government should hold the Burmese government responsible for the safety of staff working for those organisations.  Such pressure could be the first, small step towards ensuring the survival of the Rohingya people and, potentially, the recognition of basic human rights for the Rohingya people living in Burma.  It could also help nudge Burma a little further down the road towards democracy, ahead of the country’s elections scheduled for 2015.

Monique Hurley is a Melbourne lawyer.  She has volunteered with the Homeless Persons’ Legal Clinic and interned with Justice Connect and the Castan Centre for Human Rights Law.

Shares
Comments Off on Doctors beyond our borders – Is Australia turning a blind eye to human rights abuses in Burma?