On 9 November 2015, Australia suffered its second Universal Periodic Review (UPR) in Geneva before the United Nations Human Rights Council (UNHRC). I attended as a representative of Australian Lawyers for Human Rights (ALHR) who had contributed to the Joint NGO Coalition UPR submission.

The UPR is an innovative reformation of the United Nations (UN) human rights system. Akin to a “World Cup of Human Rights”, each of the 193 UN Member Countries are brought before their peers once every four and a half years to be challenged on their human rights records and related progress, or lack thereof. Australia’s second review came over four and a half years after the first UPR on 27 January 2011.

Fifty-three peer states attended Australia’s first UPR to interrogate its human rights record. They made 145 recommendations to improve Australia’s adherence to its International Human Rights Law (IHRL) obligations. These are contained in the Final Report of the UPR Working Group and focused on: the (mis)treatment of Indigenous peoples, asylum seekers and migrants, people with disabilities, and women and children; the ratification of OPCAT, the Optional Protocol on the Convention Against Torture, and the International Convention on Migrant Workers (ICMW); and the implementation of a federal human rights Act as a means of meeting Australia’s many outstanding human rights obligations.

In its formal response, Australia accepted 90 per cent of the 145 recommendations. However, to date only about 11 per cent of those have been fully implemented despite the ongoing concerns of many NGOs.

The Australian Human Rights Commission (AHRC) has helpfully produced a number of independent Annual Progress Reports to monitor the implementation of recommendations made at each UPR.

In 2015, 110 countries showed up to scrutinise Australia’s human rights record. Australia had the fifth most peer state interventions during the UPR’s second cycle – perhaps a telling sign of the rising tide of international concern. Each peer state was apportioned 65 seconds to speak. The Draft Report now tabled before the UNHRC recordsthat Australia received 290 recommendations (exactly double our first) from the peer State reviewers.

The overwhelmingly common themes of concern were the (mis)treatment of asylum seekers, Indigenous peoples, and people with disabilities. There was continued concern as to why Australia had failed to: ratify OPCAT and the ICMW; take more substantive action to mitigate climate change; and implement a National Action Plan for business & human rights. Similarly, there was concern about why Australia, despite ongoing calls to do so, remains bereft of federal human rights legislation.

From my perspective as an NGO-observer representative, the performance of the formal Australian delegation appeared very organised and slick, but to the point of appearing disingenuous and contrived. The Australian Government’s National Report, aside from its odd lack of a formal letterhead, also raised many questions about the government’s skewed view of its own progress. This is why it is so crucial to have the involvement of civil society through the AHRC and the Joint NGO coalition to keep the process accountable.

I attended the review of Austria the same morning as Australia and, by way of contrast, there appeared to be a genuine dialogic interaction between peer states and the Austrian delegation (where the topic of highest concern was also asylum seekers). As with many countries, the delegation of Austria was headed by the Federal Minister of Justice, Mr. Wolfgang Brandstetter (the Austrian equivalent of the Hon. George Brandis). Australia did not send a Minister in the official delegation. It seemed strange that neither Bishop nor Brandis were in attendance given their recent advocating for candidacy for the UNHRC.

However, Bishop’s and Brandis’ electioneering sales pitch for UNHRC and UNSC candidacy was laboured and put quite unsubtly by the Australian delegation on a few occasions, when articulating their “Five Pillars” for promoting our UN candidacy.

Needless to say, while each of these pillars is interesting, Australia’s own house is hardly in a position to be preaching to others. In a blink one only needs to think of: the national domestic violence crisis; worsening gender pay inequity; the lack of a federal bill of rights and/or human rights Act; the corrupt conduct being investigated by bodies such as the Independent Commission Against Corruption in New South Wales and the Crime and Corruption Commission Queensland; usurpation of the rule of law by the legislature in many areas including immigration, counter-terrorism, national security and environmental protection; the toxic mass-mistreatment of mentally ill Indigenous people being warehoused in prison; escalating Aboriginal deaths in custody and disproportionate incarceration rates; and of course, the defunding of the AHRC.

Most concerning as an independent observer was the performance by the Australian delegation effectively stating that the international community has no cause for concern about Australia’s treatment of asylum seekers because:

Equally cringe-worthy was the delegations’ boasting about taking 12,000 – 18,000 Syrian refugees –in a world where this year’s UNHRC Global Trends Report now identified 59 million refugees and displaced persons in the world, the most since WWII. 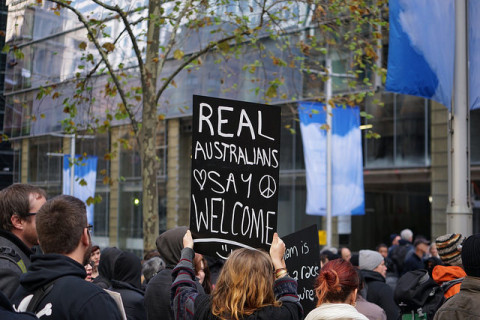 While Minister Dutton dismissed the review as a “farce”, because even states with poor human rights records such as China and North Korea had admonished Australia’s rights recalcitrance, one might instead encourage introspection by our Australian leaders as to how things have backslid so far that such criticisms can be legitimately put by respected states and rogue states alike.

The international community appeared highly unconvinced of the government’s claims and there were numerous reports of upset at the patronising tone in which those misleading claims were delivered.

To its credit, the Australian delegation hosted the Joint NGO coalition at a roundtable the day following the UPR, and there was a further follow-up meeting with the delegation and NGO coalition on 9 December 2015 at the AHRC in Sydney. This shows the government is at least attempting to look genuine in its efforts to engage civil society in the UPR process.

The Australian delegation is due to formally respond to the recommendations in February 2016. At the time of publishing, there has been no response.

Benedict Coyne is a Queensland Convenor and National Committee Member of Australian Lawyers for Human Rights (ALHR). He also chairs the new ALHR national Human Rights Act subcommittee. Benedict recently completed a Master of Studies in International Human Rights Law at the University of Oxford – his dissertation was on Australia’s lack of a bill of rights/human rights act in the context of the UPR. You can find his LinkedIn profile here.