Polish journalist Ryszard Kapuściński spent his life immersed in human conflicts all over the world. Reflecting upon decades of observation, he concluded that the Self is not a solitary individual – its composition includes the Other.

In simple terms we use the concept of “Other” to distinguish between ourselves and those of different traits – such as nationality, religion, gender, or ethnicity. Since the Howard era, collective Australia, “public Australia”, has been obsessed with negative perceptions of the Other and in doing so has damaged the Australian Self.

Heading toward the 2001 federal election and fearing defeat, Prime Minister John Howard embedded a strong concept of the Other into our public language with the now infamous words: “We will decide who comes to this country and the circumstances in which they come.” We heard the clear implication that “boat people” (they) are not like us. The Other was demonised with parroted lies about children being tossed overboard by “the kind of people we don’t want in Australia.”

At least since the time of Plato, it has been understood that for politicians it is easier to pander to our inherent vices than to harness our virtues. It is also well known that when fear increases, society becomes more conservative. Howard’s deceit helped him to election victory and since then, Australian politicians know when things get desperate (and politics is always desperate) elections can be swayed by spreading fear and illusion about the Other.

The Liberals and Labor are increasingly prone to promoting an “us and them” tribal society for political advantage. Tribalism, says sociologist Richard Sennett, “couples solidarity with others like yourself to aggression against those who differ.” Nationalism, like that which destroyed Europe for half a century, or which fuels Reclaim Australia, or which spawned Abbott’s Team Australia, is the classic form of tribalism politicians create when they seek to provoke or divide.

Nationalism stops us looking honestly at ourselves. We turn to it, at least in part, to dismiss eyes that might look at us and see through the masks we wear; masks we might call “egalitarianism” or “a fair go”. Kapuściński points out that as early as the writing of Herodotus, xenophobia was described as “a sickness of people who are terrified by the prospect of seeing themselves in the mirror of the culture of others.”

Richard Sennett, in Together, explores the sociological effects of contempt for the Other, explaining that the desire to neutralise difference within society comes from anxiety about the unfamiliar, but to force human complexity into a single cultural mould is politically regressive and tells a lie about ourselves. He describes the “Self” as a composite of sentiments, affiliations and behaviours that seldom fit neatly together and suggests any call for tribal unity will degrade the individual. One result, “is to weaken the impulse to co-operate with those who remain intractably Other” – the very thing Abbott was supposedly tackling with Team Australia.

“We can easily avoid any true connection with anything we deem ‘Other’ whilst bingeing on anything we consider ‘Self’. We can avoid empathy, because empathy requires looking through the Other’s eyes.
We can dehumanise, as the Other becomes alien.”

Culture forms through interaction with others, which makes the quality of these relationships so critical to the future of a community or nation. Their erosion through mistrust, conflict and intolerance of difference damages our shared culture and all the comfort, support, resilience and joy a strong inclusive culture offers its people.

Multicultural society requires a particularly mature sense of cultural identity. It doesn’t require the kind of “mass culture” or anonymous crowd inherent in Team Australia. It obliges us to uphold the values we espouse as individuals when we are thinking or acting as a collective.

Turnbull is undoubtedly more mature and less divisive than Abbott, but as leader of the same tribe, how much will things change? Both major parties have become so entrenched in the myths they have created – about the need for cruelty towards asylum seekers for example – that changing direction would be akin to admitting to years of spin, deceit and fear-mongering. 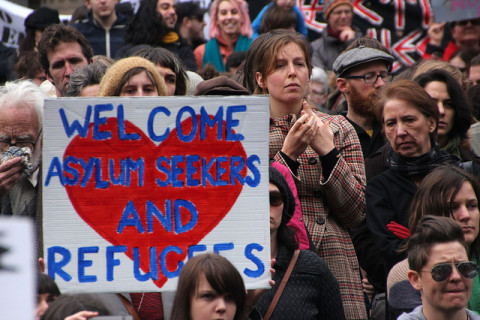 In parallel with the hardening of Australian hearts since Howard’s reign, new media has been evolving to sanction greater distance between the Self and the Other. Hugh Mackay claims that every new development in communication media seemingly brings us closer together, yet simultaneously makes it easier to stay apart. We now have so much choice that we can choose to absorb only media that reinforces our existing beliefs and prejudices; we are in fact encouraged to do so. We can personalise our news stream and receive our news only through sites that we have Liked or Followed. We can easily avoid any true connection with anything we deem “Other” whilst bingeing on anything we consider “Self”. We can avoid empathy, because empathy requires looking through the Other’s eyes. We can dehumanise, as the Other becomes alien.

Mackay also claims that the “way we respond to people who are unlike us is the best test of our moral integrity.” This is witnessed in the most honourable and the most shameful moments in human history. We teach our children the noble human values of tolerance of difference, patience, compassion, kindness and respect, and most of us apply them pretty well at an individual and direct level. Why then, is it okay to suppress these values as a collective, as a nation?

He thought of how the world organises its affairs so that civilisation every day commits crimes for which any individual would be imprisoned for life. And how people accept this either by ignoring it and calling it current affairs or wars, or by making a space that has nothing to do with civilisation and calling that space their private life. Richard Flanagan, The Road to the Deep North.

Another day of “current affairs” passes – another day of innocent people detained, languishing in our name. Words always on hand to reinforce our blindness to the suffering of Others or to fabricate images of “them” that justify our brutality. Our real choice becomes one between blindness and hallucination, consummated by an unhealthy certainty within either delusion.

Meanwhile, as one of the world’s most wealthy and sparsely populated countries, Australia has one of the developed world’s toughest approaches to asylum seekers; and it is Tony Abbott – trying desperately to counterfeit a legacy from his abysmal prime ministership – telling European countries to close their borders and turn the despairing away. As the Others of the world stare up at us standing proudly on an ornate pedestal of insular myths, it is inevitably us who become the Other.

And so we return to Kapuściński’s other dimension of the Self, the Other. If he was right, then Australians should beware that as we poison the Other, we poison the Self, and the symptoms may be more subtle and more damaging to our national character than some misguided bouts of nationalism. At best, we’ll achieve a form of collective “imbecilisation”; at worst, we’ll re-define ourselves as cruel, selfish, and even self-loathing.

Before we wake up one day, not the people we thought we were, it would serve Australia well to shift the balance of our concern from how we perceive the Other to how the Other might perceive us.

James Dryburgh writes provocative essays about important things. His first book is Essays from Near and Far (Walleah Press, 2014) available from his website Jamesdryburgh.com

Shares
Comments Off on Australia: Becoming the “Other”