“Sport speaks to people in a language they can understand.”

These are Nelson Mandela’s famous words spoken during his speech for World Refugee Day in 2006, describing his ambitions to help unite and rebuild post-apartheid South Africa through social inclusion.

Sport transcends boundaries and provides opportunities for all human beings regardless of race, colour, religion, age, physical ability, circumstance or economic background, to connect with each other and the world around them. Sporting programs can be one-to-one, held in a group, structured with rules and set outcomes or take on a freestyle approach.

Often, sport is used to achieve success through competition, financial gain or personal achievement; yet, perhaps the biggest benefit from sport is that it promotes social inclusion amongst the disadvantaged. The Australian Institute of Health and Welfare recently reported that participation in sports was shown to increase social inclusion as well as decrease social exclusion.

Sporting programs provide vulnerable and at risk people with a place to go to which is not only physically safe from conflict around them, but also emotionally safe. The programs can also provide a welcome relief from daily struggle. For people who have been displaced, who become disaffected or simply disengaged from their community, belonging to an ongoing sporting program or team can be a lifeline, especially during times of chaos where routine and stability are desperately needed yet hard to find.

There are many benefits of using sport with multicultural groups, in particular recently arrived migrants who face disadvantage on a significant scale, to promote social inclusion within their new community.

Structured sporting programs allow for participants to experience consistency, as well as to build trusting relationships with the support workers. Team sport creates a landscape for participants and support workers to explore specific topics or areas of concern within clearly defined boundaries. For example, sport and recreation:

“can be used to explore real life issues and challenges, particularly as they relate to the dislocation and tensions inherent in the settlement process. Often viewed as a microcosm of life, the sporting field provides an environment whereby actions and consequences can be explored.”

Structured sporting programs can bring together people from different language groups and backgrounds by using activities with a common goal. These instructions can be demonstrated to participants using actions and hand gestures, with a limited reliance on vocabulary, and, as a result, allow for greater participation for otherwise isolated or disengaged recently arrived groups of people.

Not only does sport provide direct benefits to the participants, but the group members themselves also provide opportunities for social inclusion, friendship and connection to others. As the Centre for Multicultural Youth has pointed out, “Sport and recreation represents a practical and accessible entry point for addressing the needs of young people from refugee and migrant backgrounds and providing links between and within communities.”

The Australian Football League (AFL) run some very successful multicultural programs which have grown in size and opportunities. They now offer ongoing football programs at the local level as well as one-off programs, such as the multicultural cups. The AFL has realised the potential for talent and skill amongst this group of people and is now actively supporting player development and recruitment through these multicultural programs, and some of these recruits are now playing at the elite level of AFL and making a good career from it. These players are seen as role models for kids from migrant backgrounds and take on a cult hero-like status within local populations. The AFL is leading the way in promoting racial tolerance and acceptance through sport, and other sporting codes in Australia are now replicating this model with good results.

Studies show that approximately one-third of the Indigenous population participates in some form of sporting activity (ABS 2010), thereby showing the popularity and general reach of sports for the Indigenous population.  In Australia, Indigenous people are a significantly disadvantaged group: they are over-represented in the prison population, have a shorter life expectancy than non-Indigenous Australians and have lower than average university attendance rates. Therefore, there is real potential for sport to change an Indigenous person’s life for the better, as sporting programs not only provide an opportunity to address the disadvantage that many Indigenous people face, but they can also act as a pathway to achieving success in the sporting arena.

As already mentioned, structured sports allow the participants to connect with support workers, each other and the world around them, which for Indigenous communities (who are often in the minority in urban areas and face a variety of risk factors) can provide an opportunity for improved social inclusion in the broader community.

In remote Indigenous communities, where infrastructure and funding for long-term projects to address systemic disadvantage and risk factors are often unreliable, inconsistent and inappropriate, structured sporting programs can provide a real benefit to participants and their communities. As the Australian Institutes of Health and Welfare and Family Studies recently pointed out, “The evidence suggests that providing locally relevant sports and recreation programs can be useful in building a sense of purpose, hope and belonging in these communities.”

For many young Indigenous people who have experienced dysfunctional family structure or little support from others, team sports provide a safe space to learn about the world around them as well as developing coping mechanisms. When young people experience trauma and a disrupted upbringing, they often haven’t had the chance to play and develop boundaries which are so important in the formative years of a person’s life, so the opportunity to play with your peers in a team significantly enhances their ability to become self-empowered as well as to develop resilience for the future.

One example of sport promoting peace and social inclusion is Footys4All, a Australian non-profit organisation which donates sport balls to disadvantaged people and groups of people. On a recent trip to India, Footys4All distributed free tennis balls to children with a disability living in a rural village. One of the volunteers explained how disability is not well understood or accepted in this area, and that as a result people who have  disability in this village are often ignored and vilified. However, the transformation once the tennis balls were handed out was obvious, according to a volunteer: “within half an hour the other kids from the village had turned up and were integrating and engaged with the special needs kids.” It was an amazing example of the power of sport to bring people together. 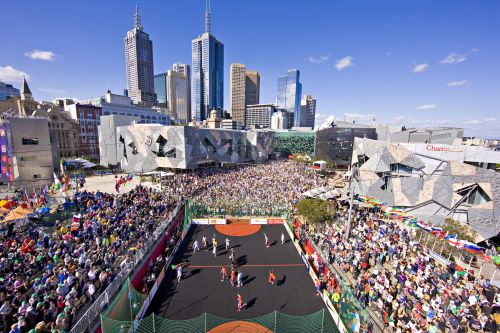 Another example is the Homeless World Cup, which is an annual international tournament of modified soccer. The participants identify as homeless and are sponsored by a welfare support organisation which maintains ongoing support throughout the year. One of the reasons this initiative is so successful is that it takes the “face” of homelessness into the mainstream. The tournament is held in the city centre so people on their lunch break can stop and enjoy watching some soccer.

Additional benefits to the participants themselves include the friendships made, being able to connect with a support organisation, staying fit and ultimately belonging to a program which is beneficial in so many ways. As The Big Issue Australia, which organises the program in Australia, explains: “Street Soccer promotes social inclusion and personal change for participants by providing support and promoting participation, inclusiveness, commitment and team spirit.”

The Universal Declaration of Human Rights (Article 24) recognises the “right to rest and leisure”. The UN has released a comprehensive study into the role of sport during times of war and conflict in which they have found that team sports helps provide a safe alternative for vulnerable people who are at risk of predators and criminal gangs looking to exploit the socially excluded.

More generally, when sports programs are structured, work within the needs of the relevant group, provide rules, boundaries and are ongoing, then the results will build cohesion and promote social inclusion for the participants of the programs as well as the wider community through the flow on effects.

Team sport in its very nature aims to promote participation. When sport is understood and applied in this way, social inclusion amongst the disadvantaged populations is a natural outcome as well as an easily measurable unit of success.

Using sport to speak to people in a language they can understand means the possibilities of connection are endless.

Justine Curatolo is an AFL Multi-Cultural Ambassador, coaches U 10s local football and team manages for the U 18s. Justine promotes social inclusion through sport in her many different volunteer roles.