Growing up in Canberra immersed in the local punk scene, Australian artist and activist Bernie Slater grew up making zines and comics, “The DIY approach to culture and media in punk really appealed to my interests in social justice and democracy.”

Majoring in Print Media and Drawing at Canberra School of Art at ANU, Slater continued to explore how art can leap outside the gallery space, and leak into media and social commentary through posters, leaflets, street art and ephemera, “I liked the democratic nature of being able to produce multiple works that might go beyond a gallery setting.”

Recently, Slater spoke to Right Now about how his recent work, Practical Sociopathy Kit, and how it aims to raise awareness on human rights issues through the satirical examination of the Liberal government.

Right Now: How did you come up with the idea for Practical Sociopathy Kit?

Bernie Slater: I was really concerned with the lack of empathy coming from the Federal Government. The 2014 budget really hit some of the most vulnerable people in our society, with the government showing no regard for the human impact of the cut-backs. To me, the policies are quite sociopathic.

How does satire and exaggeration help to portray messages in your work?

Exaggeration can often be a really effective way to draw attention to important concepts, so I thought I’d ham it up a bit by making a kit that encourages you to develop sociopathic tendencies in order to be more like the federal government.

The kit asks you to aggressively crunch up lots of little paper figures, lock them up for a while in a little paper fence, then put them in a little paper boat and send them in to Scott Morrison. The kit says that he’ll then send you an official “Practical Sociopathy” certificate, but of course I can’t promise that it will actually happen!

How does Practical Sociopathy Kit reflect your views on asylum seekers?

I think the kit highlights the lack of empathy in the whole debate.  The government’s policy disappoints me, but so too does the ongoing media debate and public discourse. I find some of the dismissive, prejudiced, misguided and callous views of the Australian population to be really disheartening.

What other political messages do you hope to convey through your work?

This particular work also addresses our love of convenience.  The kit is packaged in a nice little box with text that says “It’s easy!” I think we feel better about tough decisions when they’re packaged up nicely for us.  My other artworks address a pretty broad range of social and political issues. I’ve made a lot of work about war, poverty, inequality and apathy but the topics in my work tend to change with the news cycle.

There’s an element of humour running through Practical Sociopathy Kit – from the video tutorial and satirical kit, to sending paper orange lifeboats full of crushed figures in to Scott Morrison.

How do you see the role of humour in politically engaged artwork?

Yelling and screaming your views at people can be really off putting for most people, or makes them defensive. But humour can have an important disarming effect. It’s a cheeky way to start talking about a very serious topic. It starts out silly, but has a sting in the tail.  Richard King recently wrote a really interesting book “On Offence” in which he analyses how we are so quick to take offence at anything that might contradict with our views, and then use the offence as self-righteous political capital. I’d like to think that humour can side step the defensiveness, so that we’re not taking ourselves so seriously, but taking the issue seriously.

Has there been any response from Scott Morrison or the Liberal party?

No response just yet, but less than 100 have gone out so far. I’m planning a public giveaway of the kits soon in Canberra, so hopefully there will be a few more paper boats sailing into the Minister’s office after that.

Practical Sociopathy Kit is not the first time you work has incorporated an unorthodox mail out component to your work – you also explored this with your work Stuff Catalogue. What kind of response do you hope to achieve through these kind of public art projects?

I’m really fond of the classic trickster trope of the wolf in sheep’s clothing, or the Trojan Horse technique. With the Stuff Catalogue, I delivered 20,000 satirical catalogues to Canberra letterboxes that on the outside looked similar to a Woolies or Coles catalogue, but as you got deeper in, it became more apparent that it was a critique dealing with consumerism, desire and sustainability. I also try to make work that goes beyond a traditional gallery setting.  The art crowd isn’t really the target market for a lot of my messages, so I look to use these other kinds of bait – fake products, fake catalogues, weird flyers, and postcards and zines. Whilst I still make works for gallery exhibitions, my main aim is to communicate to a much wider audience. 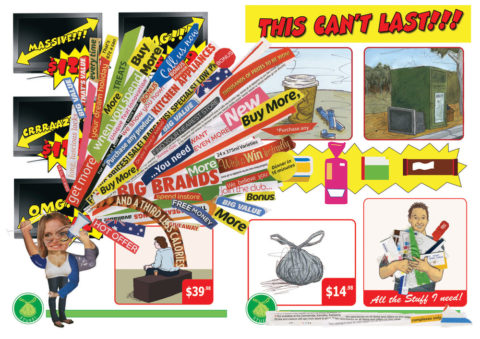 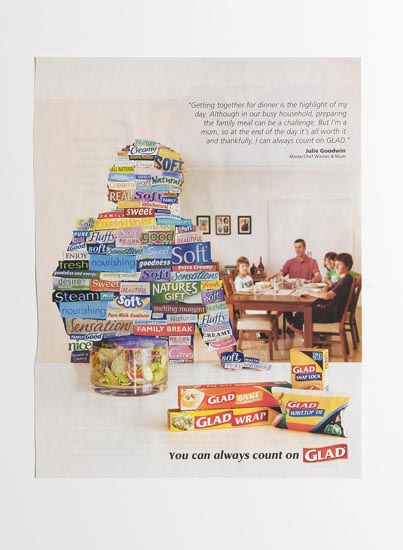 The scope of the Practical Sociopathy Kit seems quite broad. Do you intend to build upon this project or create kits tailored to other political issues in the future?

I’ve been making a few different kits, testing out approaches to various political, social and philosophical ideas. I’m building up towards a fake supermarket project in early 2016.  It’ll be a shopfront for active consumption. Each product asks the user to do something in the real world that might start a conversation or empower the user to make some kind of democratic political expression.