Lisa Caripis is taking Victoria Police to the Victorian Civil and Administrative Tribunal over their refusal to destroy surveillance footage of her taken at a peaceful protest in 2010. The hearing will begin next week on Tuesday, 17 July 2012. Right Now spoke to Lisa about the right to public protest, police surveillance and her feelings about the upcoming hearing.

Tune in tonight to Right Now Radio at 6pm on 3CR (855AM or 3cr.org.au) to hear Lisa speak more about the case.

[RN] You were attending a protest at Hazelwood Power Station in October of 2010. Can you tell our readers what the protest was about and why you were there?

[Lisa Caripis] The protest had been organised to coincide with the 350.org Global Day of Climate Action. There were events taking place all over the world – bike repair workshops in San Francisco, school insulating days in London, waste-land-to-veggies-gardening in New Zealand, and solar panel installations in Kenya.

The aim of our protest (well, it was more like a community day out), was to build a solar power plant out the front of one the most polluting power stations in the developed world, Hazelwood power station. We wanted to show that we, as a community concerned about the contribution of power plants like Hazelwood to climate change, were taking the power into our own hands and building renewable energy solutions. The day was meant to be fun and empowering for the people participating. More broadly, the aim was to get media coverage of the day’s activities to show that coal-fired power had lost its social licence.

It was a really nice, sunny day. And quite warm for October. We marched down the road and gathered in front of the fence lining the power station. A stage had been set up and there were bands playing, speeches, food stalls, kids running around and dancing and of course, the grand opening of the solar power plant. In some ways it was a strange sight – all of us gathered together in the gorgeous weather, lounging on the grass under an incredible blue sky. Behind us, the imposing 1960s coal power station with its tall smoke stacks seemed almost out of place. 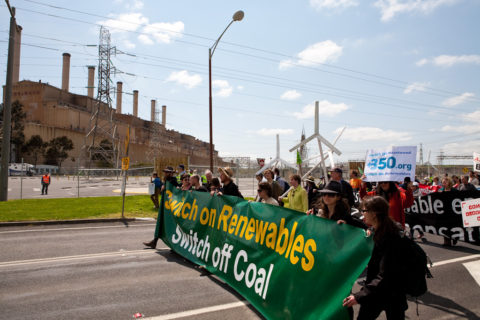 News coverage at the time alluded to possible civil disobedience from attending protesters, and the need to have surveillance of the crowd in order to ensure public safety. From a first-hand perspective are you able to paint a picture of the mood of the protest and comment on any surveillance techniques that you saw used by the Victorian Police?

Throughout the day, a number of police with video cameras overtly filmed us. In particular, I recall seeing police standing still on the side of the road, filming us as we walked past towards the power station. It was quite intimidating, particularly given the overwhelming police presence – there were almost as many police as participants. I remember lots of people commenting on the sheer numbers of police, laughing, somewhat nervously, because it just seemed so over the top. The police were everywhere – in helicopters, on horses, in cars, there were even police from the water squad on the cooling pond!

There had been protests the previous year at Hazelwood where people were arrested. Whether the police presence and surveillance was warranted, is another matter. The organising team had liaised extensively with the police in the lead up to the day to ensure things would run smoothly.

I was proud to be there that day to stand up for something I feel quite strongly about, however, I must admit that I found the experience unsettling. Although I wasn’t quite aware of it at the time, I think my discomfort stemmed from an unconscious sense that what I was doing was wrong – even though I knew we had all the permissions and authorisations we needed to be there. I think that feeling of illegitimacy is natural when you’re surrounded by that many police and you know that you are being filmed. Surveillance can be quite powerful in that way.

It appears that both the Information Privacy Act 2000 and the Victorian Charter of Human Rights is applicable in this situation – what is your understanding of the use and retention of your footage in relation to the legislation?

So, in this case, the key question is: do the police have a purpose for holding on to the footage of me? 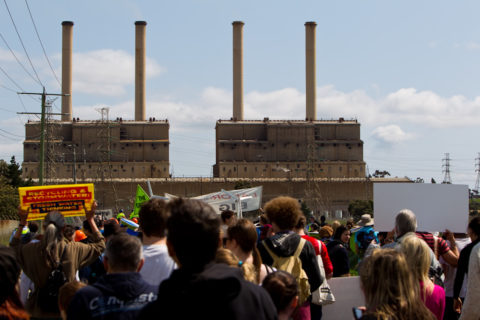 You have brought an application in VCAT that challenges Victoria Police’s collection of footage of the protest. Can you tell us a little more about this application and why you are challenging the use of the footage? Why do you feel that your footage and personal details should be protected?

The complaint is mainly concerned with the argument that Victoria Police took footage of me at a completely peaceful protest, and have since refused to destroy it.

For me, that seems excessive and it’s quite unsettling to know firstly, that they have this footage of me and secondly, that according to this approach, they could collect and hold on to footage of me at other events. I do not know what they will do with the footage from the 2010 protest or what they would do with footage they might collect at other protests, and what the law says they can do with it (that is, what is a legitimate purpose). And that uncertainty itself is unnerving.

This whole issue is quite concerning in light of the news earlier this year revealing the targeting of people in the environment and climate movement for data sharing and intelligence gathering purposes by both state and federal police, ASIO – and private companies through outsourcing arrangements.

The Victorian Police have claimed that footage is able to be retained for a period of 50 years. How does this impact upon the ability of the public to engage in peaceful protests? Will this statement influence the way in which you people interact with issues?

At the heart of this case are the police policies and practices for dealing with footage they take of people at protests and the effect they have.

Does the law consider them unacceptable and unduly interfering with people’s rights? We’ll see.

In Section 16 of the The Victorian Human Rights Charter there is a right to peaceful assembly and freedom of expression. Do you believe that the VCAT application will clarify the position of people’s rights in relation to peaceful protest and freedom of association? How important is this clarification?

We’re lucky in Victoria that human rights are protected to some degree by law, under the Victorian Human Rights Charter. This case will test how well the Charter protects people’s rights to freedom of expression and peaceful assembly – both of which are critical to what we would understand as a “right to protest”(not a formal legal right in and of itself). The Tribunal will have to decide whether the Victoria Police’s retention of certain footage is compatible with these human rights.

This case will test how well the Charter protects people’s rights to freedom of expression and peaceful assembly – both of which are critical to what we would understand as a “right to protest”(not a formal legal right in and of itself).

Without wanting to over-state the significance of the case, the Tribunal’s decision on this point is important for clarifying how well the law protects certain rights we would consider fundamental to a healthy democracy. The finding could potentially also apply to other circumstances, such as surveillance of minority groups.

In seeking clarification from VCAT as to the protective scope of the Victorian Human Rights Charter can you tell us a bit about how an adverse ruling would affect your ability to speak out or take action on issues?

I would be disappointed if the Tribunal considers it legitimate for the police to indefinitely retain footage they have taken of people participating in peaceful protest. I have learnt a lot about this area of law in the 18 months that this matter has been running. I have also spoken to many people who have been shocked to learn that police powers to retain surveillance footage could be so broad. I am of the opinion that a power to indefinitely retain protest footage could possibly deter people from participating in protests in the first place.

… a power to indefinitely retain protest footage could possibly deter people from participating in protests in the first place.

The case will clarify the extent to which the Information Privacy Act limits the practices of police to retain such footage and for what purposes. In this way we will get a sense of how well the law protects the rights of people who have been filmed at protests. This is important. There are so many major social justice and environmental issues that we need to grapple with as a society. More than ever, people must be able to properly engage publicly with these issues. They cannot do this properly if they feel as though they have been labelled a threat, are intimidated or have their privacy interfered with.

The case will give us a sense of what we need to work on to ensure that people can exercise their rights to freely and fully participate in the civic space. For me, that’s what this case is about. 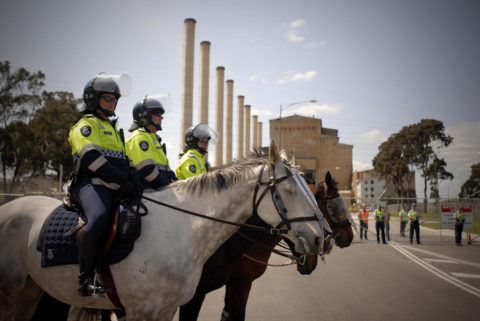