Elaine Pearson is the Australia Director of Human Rights Watch since its opening in August 2013. Right Now’s Ellen Hays spoke to her at the Castan Centre for Human Rights Law’s annual conference, where she was speaking on the consequences of Australia’s border protection policy.

Right Now: What effect is the government’s border protection policy having on Australia’s credibility as a leader in human rights?

Elaine Pearson: I think our border protection policies are very damaging for our local standing in the world. A lot of countries are taking a long hard look at what Australia is doing and thinking: well is there any point in signing up to the Refugee Convention if you’re just going to use opportunities to flout your obligations? So particularly in the region I think that’s of critical concern because many countries in the region haven’t signed up to the Refugee Convention. I would say the particularly damaging things about the policies are obviously offshore processing – the fact that people are being sent to third countries for processing. Offshore processing on its own is not illegal under international law but what makes it problematic is the fact that the two countries that we’re sending people to, Papua New Guinea and Nauru are really not equipped to adjudicate asylum claims quickly and fairly and so people are being held in mandatory, arbitrary detention for long periods of time in quite bad conditions. So if those things weren’t in place, if we were sending people, for instance, to a country like New Zealand, I don’t think we’d necessarily have a problem with it. Sometimes it can make sense to share the burden. It’s the fact that the partners we are choosing are particularly ill-equipped both to process refugees but also there are concerns about their long-term security and whether it’s an appropriate place, particularly in PNG, for people to be able to work and to be integrated into the community.

“Certainly not necessarily everyone who comes to Australia is an asylum seeker but I think there needs to be a fair and just process to determine who should be here, who has the right to protection and who doesn’t.”

I think it’s quite devastating. I think it’s now almost 2000 people who are locked up on Manus Island and Nauru and this is having a physical toll. I mean we know that at least one person was killed in the riots, many more were injured. We know that this is also having huge psychological implications for people who are locked up for long periods of time without knowing what is going to happen to them long-term and I think this is making people make very difficult decisions. Also the fact that the government is offering money – it’s almost like bribing people – to go back to countries like Iraq, like Syria. You’re basically giving incentives to people to return to war zones and I don’t think people should be put in that situation, particularly when Australia is one of the wealthiest countries in the region. We clearly have the capacity to do more and to protect these people’s rights. Certainly not necessarily everyone who comes to Australia is an asylum seeker but I think there needs to be a fair and just process to determine who should be here, who has the right to protection and who doesn’t.

The policies of turning back the boats and detaining asylum seekers offshore are meant to stop people drowning at sea. To what extent is this policy fulfilling our obligation to protect refugees?

I think there are lots of effective ways you could prevent people drowning at sea that don’t require this kind of race to the bottom in terms of cruel measures to deter people from coming to Australia. For instance, you could improve the situation in transit countries. You could work with Indonesia and Malaysia, allow asylum seekers the right to work, the right to kids to go to school while they’re waiting for their applications to be heard. I think for many asylum seekers that actually would be enough. It’s the fact that the detention conditions in those countries are quite unsafe, quite unsanitary, and they don’t have the rights to work. I think that’s the reason why they’d be prepared to take those risks and take those perilous boat journeys. But I think if you actually fix the system in those countries that would go a long way towards deterring people from coming.

Secondly, I think it’s also about addressing the root causes. I mean you look at all the conflict and disasters that are happening around the world today, it’s no wonder that the numbers have been climbing in recent years. This means being a bit more forthright in our foreign policy and addressing the human rights problems of other governments and really taking those governments to task to end those abuses. In the long term I think that will be a much more effective way of addressing the problems from which people are fleeing than simply this band aid measure which ultimately doesn’t stop people’s reasons or need to flee their countries. It just pushes them onto other countries.

“On the positive side Australia has used its seat on the Security Council very effectively as a non-permanent member.”

A challenge the government seems to be facing is how to balance Australia’s economic and political interests with human rights considerations. But are these really at odds with one another?

No, I don’t think they’re at odds at all because ultimately if we want a strong stable prosperous region this also will be best served by countries that protect human rights. It’s not going to be in our best national interest to have countries on our borders or in our region that completely shirk their obligations and that commit atrocities and human rights violations. So that’s actually why it’s really important that when we see situations deteriorating in other countries, whether it’s attacks on religious minorities in Indonesia or torture of people in Sri Lanka, Australia should join with other members of the international community in condemning those violations and calling those governments to account. 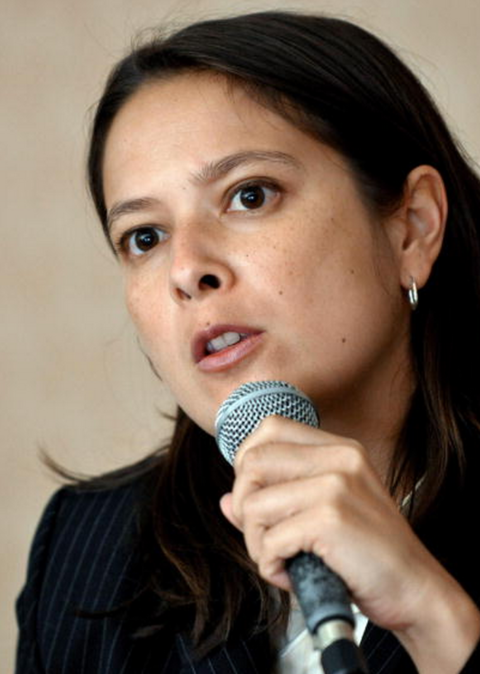 Human Rights Watch’s Australian office will be one year old in August. How has Australia’s human rights performance been over the past year?

On the positive side Australia has used its seat on the Security Council very effectively as a non-permanent member. It’s pushed for humanitarian access in Syria. It’s played quite a leading role in pushing for a Commission of Inquiry in Central Africa so I think Australia should really be commended for the role it’s played particularly in an international forum like the Security Council. However when it comes to other issues, particularly issues in the region, I think there’s been a lot more uneven willingness to address human rights violations. We’ve been particularly concerned about the relationship with Sri Lanka and the willingness to work with the Sri Lankan navy and security forces in returning people to Sri Lanka. This is raises serious concerns about refoulement – forced return of people where there’s a significant likelihood that they could be persecuted. I’m also concerned that while the government has said that they want to focus on more Jakarta less Geneva – so more of a focus on the region – that hasn’t been accompanied by more vocal criticism of human rights. In fact, it’s really been about promoting trade interests and being quite quiet on human rights interests. So I think that’s also been quite disappointing and there’s quite a bit more work that needs to be done by the government.

What is the role of Human Rights Watch in Australia? What has it achieved so far?

We’re a very small office and we are not yet covering domestic issues. There’s a whole plethora of human rights abuses that we could be covering in Australia. At some point I hope that we’ll be able to do that but our focus is really on foreign policy and so in that realm what we’re trying to do is to get Australia to engage more with other countries on human rights issues. We’d like the government to raise those issues in their meetings and not just in the framework of human rights dialogues that it has with counties like Vietnam and China, but also to raise concerns and questions about human rights violations when senior ministers visit. I think there’s been some success, particularly when it comes to countries like Burma where the foreign minister has been quite vocal in raising concerns about the plight of the Rohingya for instance. But I think there’s certainly more work to be done and I think part of that reluctance comes from this perceived necessity to engage with countries on refugee and asylum seeker issues and so that means holding our nose and bearing it when those countries are doing things that are against international standards.

What are the human rights issues that the government should be making a priority in its foreign policy?

It varies from country to country. Our priority has been Sri Lanka and it’s not been about asylum issues per se, it’s been about getting the country to address the war crimes that were committed and have some kind of serious accountability process for those crimes and also the current problems that human rights activists are facing in Sri Lanka – the concerns about torture, detention, particularly of those who are suspected of links to the LTTE and so on. When it comes to Indonesia the issues are very different – it’s about attacks on religious minorities, abuses by the Indonesian military, freedom of expression in places like Papua.

So I would say there’s a whole range of different issues that we work on depending on the country but probably the most strategic ones for us are Indonesia, China, Sri Lanka, Burma, maybe Vietnam and Cambodia. They’re ones where we feel like there’s quite significant interest from Australia in terms of both funding, development aid, strong political interest, strong trade links to some of those countries and so there’s a real leverage that Australia has and it can really do a lot more I think to better promote those issues.

I think coming back to your initial question about where we’ve had the most success, I think it has been quite difficult with this government because of their lack of interest in protecting human rights as part of foreign policy but I think we’ve had success in getting our message out to the Australian public and to the media and I think we’ve played quite an important role in sending a counter-narrative to what the government says about its state of relations with other countries and the state of human rights in other countries, so I think that is actually really important in a democracy like Australia – that we actually build a community and a voice of people who are concerned and committed on these issues. So that’s probably been our biggest achievement so far this year.