RN: Hello, thanks for giving us the opportunity to speak with you today. It would be great if you could run us through some of the main findings of your visits to detention facilities outlined in your report.

[Alex Pagliaro] We went to eight facilities across Australia. Our main finding was that despite the best efforts of many staff, long-term indefinite detention wears people down. There’s no way of avoiding it, after a while the human spirit cannot cope with that much fear, uncertainty and frustration, being locked up indefinitely not knowing what is happening to your family.

…after a while the human spirit cannot cope with that much fear, uncertainty and frustration, being locked up indefinitely not knowing what is happening to your family.

We saw people breaking pretty much and just not being able to cope.

Indefinite detention needs to end. The government needs to look at this policy and ask itself “why?” All we saw was a system that was destroying innocent people, people who are asking us for protection and at the same time costing the Government an amazing amount of money to run these centres in such remote and isolated areas.

Could you tell us a little about the conditions you witnessed inside detention centres during your fact-finding mission?

Each centre we visited was quite different.

The Curtin Detention Centre was very hot and dusty, just donga after donga in this massive dustbowl surrounded by large fences. It is located in the middle of nowhere – two hours north of Broome, and a three-hour flight north of Perth.

This is problematic in terms of providing adequate activities and excursions for detainees. In addition, repairing basic infrastructure at the Centre can take weeks or months. This limits the ability of staff to provide an adequate environment for detainees.

It also limits the ability of detainees to communicate with the outside world through the phone and internet, in particular to communicate with family. This poses problems for detainees in navigating the process of seeking asylum by speaking to their lawyer or immigration agent, or talking to NGOs such as Amnesty. When you get an hour of internet a day and it is so slow it can take 30 minutes to log in, sending an email can be impossible. This adds to the frustration of being locked up but also when there are tight timeframes for review of applications for asylum for example, it can limit their ability to claim refugee status.

Christmas Island Detention Centre is like a prison, with very high fences. The security procedures there reiterate the very restricted feel. Men are separated into compounds that house 70 or 80 people. They are not allowed to leave the compound freely, they must sign in and out to use the internet and to undertake interviews. To leave the compound they have to walk down a long corridor with a security cage at the end that they must pass through to get out. It is quite a harsh and oppressive environment to spend months and years of your life. The Centre is also very remote, and getting supplies there is complicated and costly. The ability to offer activities and excursions for detainees is limited by this remoteness. Limiting activities and excursions is not the will of the staff, it is a geographical challenge that cannot be overcome.

How about the detainees themselves, how did you find they were being treated, and from your visit, what do you think the long-term impact of detention is on asylum seekers?

We really saw people at the end of their ability to cope with what was happening to them.

We would experience situations where we were talking to a man and we would notice a raw red scar across his throat, or talking to a group of men who showed a red mark on the ground and explained that it was blood from a detainee committing self-harm minutes earlier.

Self-harm is rife throughout the centres.

Self-harm is rife throughout the centres. What the men told us and what we saw over and over again was that it wasn’t the torture, persecution or extremists that they had fled from that had led them to this state. What pushed them over the edge was spending months or years in an Australian detention centre. 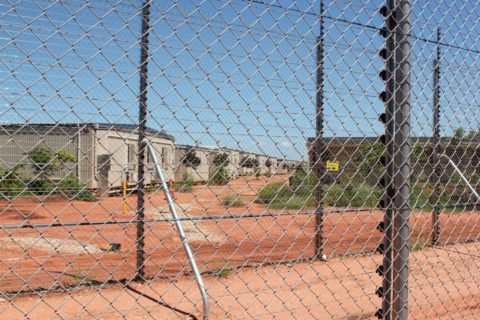 In your report you mention that some detention facilities are “overwhelmingly and unacceptably prison-like”. Can you please explain this statement, including what you think would be a better alternative in terms of how detention centres are structured and managed?

There isn’t the need for such harsh security measures in the Centres. The fences don’t need to be that high, the cameras don’t need to be that numerous. We saw examples of this across all centres including those for families and children, and those that were newly built such as the Centre at Wickham Point. This is a facility purpose-built to house vulnerable people, not criminals. It should not feel like a cage. The Centres should provide open pleasant environments. They should not make people who have fled unlawful imprisonment, torture or death threats feel like they are being put in prison.

In your report you outline several recommendations including a transition to 30-day detention for asylum seekers. Can you please explain a little about the practical benefits of this recommendation to both asylum seekers and the broader Australian community?

Amnesty International has argued for a long time that detention is not necessary after initial health and character checks. The trip reiterated how unnecessarily cruel detention is. Community processing allows asylum seekers to contribute to Australia while they wait to hear whether they are deemed to be refugees. Instead of locking up and traumatising people who by and large will end up becoming citizens, allow them to start finding work, settling into Australia and finding out how Australian society works. Allow them to volunteer at local charities and learn English. This would be better for asylum seekers and better for Australia as well.

The trip reiterated how unnecessarily cruel detention is.

Can you talk a little about the outcomes of interviews you had with staff and operators of detention centres such as Serco?

We spoke to staff in every agency working in every centre. Overall staff are trying their best to make an untenable situation work as well as it can. Serco staff across every centre mostly seemed to be trying to care for the asylum seekers that were their responsibility. The issue is not about the staff who are put in a very difficult situation, although there are definitely good and bad staff like in any organisation. We got the sense they were trying and there were people who went above and beyond for clients (asylum seekers). It is not about SERCO it’s about our Government’s policy of indefinite detention and that is what is destroying people.

How about your interviews with the Department of Immigration and Citizenship? Do you see ways to deal with some of the practical problems you have identified in your report within the current policy framework?

There are definitely improvements that can be made in each of the centres we visited. There are small operational matters within every centre that we’ll either talk about publicly or raise with the Department of Immigration and Citizenship. However while these are important, we don’t want to focus on them. Overwhelmingly it was the indefinite and long-term nature of detention that was the real issue.

What do you see as the first step towards implementing the recommendations made in your report? Are you optimistic that there will be future changes to the Australian immigration system?

I think we are seeing acknowledgment within government and by the Department of Immigration and Citizenship that detention policies are not working and that people need to be moved into the community much sooner than they are now. We saw a lot of people who had been in detention for a very long time and we want them to be moved out before any more damage is done to them. That is what we are asking for in the report and petition. It’s very hard to know what will happen in these strange political times but I think we are seeing positive signs that the Government is willing to consider other options.

…we are seeing acknowledgment within government and by the Department of Immigration and Citizenship that detention policies are not working and that people need to be moved into the community much sooner than they are now.