Nada Aldobasic is sitting across the table from me wearing her navy AIME jumper, a long day worn on her face and a swirled henna design on her hand. Nada is 21 years old and works as a program manager for Australian Indigenous Mentoring Experience (AIME), a program that supported her through high school and inspired her to persevere with and complete her criminal justice degree at RMIT University last year.

AIME provides Indigenous students with mentors who act as role models and tutors. The provision of educational content is a key focus, as AIME offers education support for students in Years 9 to 12. However, the mentors also educate students about being community-minded leaders and tackle issues of identity and racism.

“I did it for those rising in my family and community, to fight that fight for education. It’s so important.” With her own achievements, she has trodden a path for others. “It will be easier for them, those who come after”. She says this casually, but the impact of her example is already sounding loudly.

“When I was in Year 12, AIME came to my school. It was the first time they had come down to Melbourne.” AIME is a program based in Sydney.  “They offered their program to all the classrooms at my high school and gave the opportunity for anyone to take part. I was offered an AIME mentor… and it impacted my life,” she says. I look across at this articulate, passionate and educated woman before me. It’s difficult to imagine her struggling with schoolwork.

“In high school, bringing homework home was hard. I’d ask for help and mum would be like ‘just look at the back of the book’ but that wasn’t learning.” Having an AIME mentor gave Nada another person to talk to, someone who was educated and had time to listen.

In her first year at university, Nada came on-board as a mentor for the AIME program. In second year she was a program manager assistant and in her final year, a casual presenter.

AIME describes itself as a “dynamic educational program that is proven to support Indigenous students through high school and into university, employment or further education at the same rate as all Australian students”. As I read that mission statement out to Nada, she nods her head. “That’s right. It’s about closing the gap between indigenous and non-indigenous students.”

I ask her why she thinks education is so important and she pauses, squinting her eyes and tilting her head a little. “Well, I guess it provides a space to engage and learn in.”

“For indigenous people it’s also cultural education that is really important, like learning from our elders and being aware of our indigenous roots and identity. But more than that, it’s about learning to be connected and be whole with Australia.”  Nada says that the opportunities AIME provides encourage indigenous students to “fight the good fight that their elders started. That they have a right and opportunity to be educated”. 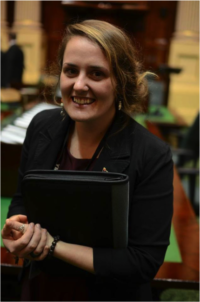 For Nada, her education and schooling were difficult because of her home life. Due to a lack of family education, she did not have the support base she needed to learn and flourish. Perhaps unsurprisingly, a divide between home life and school is not uncommon, particularly for indigenous students in Australia. Nada says it feels like two very separate worlds, and many indigenous students find themselves asking the question, “What is school going to do for my life when it’s so separate from life at home?”

There are also a number of other issues faced by indigenous students; from actually getting to school and the costs involved, to adjusting to a new community, battling cultural disconnect, establishing a coherent identity, and feeling isolated and alone. “AIME challenges these struggles. Like for me, AIME showed me there were other indigenous kids in my school. They made me feel connected and less alone,” Nada says passionately.

AIME also offers intensive outreach programs to indigenous students which take place on university campuses for six days. The purpose of these programs is to show students what is possible for their futures, and make higher education seem less foreign, and within reach.

At the core of AIME is its rollover mentality – there are many opportunities for those who have taken part as students to be involved later on.  It works because students feel identified and valued, and from this place of acceptance they grow, and after high school they go on to influence others.

A few years ago, Nada was part of the first AIME team to take part in the Victorian Youth Parliament, putting into practice her approach that “young voices need to be listened to”. This year the AIME team wrote a bill about the implementation of culture awareness in professional workplaces (departments of health, education and law). And it passed.

It was announced last month that Nada has been elected as Youth Governor of Victorian Youth Parliament for 2015. Her position will give her a platform from which she can encourage cultural awareness so that “indigenous voices can be out there and be heard”. She also hopes to uphold the vision of AIME: that indigenous education is vital and worthy of investment.

Nada’s personal mantra is “create footprints worth following”. And that is exactly what she is doing.

Shares
Comments Off on Create footprints worth following

Emma McDonald is a writer, currently working as a journalist for a publishing company based in Melbourne.