The Rohingya, described by the UN as “the most friendless people in the world”, are not recognised as citizens of any country and, unable to move freely, many have been forced into camps in Myanmar and Bangladesh. Myanmar has been accused of genocide against the Rohingya; Bangladesh of ethnic cleansing. Twice this year already, the UN human rights office has said that abuses suffered by the Rohingya could amount to crimes against humanity. 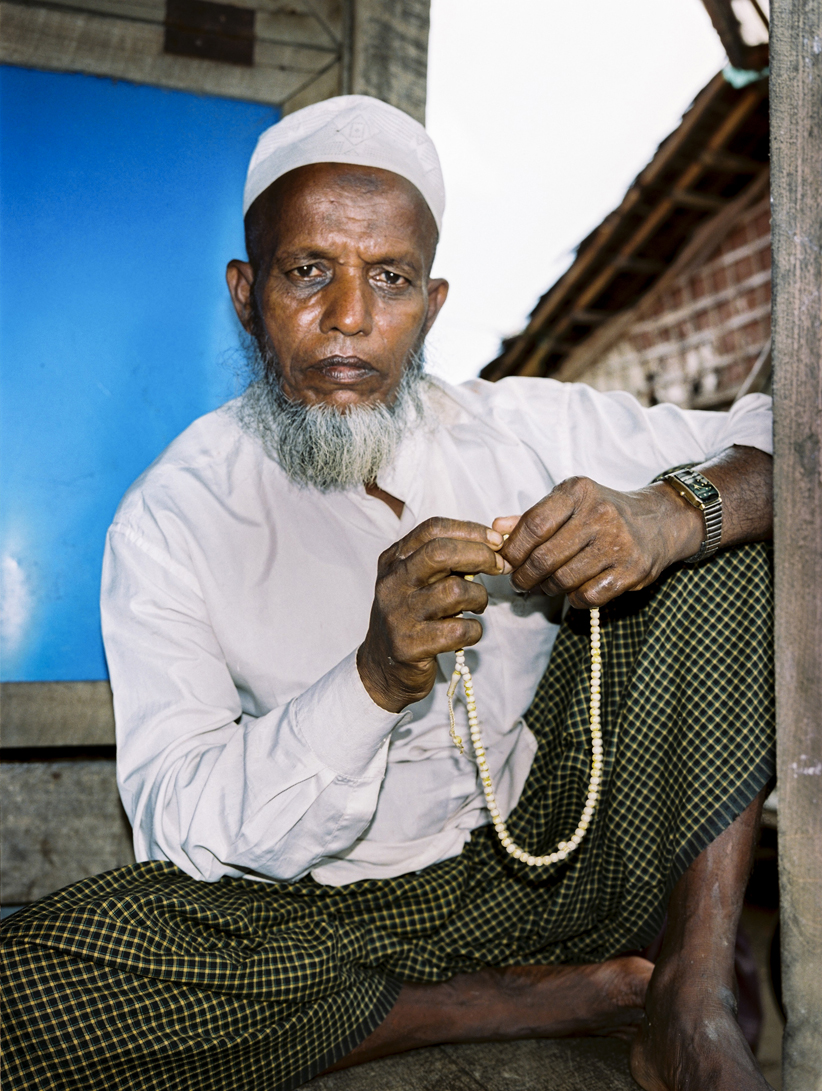 “Rohingya Muslim man in an internally displaced persons (IDP) camp outside Sittwe, capital of Rakhine State, Myanmar”. The Rohingya have been described as the world’s most persecuted people. A Muslim ethnic minority living predominantly in Rakhine State, western Myanmar, they remain a stateless people subject to extreme human rights abuse.

Growing up around Aboriginal communities was the catalyst for Australian photographer, writer, musician and human rights law professional Ali MC to devote his life and work to giving a voice to marginalised people. He has previously documented confronting sites and situations in places like Rwanda, Haiti and Ethiopia. In 2015 he released a punk rock travel book͛, The Eyeball End, about his experiences in forgotten parts of the globe.

He found the Rohingya more than willing to reveal their plight, despite the personal risk they faced by speaking out. “Many Rohingya want the world to know about their situation … in the hope that something might change for them,” Ali says. 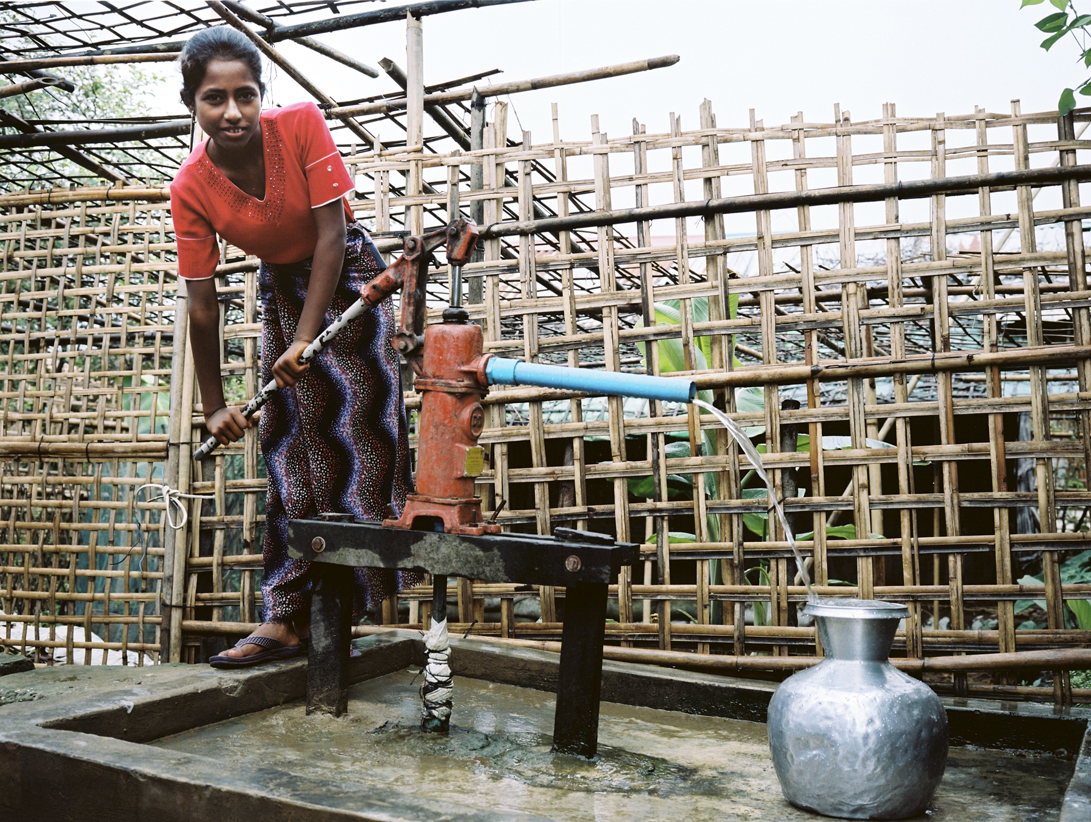 “Rohingya girl pumping water for the family.” Conditions in the camps are dire, with electricity generated by donated solar panels and water pumped from communal wells. Entire families of up to 10 people live in leaky one-room bamboo huts.

Ali says he couldn’t even begin to adequately describe how Rohingya see their situation, though he recalls one man saying they “feel they are in the middle of a vast ocean”. That comparison stayed with him. 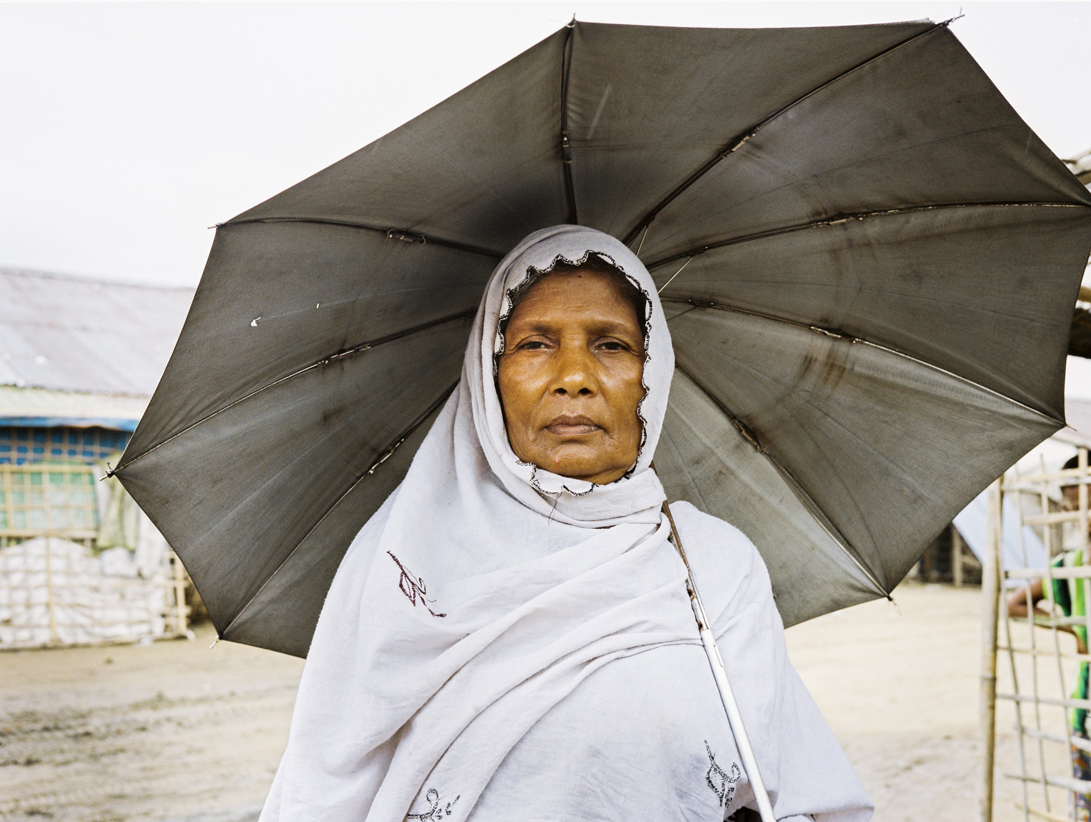 “Rohingya woman in IDP camp outside of Sittwe.” While previously holding the same rights as other Burmese people, Rohingya were excluded from citizenship under a controversial law in 1982. This means that, as non- citizens of Myanmar (or any other country), Rohingya cannot vote or hold office.

The Rohingya live in a state of fear and with a deep sense of despair. “Their families and communities are under constant attack, including rape, murder and the burning of villages and theft of land. The situation is awful,” Ali says. But like many marginalised peoples, he says they are “hugely resilient and survive despite the enormous adversity.

“There is a definite will to … keep their culture intact.” 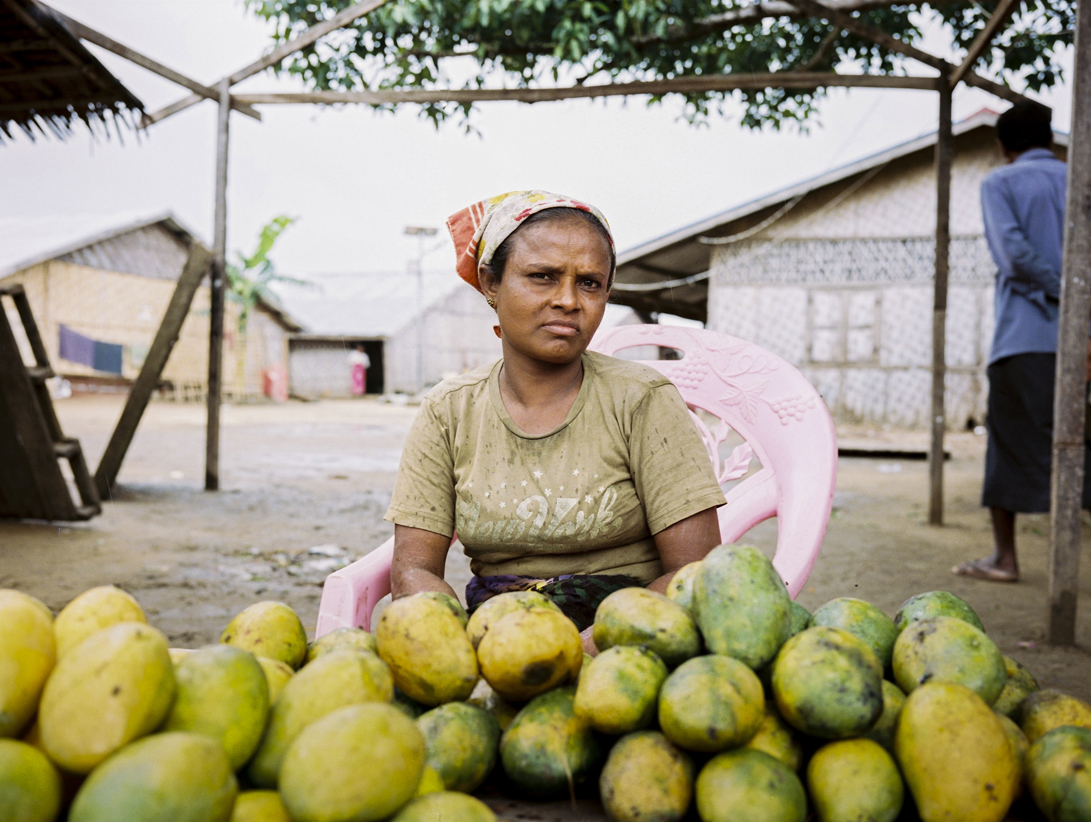 “Rohingya woman selling mangos at market stall.” Rohingya are believed to have migrated from Bengal to the area formerly known as Arakan in the 1600’s, with increased migration occurring during British colonial rule. After independence in 1948, the Rohingya essentially became stranded in what was then known as Burma. 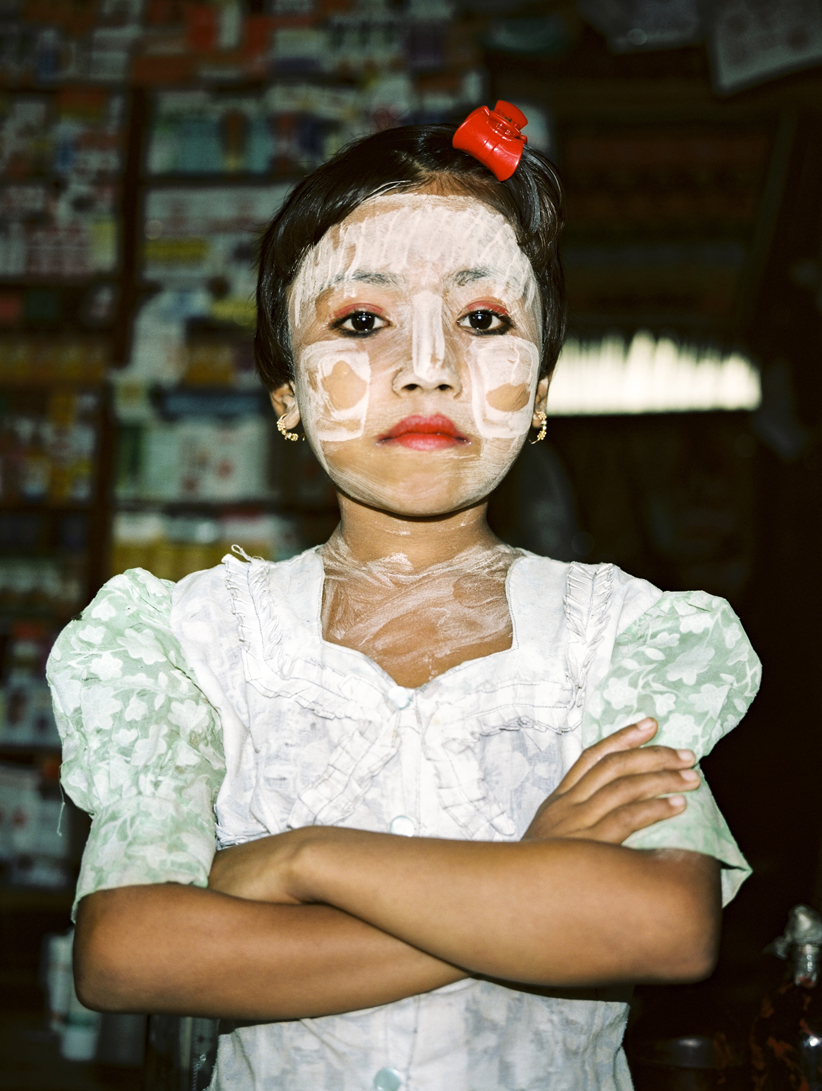 While the Rohingya insist they are from Myanmar, the Myanmar government insists they are not and officially classifies them as illegal immigrants. Legislation introduced in 1982 denies them citizenship. It is even illegal to use the word “Rohingya”; instead they are referred to as “Bengali”.

“Their long history in the area is denied, yet the people I met were keen to show me their identity documents dating back to the 1950s, as proof of who they are”, Ali says. 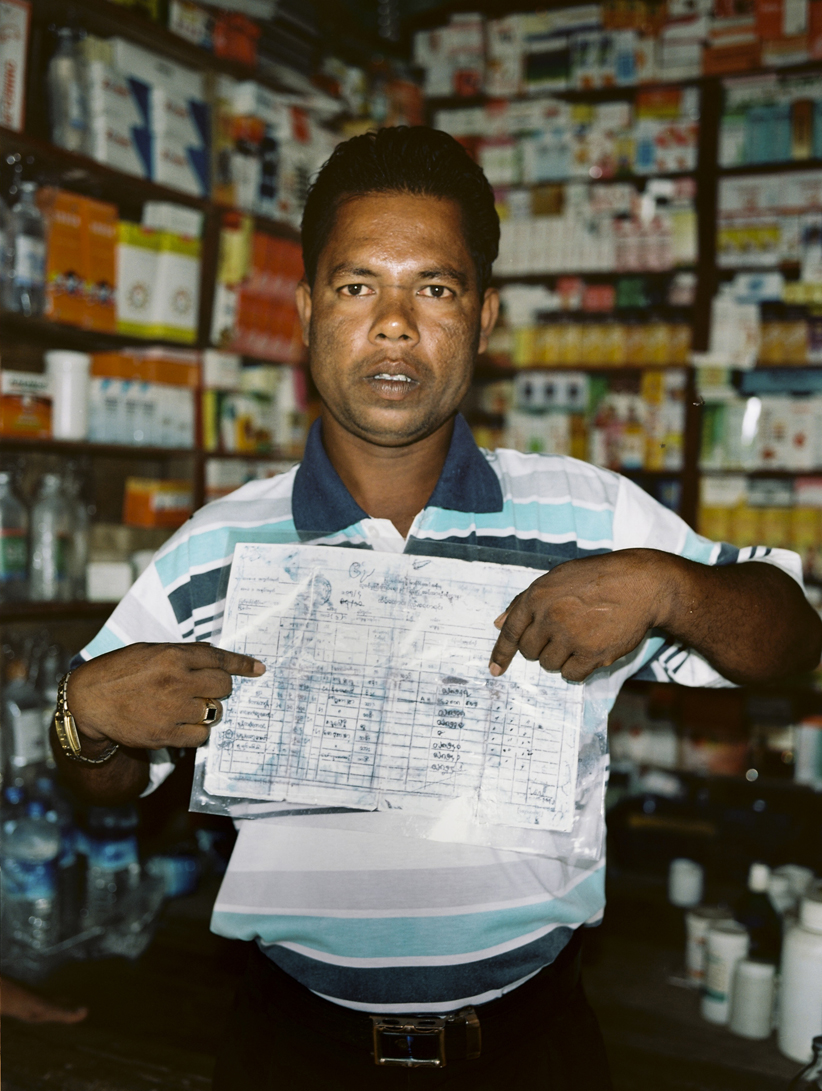 “Rohingya man holding a copy of official documents confirming his family’s Rohingya identity.” The Myanmar Government has long denied the existence of the Rohingya ethic group, instead labelling them ‘Bengali’ due to their Bangladeshi origins. Even under Aung San Suu Kyi, the ban on acknowledging “Rohingya” continues.

“There are a number of other ethnic conflicts currently in Myanmar, yet Rohingya are the only ethnic group who are outright denied citizenship”, he says. “Myanmar needs to accept Rohingya as one of the many ethnic communities that make up that country.” 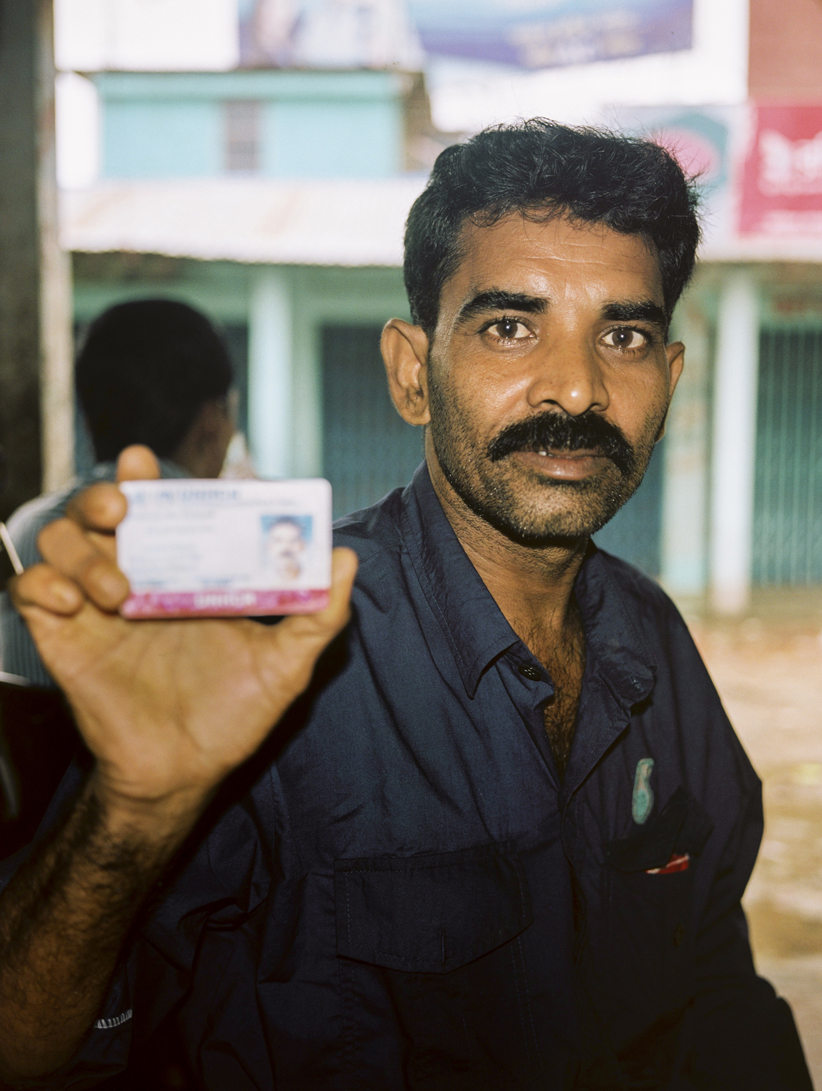 Aung San Suu Kyi, State Counsellor of Myanmar, has been criticised for her response to violence against the Rohingya, her silence over the 2015 refugees crisis and towards the continuing persecution of the Rohingya by the military since 2016. 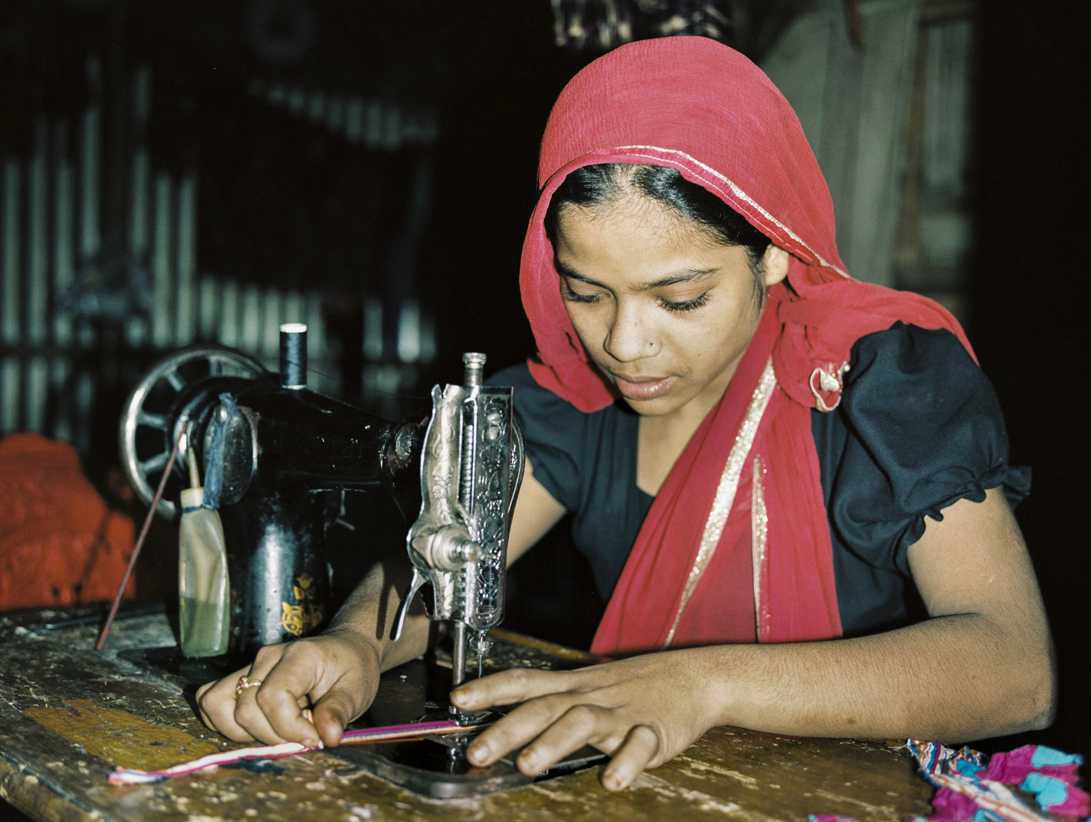 “Rohingya girl in Bangladeshi refugee camp sewing clothes for sale in the market.” The conditions in Myanmar see many Rohingya flee across the Naff River to nearby Bangladesh. But here the Rohingya are placed in refugee camps, where they are subject to continued abuses by Bangladeshi authorities and locals.

Ali believes Myanmar needs to repeal the legislation that denies the Rohingya citizenship, and the Australian government should be leveraging the amount of aid it provides to Myanmar as a means of pressuring it to do so. “However, there are minerals and natural resources there to be exploited, so, much like West Papua, Australia remains silent on human rights atrocities,” he says. 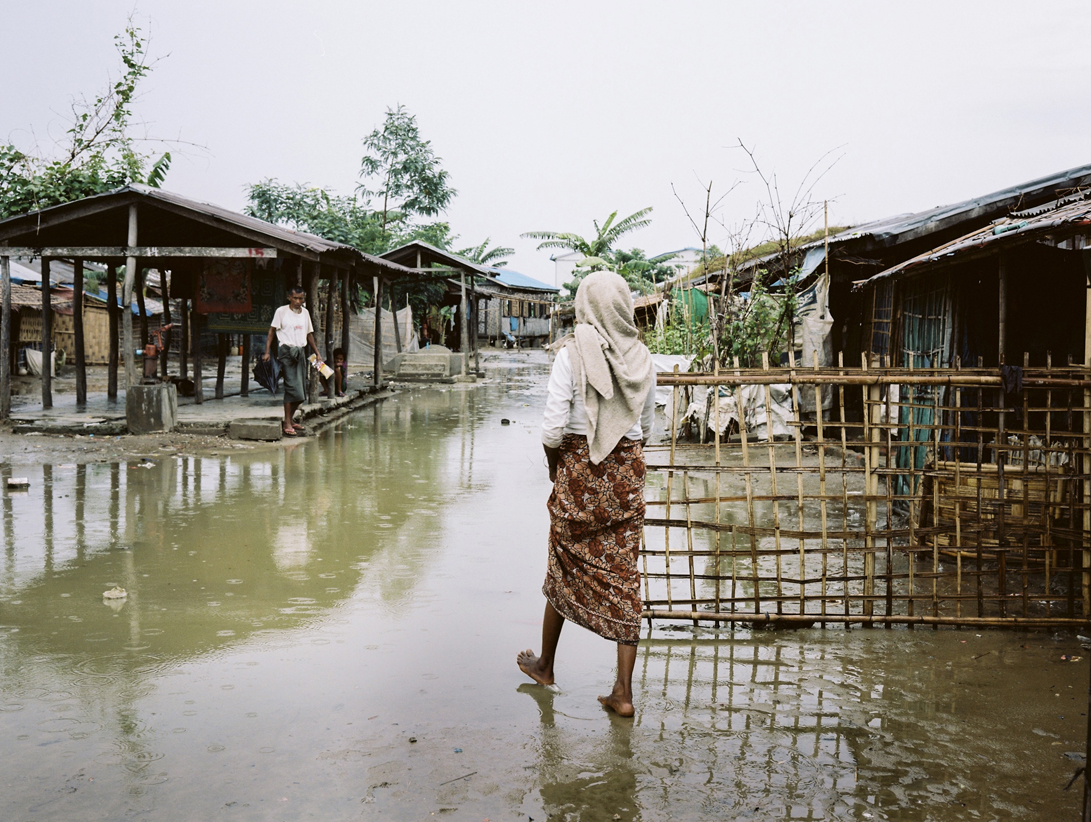 “Rohingya girl pumping water for the family.” Since fighting erupted in 2012, many Rohingya communities have been attacked and burnt to the ground, while those located in the state’s capital, Sittwe, have been forcibly moved into nearby IDP camps. Those who remain in their villages are subject to violent attacks by militant Buddhists and the Myanmar Government Army, also known as the Tatmadaw.

Of his personal response to this and other human rights tragedies he has witnessed, Ali says he “waivers between feeling ultimately grateful that I live in a safe, wealthy country and outright sadness about the people I’ve met and the situations I’ve experienced. Using my experiences to educate others seems to help though and hopefully some change will occur through things like my exhibition and book.” 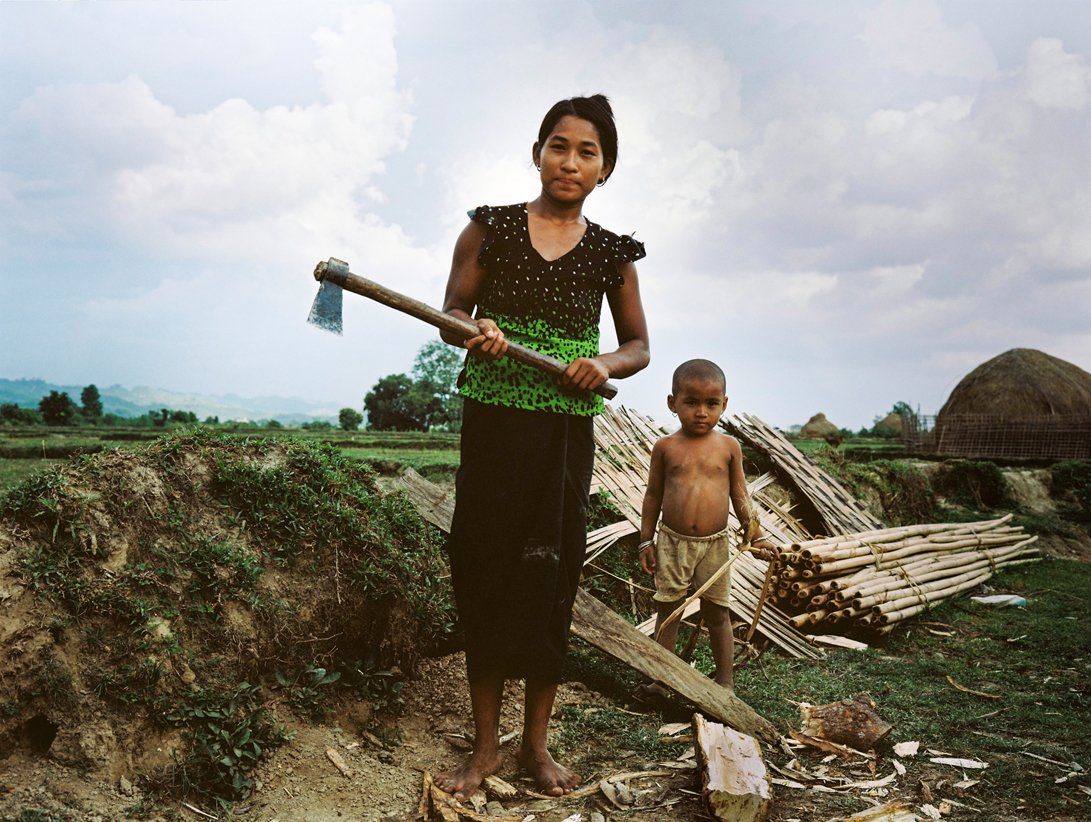 “Myanmar girl working in IDP camp due to Arakan Army fighting.” Rakhine State is the second poorest area in Myanmar, in which sees the Arakan Army are currently fighting an internal war against the government. Unrelated to the Rohingya situation, this protracted fighting sees many other Myanmar people displaced and forced into other IDP camps.

The portraits for Rohingya: Refugee Crisis in Colour were shot on film, using a medium format camera. “I prefer to concentrate on making a film photo really work, as opposed to taking hundreds of digital photos,” he says.

Media are of course banned from the camps and at one point during the trip, Ali was arrested and his phone was searched for photos. “Fortunately, the Army guys didn’t really figure out my film camera.” 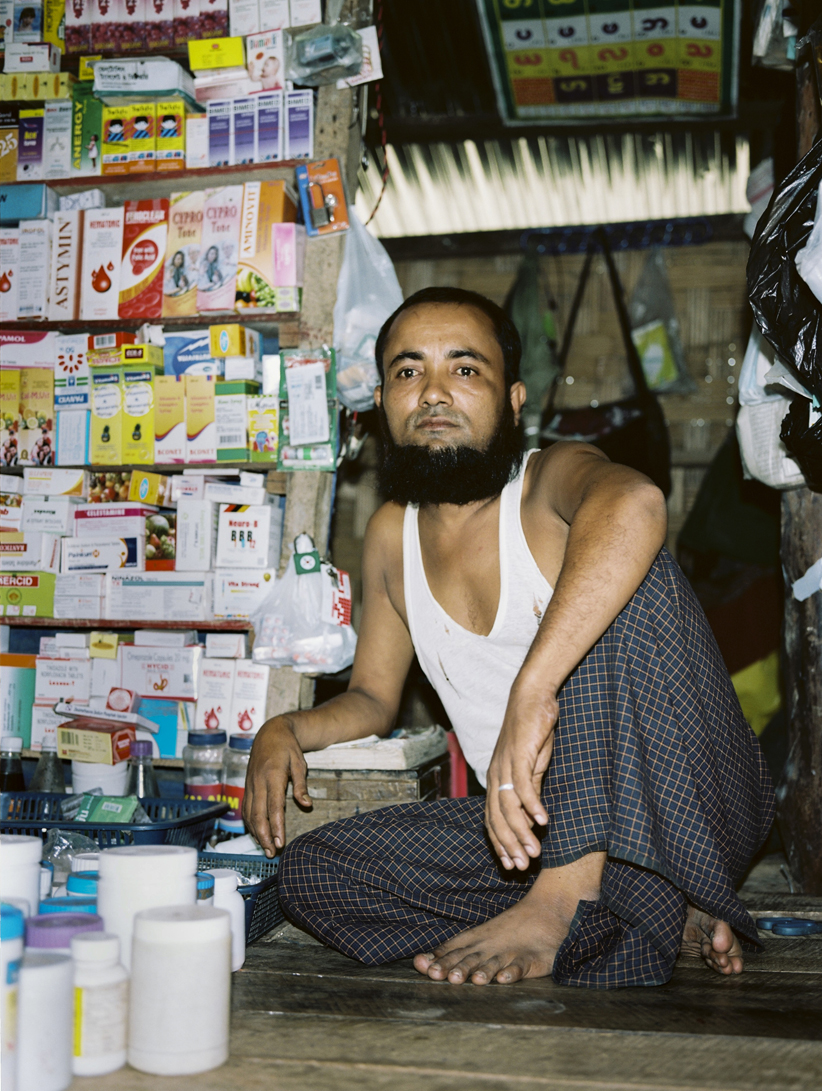 “Rohingya man selling medical supplies in market.” It is illegal for anyone to leave or enter the camps and villages without prior permission. Apart from some assistance from international NGOs, the Rohingya in IDP camps lead an isolated existence.

Of all the Rohingya people he met, Ali says the father whose son had polio stands out most in his mind. “Even though his son was in a destitute condition, his father still wanted to sit him up and take a dignified photo. I had to respect that, and that’s the photo that ended up in the exhibition.” 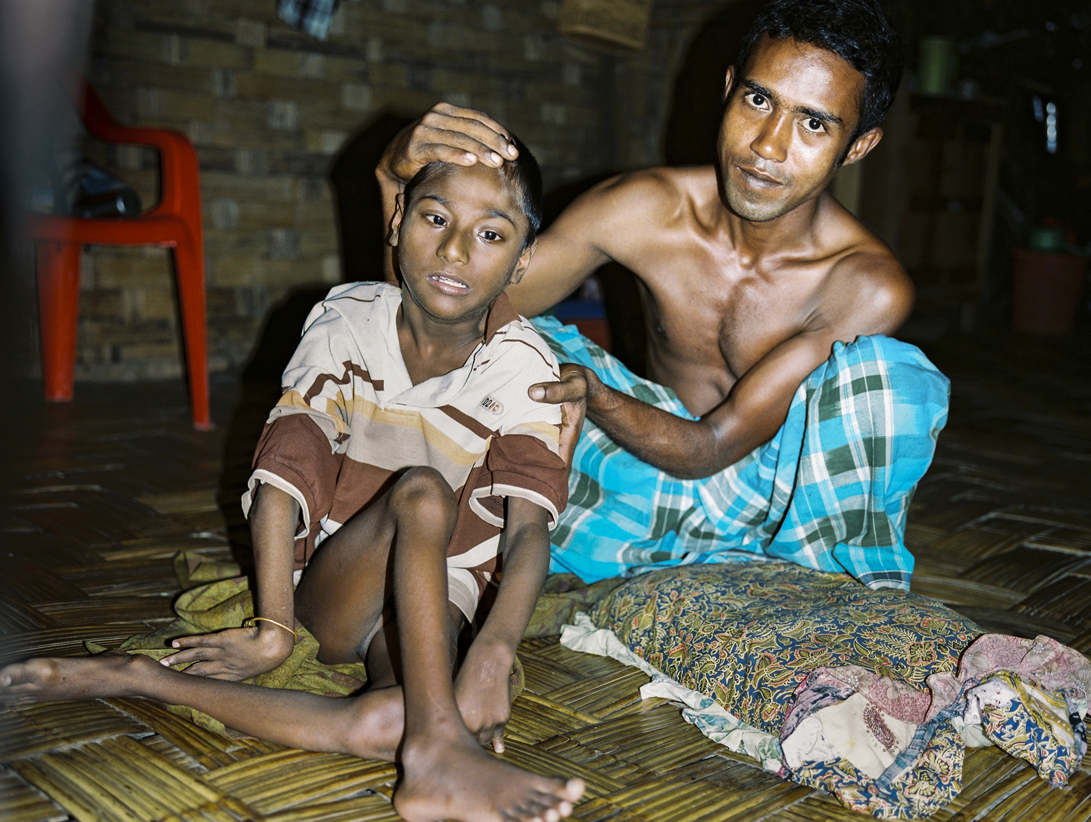 “Father holding polio-stricken son.” Rohingya also have stringent restrictions placed on their freedom of movement and access to amenities such as education, hospital and medical assistance.

Ali aims to get the exhibition shown in as many places as possible and to continue to raise funds for Rohingya people, who are in desperate need of medical aid and education supplies. 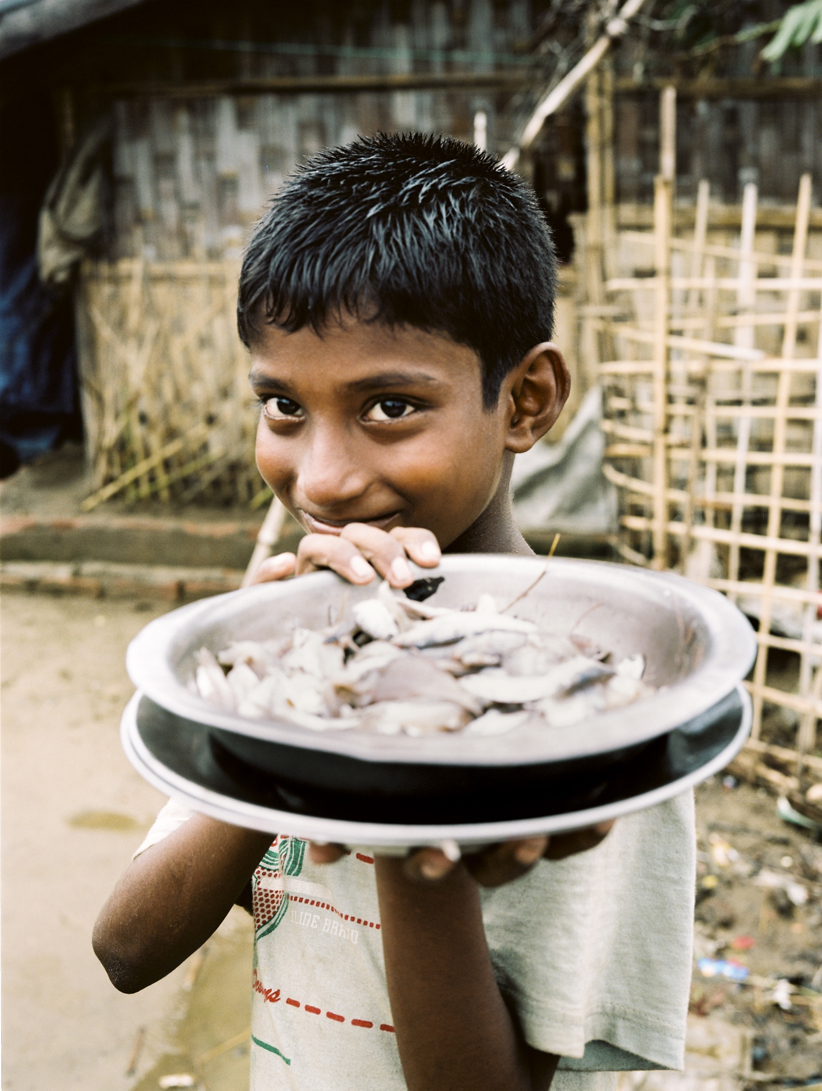 “Rohingya boy in IDP camp, holding fish caught from a nearby river.” Fighting continues in Western Myanmar, with reports of massacres and atrocities of Rohingya people by government forces. With little international support, the Rohingya essentially remain trapped in between the two countries, with neither recognising them as citizens. As such, the Rohingya remain a persecuted, stateless people with nowhere to go.

Rohingya: Refugee Crisis in Colour is showing at Fitzroy Library, 128 Moor Street, as part of the 2017 Human Rights Arts and Film Festival, until 26 May. A photo book is also available from Ali MC’s website.

Ali MC is a photographer, writer and musician and Human Rights Law Masters student. As well as traveling extensively overseas, he has also lived in remote Aboriginal communities teaching music and learning language. His first full-length book The Eyeball End was published in 2015, and in 2016 he produced a fourth album, Urban Cleansing, through his music collective New Dub City.

All photos by Ali MC.

Vanessa McQuarrie is a Sydney-based journalist, photographer and content producer.