Social enterprise No Fixed Address (NFA) shows tourists and locals around the colourful streets of Melbourne’s inner suburbs, guided by those who know the streets more intimately than most.

Before moving to Australia, Jo Jenkins lived in London where she worked with young adults looking for employment. She invited a vendor from the The Big Issue to give a motivational talk, and impressed by his public-speaking ability and drive, she kept in touch with him. Not long after, he told her about the walking tours of London he’d become involved in. “His eyes lit up and I could tell he really enjoyed it,” she says.

Sock Mob, as she came to learn, is a not-for-profit that offers tours of London run by those without a permanent address. When Jo moved to Australia she couldn’t find any similar projects, and she thought Melbourne – “a progressive, socially-conscious city” – would be the perfect place.

Consequently No Fixed Address was born, and Jo set out to map the routes, employ tour guides, and get NFA’s name out there.

“Our goal is to provide sustainable employment and independence for people who have experienced homelessness and are still unemployed and living in supported housing,” she says.

Jo has been working in employment services for the majority of her professional life, assisting the homeless to find jobs. A job is more than just having money and having a place to be from nine to five, she says. “Being busy and in a routine helps maintain good mental health. It gives you confidence and motivation; earning money allows you to start achieving goals. It gives you a real sense of independence.”

One size doesn’t fit all

According to Jo, an ongoing issue with helping the homeless is the friction caused by the system’s uniform approach to a group with decidedly non-uniform characteristics and needs. Some will always be more difficult to “place” in traditional employment than others.

“I believe that people who are unemployed but with a disability, or homeless, or over 50, or young and just out of uni, or with issues with dependency, are all different and cannot be dealt with by one generic approach. Funding for specific contracts is needed.” 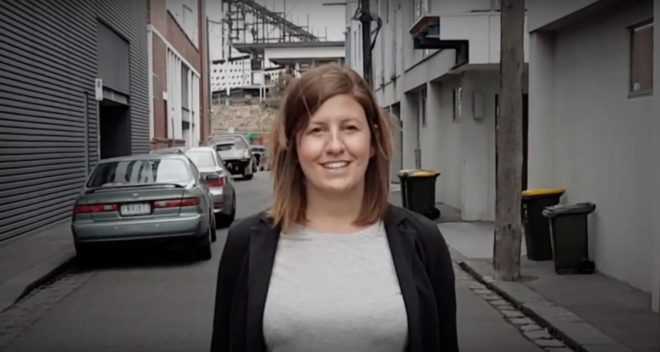 Jo describes employment as “key to all people’s improvement or maintenance of life – not just the homeless.” Her experience has made her a firm believer in giving people a chance, and she hopes more employers learn to do this, rather than accepting common misconceptions or concerns about lack of experience.

“The guides I work with have fascinating backgrounds, are very articulate and have great transferable skills that can be used in many roles,” she says.

While Jo works hard to map out the routes, the guides’ contributions are just as important, and it is their input that helps give NFA’s tours a distinctive local perspective and sense of being Melburnian.

Pete and Mark, who are NFA’s resident tour guides at the moment, are wonderful ambassadors for the organisation. “They have been and continue to be a pleasure to work with,” Jo says. With three more guides ready to come on board, Jo is in the midst of getting more tours up and running so that she can provide even more job opportunities.

Tours centred on the cultural and historical landmarks of Melbourne

The two tours currently offered by NFA are the “City by the Yarra” and “Pride of Old Fitzroy”. The former concentrates on Collingwood and Abbotsford, visiting Dights Falls, the Collingwood Children’s Farm and Abbotsford Convent. It also follows the Yarra, where guides talk about the rich Indigenous cultural history of the area. There are plenty of skyline views and historical buildings along the way, with the Moondog Brewery a welcome stop for thirsty tourists as the tour draws to a close.

The “Pride of Old Fitzroy” tour showcases the outstanding architecture and tree-laced streets of the inner north, with stops such as Edinburgh Gardens, Rose St Market and lots of retro advertising signage along the way.

The tours are local through-and-through, with the tour guides bringing a unique perspective to the experience. Jo says NFA goes for a holistic approach: “You will see nature, suburbia, old warehouse-turned-apartments, street art, historical landmarks, cultural and Indigenous history and great photo opportunities.”

“There are lots of good resources for homeless people in Melbourne and more and more great initiatives popping up,” Jo says.

Some of these initiatives include SleepBus, HoMie, Streat and Suspended Coffee Society (SCS). These organisations are reimagining the approach taken to helping the homeless, and are using crowdfunding, social enterprise models and measures that empower the homeless. Each initiative has accomplished discernible improvements in the provision of food, care and shelter for those suffering homelessness.

SCS has been operating since 2013, and now has 83 participating cafés as close to the city as Fitzroy and Richmond and as far as Torquay, Kinglake and Ballarat. The idea is simple: those with a little extra change can pay for a warm beverage for someone who can’t afford it. Starting out with suspended coffees, as they’re known, has led to suspended sandwiches and whole meals being purchased in advance for the disadvantaged.

SleepBus plans to build buses fitted out with 22 beds, eight pet kennels for canine companions, and TVs, which will advertise services for pathways out of homelessness, as well as keep the drowsy overnight inhabitants entertained. SleepBus will provide a cosy and warm place to sleep for up to 8,000 people each year.

While Jo acknowledges that there is more to do, she is proud to be part of an active and passionate community of people and organisations pioneering new approaches to helping those in need.