By Meleesha Bardolia. This piece is part of our December 2012 and January 2013 focus on Asylum Seekers.

People are sitting on the edge of Victoria Street, hunching over, legs angling apart. Saving their threads from psychedelic splatters of tandoori and dollops of tzatziki, Melbournians perch outside the Queen Victoria Night Market and feast. Entering the corridor of stalls, I am welcomed by competing sizzles.

Walking through the hot spray of sizzling prawns wafting from the vats of paella, I am offered boomerangs, swags, akubra hats, mah jong sets, ayurvedic foot massages, saris, bonsai trees, kimonos, Peruvian handbags and Maasai necklaces. Past this string of offerings, laid out like a chronology of cultural influence in Australia, the stall I was searching for blooms out of the pavement. Sixteen women are seated behind a table that displays handcrafted jewellery, baskets and dolls.

I wait for a sales pitch.

One woman smiles nervously. I had expected this.

I run my fingers along a row of bangles. The woman who shrunk at my approach now gets up and gestures to her handicraft lying next to the handmade dolls.  One item is a beaded bracelet patterned with triangles of red, black, green and yellow; the colours of the Zimbabwean flag. The other is beaded in black and white and says ‘Go Collingwood’. This is the first night that the stall is in business. A neat pile of business cards is stacked next to the youngest woman seated at the end of the long plastic table; a hopeful full stop at the end of the row of tired faces, a union of invisible tales, sitting behind the makeshift counter. I pick up the card and turn it over.

Three months ago, Luz Estela Restrepo handed me the same card. In 2010, Luz left behind a life in Colombia as a medical doctor and an advisor to multinational companies to seek asylum in Australia. Now, Luz is a social entrepreneur whose aim is to empower asylum seeker and refugee women in Melbourne.

When she arrived as a non-English speaking migrant, she felt as if she were “nothing”. Her inability to communicate her ideas devastated her sense of self-worth. Getting a job was revealed to be less than a thinly veiled prospect and more of an opaque impossibility when Luz discovered that her qualifications were useless in Australia. Initially, Luz wanted to study a Master of Sociology with an emphasis in women’s studies. To access tertiary education, she needed a visa and at least a competency of level 7 in English. In other words, every opportunity in this country depended on her ability to improve her English.

Upon arriving in Australia, Luz met women who had been here for years who could not speak proper English. In Luz’s eyes, when women arrive here “without language”, they develop low self-esteem. Their husbands leave for work. Their children leave to study. Men and children improve their English but the “women go back”.  Women stay at home and are prevented from working and immersing themselves in an English environment. In this way, for Luz, there is “no equality” in the English learning process for asylum seekers. The challenge is to find a way to push women to work in an English-speaking environment in order to gain self-confidence in their new country.

In February 2011, with the help of the Asylum Seeker Resource Centre (ASRC), Luz began a two-year Diploma in Community Development at the Chisholm Institute in Frankston. She said that this activity “changed her life”.  As part of her course, she has completed a placement at Springvale Community Aid and Advice Bureau. Inspired by the content of her course, Luz’s language skills improved exponentially. In Luz’s words: “If we can study something that is our passion, it’s easier to learn English”. Not having the opportunity to learn English in a subject area or context about which one is passionate is the difficulty that thwarts the progress of many asylum seekers and refugees.

For Luz, it is important that asylum seekers and refugees are given the chance to contribute to Australian society so that they can “break myths”. Identifying the possibilities for refugees who were professionals in their home countries to use their skills in Australia is the crux of the difficulty for successful integration. If migrants do not learn English, their occupational aspirations are limited to cleaning and factory work. As a result, “there are many professional people who want possibilities here but become depressed and cannot attain their goal”. From Luz’s viewpoint, “it is important to push them and give them educational and networking opportunities, not just English classes”.

After studying community development, Luz feels that she “can be useful in this country” and that she can “do many other things”. In spite of this, Luz laments that her success is an anomaly or at least, is still seen as anomalous. I’m not sure which is worse. She argues that misconceptions about asylum seekers could be dispelled if they were given the opportunity to supplement their language education with a vocational education. Recognizing the potential asylum seekers have to be professionals, or to continue their work in their previous professions, provides them with what Luz sees as a basic need: “all of us have the right to look for our best life.”

To create this possibility, in February 2011, Luz developed her own social enterprise initiative called Handmade by Multicultural Women.  She gathered women from Bhutan, South Sudan, Pakistan, Peru, Colombia, Burundi, Burma, Iran, India, Iraq and Chile into an entrepreneurial group that sells handicrafts at different market stalls around Melbourne. They support each other by speaking English when they sell their creations at the markets. They gain a sense of empowerment and develop economic and social independence from leaving home for their own activities. Last year in Casey, Luz organized the logistics of the market-selling and craft production for twenty-one women at the Aussie Hands Bazaar and Multicultural Festival.

At the time of this interview, Luz was waiting to see if her application for a stall at the Suzuki Night Market at the Queen Victoria Market was successful and was looking for grants that would enable her to provide retail training for the women. “Most of them are very shy. They don’t look customers in the eye or try to chat with customers. I provide the logistics but they need training”. The aim is to find volunteers who are able to teach the women about production and selling.

In the long-term, Luz would like to work as a social project worker who can organise different social enterprises to specifically help asylum seeker women identify and contribute their diverse skills to the Australian community. For now, her short-term goal is to assist these women by finding opportunities for them to sell their handmade creations at markets around Melbourne.

At the end of the interview, Luz hands me a tangible index of what I thought was merely an idea. I put her business card in my wallet.

Luz is not at the stall tonight but more customers have arrived and it’s beginning to get busy.

Holding both bracelets in each hand, I ask the woman if I can buy the Zimbabwean bracelet she made. She looks me in the eye and chuckles at my redundant question.

She seals my bracelet in a small brown paper bag and gives me the change.

As she sits down, the other women raise their eyebrows and give her encouraging smiles. I leave the stall and walk with the throng to escape to the coolness of Victoria St. On the way, I buy a Korean potato twist and as I walk through the honeyed perfume of freshly glazed loukoumades, listening to the ragged beat of an African drum, I wonder if the ‘Go Collingwood’ bracelet will remain unsold or if it will end up at the MCG on a fan’s wrist. An articulation of hope, handmade. 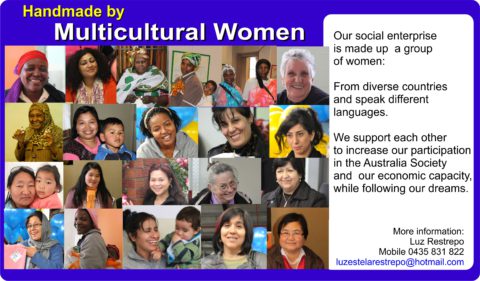 Handmade by Multicultural Women will have a stall at the Suzuki Night Market until March.

Meleesha Bardolia is a graduate of Honours in Literature from the University of Melbourne. She is a freelance writer and aspiring filmmaker. Meleesha is an Education Administration Assistant at the Asylum Seeker Resource Centre and the recipient of a 2013 Wheeler Centre Hot Desk Fellowship. As part of her residency, Meleesha plans to write a novella entitled ‘Waiting Upon Arrival’.